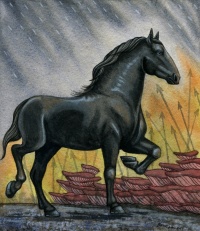 Gallant is a "full" (presumably purebred) Ryshadium.[2] He resembles an ordinary horse, but is approximately two hands (8 inches) taller than a typical stallion.[1] Even the largest normal horses look like ponies next to him.[3] He has the ideal build for a warhorse, and is more squat and robust than other Ryshadium.[4] He has a black coat and blue eyes with rectangular pupils.[4][2][fn 1]

Like other Ryshadium, Gallant has a spren bond that makes him self-aware to the point of near-sapience.[5] Gallant chose his rider, Dalinar Kholin, and they have a special relationship.[1][6] Dalinar is the only person that Gallant will allow to ride him, although he once grudgingly allowed Adolin to ride him temporarily at Dalinar's request.[4] Adolin felt very strange riding Gallant in lieu of his own Ryshadium, Sureblood, and believed that if a battle broke out, Gallant would immediately throw him and seek to protect Dalinar.[4] Dalinar is able to recognize various complex emotions in the animal's features, such as shame and pride, and Gallant is very attentive towards Dalinar.[2] Gallant has a strong sense of responsibility toward his rider and a good understanding of the warcamp's routines: he once kicked his stall door down and went alone to the staging area for Dalinar's army when a groom was too slow at getting him ready for battle.[7] Gallant's intelligence means that he generally does not really need a groom at all, and he displays annoyance when inexperienced people try to lead him.[8] Adolin also believes that he likes to show off.[6] He enjoys crispmelons and sugar lumps as treats.[2][6]

Gallant is the ideal warhorse for a Knight Radiant. He is incredibly strong and is not bothered by someone in full Shardplate jumping onto him, which can sometimes break the back of an ordinary horse.[1] He is exceptionally fast even when carrying a rider in Plate[1] and is seen carrying three wounded men from the battlefield with ease.[9] His bond with Dalinar allows them to work together seamlessly in battle, and Dalinar can direct Gallant with his knees while he wields his Shardblade.[10] Gallant is intelligent, fearless, and loyal, and appears to have excellent stamina. He also has stone hooves, which are presumably far more durable than ordinary hooves and do not need to be shoed.[6] 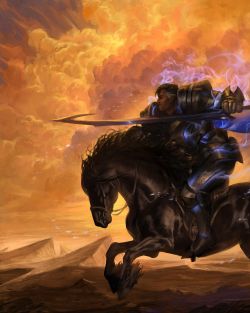 It is not known exactly when Gallant first met Dalinar, but it was presumably at some point after the razing of Rathalas circa 1163, when Dalinar was still riding a conventional horse.[11] By the time of the War of Reckoning, Gallant and Dalinar almost always rode into battles and chasmfiend hunts together. Gallant was one of only twelve Ryshadium in the warcamps at the Shattered Plains,[1] and merely seeing him could inspire the soldiers of the Kholin army.[7] Dalinar would often begin battles wielding Oathbringer from atop Gallant, then dismount when he believed that Gallant could be in danger from close-quartered fighting.[10]

Dalinar was riding Gallant during the chasmfiend hunt when Elhokar had a problem with his saddle and fell off of his horse. When Dalinar quickly tried to come to Elhokar's aid, the chasmfiend's tail slammed into Gallant and Dalinar was thrown to the ground.[9] Despite the direct hit, Gallant suffered relatively minor injuries, and recovered quickly.[12] He seemed to feel that he had failed Dalinar, but Dalinar was able to speak to him and convince him that he did nothing wrong and still deserved extra feed, which Gallant would have otherwise turned down.[2]

Gallant was also present at the Battle of the Tower. Dalinar rode into battle on Gallant, and Gallant later helped evacuate wounded soldiers.[9] Near the end of the battle, a riderless Gallant somehow appeared near the area where Dalinar was dueling Eshonai even though he was supposed to be on another plateau. Gallant appeared to want to help Dalinar, but was held back by Parshendi soldiers.[9]

Gallant moved with Dalinar to Urithiru after the Battle of Narak. He was given his own large field in the Kholin section of the tower despite cramped quarters for other animals. Gallant seemed to be kind to Adolin while he was mourning Sureblood, although that kindness did not extend to allowing Adolin to ride him.[6]

Dalinar became busy with his duties with the Coalition of monarchs, and didn’t have much time to spend riding Gallant. Adolin began taking care of Gallant and partially bonding to him, and they formed some trust. Adolin was grateful to Gallant for that, though Gallant still missed Dalinar.[13] Gallant joined the delegation to Lasting Integrity with Adolin, carrying much of Adolin’s gear, including a variety of weaponry.[14] He let Mayalaran ride on him, and was extra gentle with her. Adolin was comforted that Maya was with Gallant, trusting the horse to take care of her.[15]

Gallant seemed to instictively know what Adolin needed from him as without explicit signal he galloped towards a running Adolin to rescue Notum.[15] When Adolin was rescuing Notum, Gallant helped somewhat by distracting the Tukari soldiers when he charged into the battle, snorting.[15]

This page is probably complete!
This page contains most of the knowledge we have on the subject at this time.
It has yet to be reviewed.
Retrieved from "https://coppermind.net/wiki/Gallant?&oldid=161691"
Categories: