“Smoke curled from the occasional patches of growth or heaps of burning corpses. Even some sections of rock smoldered. The Dustbringers had done their work well. ”

The Order of Dustbringers is an order of Knights Radiant on Roshar.[2]

The Dustbringers are Surgebinders who control the Surges of Division and Abrasion; they are associated with the ruby polestone. They form Nahel bonds with ashspren.[3]

The Dustbringers dislike their name due to its similarity to Voidbringer, and want to be called Releasers.[2][4]

The Dustbringers believe that great power requires a strong will to control it, and their oaths are designed to teach them to control their destructive power. While their powers can be used to destroy large swaths of land, acting like artillery, they prefer to work in a more controlled and nuanced manner.

Most Dustbringers are tinkerers who like to take things apart to figure out how they work. They often object to those who only focus on the destructive side of their powers, as they feel that it is impossible to create something without understanding how its pieces work. The order also attracts foolhardy-but-brave soldiers who try to control the destructive nature of war to protect innocents.[4] They also tend to have the most variety among the Radiant orders.[5]

The Ideals of the Knights Radiant, also known as the Immortal Words, are a set of rules by which the Radiants live. The First Ideal is shared by all of the orders, and is used as a motto for the Knights Radiant as a whole. The four remaining Ideals are unique to each order.[6] The Ideals of the Order of Dustbringers all focus on responsibility and controlling one's power, and are designed to teach lessons about the nature of power and the responsibility that comes with it. Unlike members of most of the other orders, the Dustbringers cannot access all of their Surgebinding powers until they have sworn some of the higher oaths.[4]

—The First Ideal of the Knights Radiant[6]

The Second Ideal of the Dustbringers is focused on self mastery.[4]

Dustbringers can use the Surges of Division and Abrasion. Like most Knights Radiant, the Dustbringers have squires; one Dustbringer from one of Dalinar's visions had about a dozen.[7]

Division gives Dustbringers the ability to cause objects to burn, degrade, or turn to dust. They appear to have a great amount of control over this ability, as Malata engraves a table using this Surge. Division also works on living flesh.[3] Dustbringers do not have access to the Surge of Division until later Ideals.[4] Restricting access to Surges based on oaths is rare among the orders and few do it. The only other order currently known to do so are the Skybreakers, who share the Surge of Division. 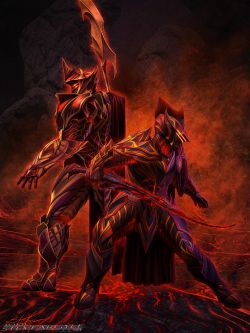 “And when they were spoken of by the common folk, the Releasers claimed to be misjudged because of the dreadful nature of their power; and when they dealt with others, always were they firm in their claim that other epithets, notably "Dustbringers," often heard in the common speech, were unacceptable substitutions, in particular for their similarity to the word "Voidbringers." They did also exercise anger in great prejudice regarding it, though to many who speak, there was little difference between these two assemblies. ”

Before the Day of Recreance, many Dustbringers objected to the name of their order, as they felt it was too similar to "Voidbringers," and encouraged others to instead call them "Releasers,"[2][4] though most people still referred to them as "Dustbringers".[9] This naming preference may have been influenced by their spren, as Spark apparently passed it on to Malata.[10] The Dustbringers were often misjudged by people because of the destructive nature of their powers,[2] and even some of their fellow Knights Radiant felt they were "on the edge of evil" and did not get along with them.[11] The Skybreakers, who often made sure the Radiants didn't abuse their power,[12] were particularly concerned about the Dustbringers, despite the fact that the two orders had much in common.[11]

Historically, the Dustbringers often functioned as sappers, engineers, and strategists for the Knights Radiant.[4] During the final battle of the Last Desolation, they used their powers to great effect, resulting in burnt plants and corpses and smoldering rock.[1] In one of Dalinar's visions, a Dustbringer and several of her squires hunted a spren that had been corrupted by Sja-anat and then fought a thunderclast.[7]

The first known ashspren to initiate a Nahel bond since the Recreance is Spark, who bonded Malata. Many of Spark's friends were killed in the Recreance and she claims that her only objectives with the bond are to get revenge and break things; this attitude appears to have played a role in Malata's acceptance of the Diagram's decision to side with Odium.[3] It appears that at least a few other ashspren have initiated bonds since Spark did, but it is unclear whether any of them and their Dustbringers will also decide to side with Odium.[13]

Dalinar's coalition may be beginning to suspect that not all Dustbringers are loyal to their cause, as Lopen asked Ral-na not to talk with the other Dustbringers, so that he could find his own path, and said there were political reasons for that request.[13] Jasnah also suspected them of rebellion.[14]

This article is still missing information. Please help The Coppermind by expanding it.
Retrieved from "https://coppermind.net/wiki/?title=Order_of_Dustbringers&oldid=167179"
Categories: