“Someone should have warned me how fun this would be. I’d have tried way harder to land the job. ”

—Malata, regarding her job as the Diagram's Knight Radiant[1]

Malata is a woman from Jah Keved and a member of the Diagram. She is also a Knight Radiant of the Order of Dustbringers, bonded to an Ashspren named Spark.

Malata is a Veden lighteyed woman of middle-age, with short, black, boyish hair. Her usual attire is described as a Thaylen style, with a skirt, leggings, and thick boots.[1] She also wears gloves on both hands.[2]

Having been informed by Spark of her Order's distaste for the term Dustbringer, she has adopted the Order's preferred epithet Releaser for herself[3][2], although those around her still refer to her as a Dustbringer.[4][5]

Malata behaves in a very confident manner even in the presence of royalty. She is not afraid to challenge social conventions when she sees fit, as when she exposes her safehand while demonstrating her powers. She does not seem to care about the ethical issues of the Diagram's actions, or that her spren wants to punish humans for the Recreance. Rather, she seems to only be concerned about enjoying her work.[1]

Whether or not this matches the attitude of ancient Releasers is currently unknown, although the Diagram indicates that Dustbringers are the most likely Order of Knights Radiant to accept the Diagram's cause.[5] 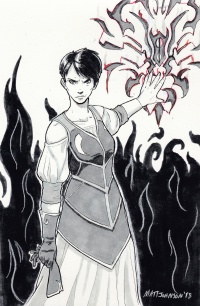 As a Releaser, Malata has access to the Surges of Division and Abrasion, although so far she has only demonstrated Division, the Surge of decay. Using Division, she can cause objects to degrade, burn, or turn to dust just by touching them with her bare hand. She has shown enough skill in this that she could quickly make an intricate engraving on wood via controlled burning.[1]

She has also progressed enough in her Oaths to turn Spark into a Shardblade[2], which she has been using to control Oathgates.

At some point after creating the Diagram, King Taravangian of Kharbranth formed and managed a project to have some Diagram members attempt to bond a spren.[1] Malata was supposedly part of this project, although she claims to have approached Taravangian only because of a suggestion by Spark, implying that she was already bonded prior to joining Taravangian's team.[4]

She was part of Taravangian's contingent in Dalinar Kholin's coalition. With some guidance from Navani Kholin, Malata was able to use Spark to unlock and activate the Veden Oathgate, transporting herself and the rest of the contingent to Urithiru, the base of operations for the coalition.[2]

Having access to a Radiant Shardblade, Malata was often given the responsibility of opening Oathgates for members of the coalition. Malata accepted this role obediently, although she once expressed distrust against the Alethi and was apparently skeptical of the claims regarding the Desolation.[4]

The Diagram later decided that Taravangian must replace Dalinar as leader of the coalition, and had Malata spy on the Blackthorn using Spark.[5] Through this, they learned about Dalinar's visions where he talked to Odium. They used the information about these visions, along with other secrets they discovered, to undermine the coalition's trust in Dalinar.[6]

Later on, while the Battle of Thaylen Field was taking place, Malata opened Kholinar's Oathgate upon orders from the Diagram to allow a strike force of Odium's singer army into Urithiru, where they battled with Alethi soldiers. An agent of the Diagram disguised as a Bridge Four member was also able to enter Urithiru and steal Jezrien's Honorblade from Eth, killing him and injuring Rock and Bisig in the process. All this was part of Taravangian's plan to appeal to Odium so that he would agree to sparing part of humanity on Roshar.[7][8][9]

This article is still missing information. Please help The Coppermind by expanding it.
Retrieved from "https://coppermind.net/wiki/Malata?&oldid=153125"
Categories: