“Honor gave these to men, and those men gained powers from them. Spren figured out what He'd done, and we imitated it. ”

The Honorblades are the magical swords carried by the Heralds to fight the Voidbringers during the Desolations. They were pieces of Honor's soul that gave their wielders access to his essence.[2] 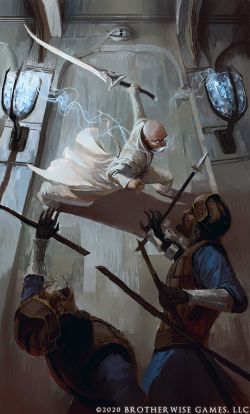 “With this sword, someone can do what you can, but without the . . . checks a spren requires. ”

There are ten Honorblades total, one for each Herald. Every Honorblade is unique, covered in various glyphs and patterns.[3] They are technically a type of Shardblade; they were prototypes of the Knight Radiant Shardblades, and share many qualities with them.[4] Among others, they can be bonded, summoned and dismissed much like a Shardblade can.[5] Like living Shardblades, they can be used to operate Oathgates.[6] Though, unlike living Shardblades, they cannot change shape.[7] Summoning a Blade has required ten heartbeats for some wielders, similar to a dead Blade, and has been instantaneous for others; this may be tied to their wielders' perception.[7][8][9] They are near-indestructible, with the only thing known to be capable of damaging them being Nightblood.[9] Honorblades are made out of the God Metal of Honor.[10]

Unlike Shardblades, however, Honorblades are not spren, and are not, nor have ever been, sapient. Rather, they are made of Honor's own Investiture, which he deliberately splintered off himself and crystallized into metallic form.[6][10]

One does not need to be a Herald in order to use an Honorblade.[11] Likewise, a Herald dying does not cause the Honorblade to be destroyed or vanish.[12] However, the Honorblades do go with the Heralds when they travel to Braize, and they appear to have a crucial role in the Oathpact, as nine of the Heralds leave them behind in the Aharietiam.[3]

Holding an Honorblade inherently grants the ability to Surgebind without a Nahel bond.[13][14] This ability is similar to that of unsealed metalminds, though they rely on different magic systems.[15]

Honorblade Surgebinding is in many ways inferior to Radiant Surgebinding; among others, the Surgebinding healing bestowed by Honorblades is less efficient than Radiant healing.[5] Additionally, Surges require more Stormlight as fuel to power them, up to dangerous levels.[16][17] While the latter still applies to the Heralds, they were once powered directly by Honor, which made the issue of Stormlight consumption irrelevant.[2]

If a Surgebinder uses an Honorblade that matches the power they already have, their powers will be slightly enhanced.[18] 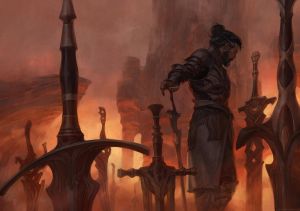 by Micah Epstein
The Heralds leaving their Blades behind at Aharietiam

“Our Blades must be left. The Oathpact ends now. ”

It's unknown at what point the Heralds received their Honorblades, although it likely happened during the creation of the Oathpact. They used them throughout the Desolations until the Aharietiam, whereupon nine of them left them at the site of the final battle before walking away from the Oathpact. Talenel's Honorblade disappeared along with him.[3]

After the Heralds departed, one of the Shin soldiers who participated in the battle stumbled upon them. Likely because of this, the nine Honorblades ended up in Shinovar.[19][20] Over the millennia, they retained the Blades, and even occassinally used them, most notably during the Shin invasions.[21] Even after the invasions failed, they would still train some of their people in the use of the Blades and the associated Surges.[16]

At some point, the Herald Nale reclaimed his own Blade from the Shin, leaving them with eight.[20]

A few years before the War of Reckoning broke out, Szeth's family was given to the Honorblades. Szeth became the bearer of Jezrien's; his father Neturo-son-Vallano became the bearer of Ishar's.[22] Upon becoming the Truthless, Szeth kept his blade.[5][23][22] The Blade would go on to cut a swath through the Rosharan leadership as Szeth became the infamous Assassin in White. Among others, Gavilar Kholin, Hanavanar of Jah Keved and two Prime Aqasixes of Azir fell to Jezrien's Honorblade.[5][24][25]

At roughly the same time, the Herald Talenel returned from Braize, carrying his own Honorblade. He dropped it upon entering Kholinar, but for unknown reasons, it didn't vanish.[26] Talenel was later collected by one of Dalinar Kholin's soldiers, Bordin, to be brought to the Shattered Plains. The Blade was taken along with them; however, at some point during the transit, it was swapped out for a regular Shardblade.[27] It's unknown at this point who performed the swap and where the real Honorblade is currently located.

During the Battle of Narak, Szeth used Jezrien's Honorblade to battle Kaladin above the Plains. At the end of the fight, Szeth unbonded it and it ended up in Kaladin's hands.[1]

Kaladin later passed the Honorblade to Dalinar, who hid it in one of the vents in Urithiru.[6] After a while, he gave it to Bridge Four, to use for training and Oathgate operation in absence of their leader.[28] The bridgemen would swap the Blade among themselves every once in a while in order to hide who currently had it and remain unpredictable.[29]

Despite that, agents of the Diagram managed to figure out the time when Eth held the Honorblade and attacked him. They snuck up to him with Teft's sold-off uniform coat, then killed him with a Shardblade and stole the Honorblade before running off.[30] Taravangian later gave the Blade to Odium at the latter's demands. The Blade was later given to Leshwi, who passed it onto Moash to allow him to join the Fused in the skies.[12]

At some point very recently, Ishar killed Neturo-son-Vallano and took back his Blade.[31][9]

This article is still missing information. Please help The Coppermind by expanding it.
Retrieved from "https://coppermind.net/wiki/Honorblade?&oldid=164460"
Categories: