Pailiah, nicknamed Pali, is one of the ten Heralds of the Almighty on Roshar. She is the patron of the Order of Truthwatchers.[1] 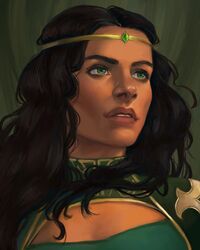 The cultural references to Pailiah imply that she might've been a scholar prior to becoming a Herald. As a Herald, she's an immortal Cognitive Shadow, and every time she dies, she travels to Braize. There, she's tortured until she or one of the other Heralds breaks, returning them to Roshar.[2]

When Pailiah wielded her Honorblade, she had use of the Surges of Illumination, allowing her to create illusions of light and sound, and Progression, letting her grow plants and heal herself and others. She also had the ability to breathe in Stormlight, compounding her self-healing power. However, she has abandoned her Blade at the Aharietiam, losing her access to Stormlight and Surgebinding.[3] Whether she has Surgebinding abilities in the present day is uncertain. 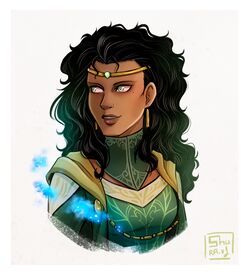 Like most other Heralds, Pailiah was born on Ashyn and made the trip to Roshar when the former was destroyed by a man-made catastrophe.[4] She was likely a scholar of some sort—at the very least, she was an important figure in early Rosharan society. When the Desolations began, she was one of the ten people made Heralds by Honor and given a Honorblade.[2]

Along with all of the Heralds but Taln, Pailiah abandoned the Oathpact at the end of Aharietiam.[3] At some point, she may have joined the Ardentia and in particular, the Devotary of Insight, who act as caretakers for the Palanaeum in Kharbranth.[5][6] It is unclear if she was involved with Taravangian during this time,[7][8] and Pailiah may have briefly crossed paths with Shallan while the young scholar was studying under Jasnah.[6][fn 1][disputed]

In the Vorin culture, Pailiah is associated with number 5 (Palah), the essence Pulp, and the attributes of Learned and Giving.[9] The grand library in Kharbranth, Palanaeum, is named after her.[10]

Pailiah features in several Rosharan idioms, such as "Pali's mind" and "Pailiah knew...", referencing her nature as Learned.[11][12] There are temples to her in major cities on Roshar, like Kholinar and Thaylen.[13][14]

This page is probably complete!
This page contains most of the knowledge we have on the subject at this time.
It has yet to be reviewed.
Retrieved from "https://coppermind.net/wiki/Pailiah?&oldid=163928"
Categories: