Battar is one of the ten Heralds of the Almighty on Roshar. She is the patron of the Order of Elsecallers. She may currently reside in Kharbranth as an ardent under the assumed name of Dova.[2][3][4] 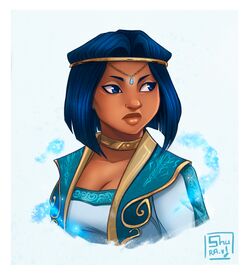 Battar is an immortal Cognitive Shadow who gains a physical body upon each return to Roshar. After death, she is transported to Braize to be tortured; when she or another Herald breaks, a new Desolation begins.[5]

During the Heraldic Epochs, she wielded an Honorblade. It granted her access to the Surges of Transformation, which enables her to Soulcast, and Transportation, which allows for travel to and from Shadesmar.[6] She has, however, abandoned it at Aharietiam.[7]

She seems to be fairly knowledgeable, being ascribed the attribute of Wise, and noticing signs of an upcoming Desolation years before the Battle of Narak.[8][3] 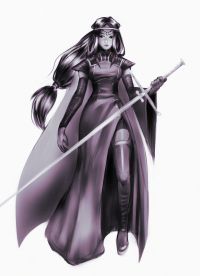 Battar was born on Ashyn and escaped to Roshar when her homeworld was destroyed in a Surge-induced catastrophe.[9] She was a figure of some importance during that time, and when the Fused began to appear, she was made a Herald by Honor. Thence she participated in every Desolation, and between Desolations, she would travel to Braize, when she'd be captured and tortured by the Voidbringers to get at least one Herald to break and start a new Desolation.[5]

Eventually, she and the other Heralds grew exhausted with this endless cycle of war and torture. When Ishar suggested that one person might be enough to hold the Oathpact, she and the others abandoned Taln to his fate, leaving their Honorblades behind. From then on out, they hid among the human populace.[7] Most of her actions in the intervening four and a half millennia are unknown.

As Dova, she supposedly approached Taravangian and warned him of a coming Desolation, which prompted him to seek out Szeth after King Gavilar's assassination.[3] She has since been assisting the Diagram. Sometime prior to Taravangian seizing of the throne of Jah Keved, she reported that the frequency of Death Rattles had been declining further, hinting at Moelach's movement.[2] She was later assigned with writing an anonymous essay revealing Dalinar and Elhokar's decision to make the former a highking, to undermine Dalinar's authority along with the revelations of the translated Eila Stele.[10] With the fulfillment of the Diagram Taravangian instructed his followers to no longer trust Battar as he feared for her mental state after seeing the other Heralds.[4]

“Battah send that girl some sense to go with her intelligence. ”

Battar has been worshipped since the Silver Kingdoms Epoch, with people swearing by her name even in-between the Desolations.[1] In the modern Vorin tradition, she's known as Battah'Elin, and is associated with the number seven (Betab), the Essence of Tallow, the gemstone Zircon, and the attributes Wise and Careful.[8]

There is a temple to her in several major Vorin cities.[12][13] The temple of Battah in Thaylen City is particularly notable -- it is the oldest in the city, and a must-see location for every arriving dignitary.[14]

This article is still missing information. Please help The Coppermind by expanding it.
This article was complete and reviewed prior to Rhythm of War, but now needs to be updated.
Retrieved from "https://coppermind.net/wiki/Battar?&oldid=166840"
Categories: