Vedel, also known as Vedeledev in Vorinism, is one of the ten Heralds of the Almighty on Roshar, and the patron Herald of the Order of Edgedancers.[1] Like the other Heralds, Vedel protected mankind during the Cycle of Desolations before abandoning them at Aharietiam.[2] 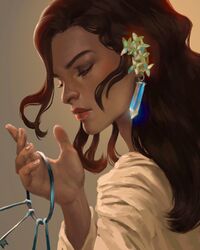 Vedel would appear as Alethi to modern Rosharans.[3] She was born on Ashyn and made the trip to Roshar during the Expulsion.[4] She was someone important in the pre-Desolations society -- a queen, scholar, or general. Along with the others, she approached Honor and formed the Oathpact. Whenever a Desolation ended, she'd travel along with them to Braize, when she suffered torture until one of them broke. She broke at least once, starting a new Desolation.[5]

While on Roshar, she would train surgeons in anticipation of the incoming Desolation.[6] Once the Knights Radiant formed, she admitted patronage of the Order of Edgedancers. At the time of the Last Desolation, Vedel decided with the other Heralds to give up the Oathpact and leave Taln alone on Braize.[5] It is not known where she went or what she's been doing during the Era of Solitude. 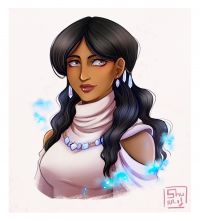 by Shuravf
For more information about Heralds' powers, see Herald#Abilities.

Vedel is a Herald, making her a Cognitive Shadow and thus immortal. When she dies, she returns to Braize to be tortured.[7][5] Until Aharietiam, she wielded a Honorblade, which gave her access to the Surges of Abrasion and Progression, and she was a capable swordswoman.

She might've been a doctor before she became a Herald, as she has vast medical knowledge, and trained new surgeons before a Desolation.[8] It's likely that a lot of the Heralds' teachings regarding medicine -- such as the mandate to always wash hands before an operation -- came from her.[9]

Like all the Heralds, Vedel's name has become part of culture. In Vorinism, she is called Vedeledev, and swearing by Vedeledev's golden keys is used to express astonishment.[10] "Vedeledev knows" is also used.[11] The name is sometimes shortened to Vev -- this is used both as an expression of its own, and as the Vorin number 4.[12] Names Vedelliar and Vevidar are probably derived from Vedel.

Within the context of the Ten Essences, Vedel is traditionally associated with the Loving and Healing Divine Attributes, the gemstone diamond, and the Essence of lucentia.[13]

The golden keys that people swear by and that are present in some artwork of her[14] are derived from a Rosharan myth; though they have really existed, they are more symbolic than actually imbued with any power.[15] What the myth is about is undetermined.

This page is probably complete!
This page contains most of the knowledge we have on the subject at this time.
It has yet to be reviewed.
Retrieved from "https://coppermind.net/wiki/Vedel?&oldid=162690"
Categories: