by Isaac Stewart
Company logo by

Dragonsteel Entertainment LLC is a company founded and operated by Brandon Sanderson.

Dragonsteel owns the copyright on many of Brandon's books and it has self-published some of Brandon's stories in both electronic and print formats. It also operates Brandon's merchandise store, which rebranded as Dragonsteel Books in 2021.[1] It also produces the Writing Excuses and Intentionally Blank podcasts. 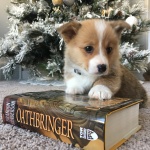 The company, which is sometimes referred to as "Team Sanderson", started small and gradually grew as Brandon found increasing success with his books. As of 2022, Dragonsteel employs around 53 people and it has a physical warehouse in Pleasant Grove, Utah.[2][3]

Some of the employees include:

In 2019, Brandon got the idea to fund the 10th anniversary leatherbound edition of The Way of Kings through the crowdfunding website Kickstarter after talking to a cartoonist friend, Howard Tayler. He decided Kickstarter was a good fit due to the site's flexible management tools that would allow him to sell a variety of bundles including both digital and physical bonus items.[8] It also allowed Dragonsteel to have control over the the leatherbound itself, from the paper and binding to the font, illustrations and layout.[9] Brandon also decided to include both Dawnshard and The Way of Kings Prime in the backer rewards and the team developed a variety of exclusive merchandise.[10]

When the campaign went live in July 2020, it surpassed its goal of $250,000 within minutes. After one month, it finished with nearly 30,000 backers and $6.8 million in funding, making it the most-funded publishing Kickstarter of all time.[11] The team was blown away by the response and quickly got to work on the book and other rewards.[9] Although the COVID-19 pandemic presented some logistical problems that delayed production and shipment of some items,[12] all of the backer rewards were fulfilled by September 2021.[10]

This page or section contains spoilers for Tress of the Emerald Sea!
This information has the ability to potentially ruin elements of the plot for the reader. Proceed with caution if you have not read this book.

On February 28, 2022, Brandon posted a seemingly somber video on YouTube alluding to potential changes in his career that he needed to talk about. After a day of rampant speculation by fans, he posted a follow-up video wherein he revealed that he was actually announcing good news. He explained that the limitations on travel caused by the COVID-19 pandemic had caused him to cancel his book tours starting in 2020. Although he was disappointed that he couldn't see the world and interact with fans, the side effect was that he suddenly had much more time on his hands, and he used this time to write. Initially, he wrote one novel in secret as a gift for his wife. As the pandemic continued, he realized that these secret novels were a great creative outlet for him since they fell outside of his "core" series. He went on to write four more secret novels while simultaneously working on his previously announced books, not even revealing them to the Dragonsteel staff. One of the books is a middle-grade story inspired by his kids called Super Awesome Danger that may become a graphic novel.[13] Of the four adult novels, three are set in new worlds of the cosmere and the remaining novel is non-cosmere. The books themselves are not interconnected (other than three of them taking place in the cosmere).[14]

At the same time that the announcement video was posted, a new Kickstarter campaign for the four secret novels went live.[15] The campaign is intended to make 2023 a "Year of Sanderson", with the top backer tier including monthly rewards: one of the secret novels each quarter (in e-book, audiobook, and hardcover formats) plus eight boxes of themed merchandise in the other months of 2023. The campaign's goal was set at one million dollars, and it surpassed that amount in 35 minutes. Within 24 hours, it had raised $15.4 million, the single most successful day of any Kickstarter campaign.[3] After three days, the campaign broke the previous Kickstarter funding record of $20.3 million held by the Pebble Time smartwatch.[16] The project ended on March 31, 2022, with 185,000 backers and $41.7 million in funding, attracting widespread media attention due to its sheer size and groundbreaking nature within the publishing industry.

Brandon released the titles and performed readings from all four novels on his YouTube channel during the Kickstarter campaign. However, to maintain a level of secrecy for those who did not want spoilers, he continued referring to them as Secret Project One (for Tress of the Emerald Sea), Two, Three, and Four whenever he could.

This meta article is still missing information. Please help The Coppermind by expanding it.
Retrieved from "https://coppermind.net/wiki/?title=Dragonsteel_Entertainment&oldid=173469"
Categories: