“A woman sits and scratches out her own eyes. Daughter of kings and winds, the vandal. ”

Shalash, also known as Ash, is one of the ten Heralds of The Almighty on Roshar.[3] She's commonly titled the Herald of Beauty;[4] she's the patron of the Order of Lightweavers and the daughter of another Herald, Jezrien.[5] Prior to the True Desolation, she was traveling the world destroying any depiction of herself she could find.[6] Currently, she resides with the Knights Radiant in Urithiru.[7] 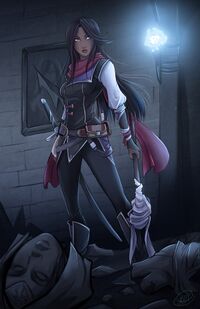 Shalash has dark skin and long black hair. Her eyes are a faint violet, so faint as to be almost white, and lack epicanthic folds. She is also described as being tall and lean as well as exceptionally beautiful.[9] In recent years, she tends to wear practical clothing over anything particularly feminine. She carries around a thin-bladed sword, though it's not a Shardblade.[9]

She dislikes thievery, though she has no issues with breaking into the dwellings of the rich to destroy art, even if she doesn't want the destruction to be too easy. This appears to be a perversion of her divine attribute of Creative, and may be a symptom of her forsaking of the Oathpact.[9] It's focused on depictions of herself - whenever she sees her own face, whether as a painting, statue or tapestry, she is compelled to destroy it. She seems unable to resist the urge even when pressed for time. She is, however, aware of this, and when doing something important, she actively avoids looking anywhere one may find artwork of the Heralds.[6]

Shalash is very private and does not appreciate being asked prying questions.[9] She seems to be highly regretful of abandoning the Oathpact. Upon meeting Taln again, she's extremely apologetic for leaving him behind, and expresses dismay that he doesn't hate her for it.[8] Despite that, she no longer cares about the fate of Roshar and its people.[6] She also seems to have periods of losing touch with reality, as she mentions missing decades, if not centuries of memories.[8]

Shalash is a Cognitive Shadow capable of returning to life, though the exact mechanics of how are unclear. Following every death, she travels to Braize; whenever she or another Herald gives in, she returns to life on Roshar.[10] While alive, she's ageless, and will likely live forever unless killed.[6] She also appears to have no need of sleep; at the very least, it seems she cannot easily lose consciousness.[7]

As part of the Oathpact, she was given one of the Honorblades, granting her access to Surgebinding. Her Blade allowed her to use the Surges of Illumination, or creating illusions, and Transformation, or Soulcasting. However, she has left her Blade behind at the Aharietiam, and hasn't recovered it since.[11][9]

Considering her well-known attributes, it's likely Shalash was once an artist of some sort, or at least artistically inclined.[12] Her hearing is noted as exceptionally good.[9] She's also fairly capable of spying and infiltration, as she has no problems mixing herself into a new city or finding her way into a military camp.[13][6] Though her obsession with depictions of herself is compulsive, she is very covert about it, breaking into houses and leaving without any trace of her presence other than missing or destroyed art.[9][14]

Unlike with the other Heralds, it's uncertain whether Shalash was born on Ashyn or after its people travelled to Roshar, though the former is more likely.[15] When the Desolations started, she was chosen by Honor to be one of his Heralds. This formed the Oathpact, which included Shalash receiving one of the Honorblades to aid her in her duties.[10] The precise circumstances of how this came to be are unknown, but there are stories about Proving Day, during which the would-be Heralds faced difficult, if not impossible, tasks to prove themselves.[16]

Following the formation of the Oathpact, Shalash and the other Heralds spent several thousand years helping the people of Roshar fight the Voidbringers in subsequent Desolations. Preceding each Desolation, the Heralds would return to Roshar and have a short time to prepare them for said Desolation, teaching them any necessary technology they may have lost in the intervening time. The level of technology the Heralds returned to varied with each Desolation, in some cases the Rosharans had not progressed past the Stone Age.[17][18] At the end of each Desolation, if Shalash did not "die", she, along with any other surviving Heralds, was required to leave Roshar and return to Braize. There, she and the others would be tortured to get them to give in and return, whereupon a new Desolation would begin.[10]

At Aharietiam, Shalash and all Heralds other than Taln -- who was dead at the time -- decided to forsake the Oathpact and abandon their Honorblades. They lied to the people of Roshar, telling them they had "won" and went their separate ways.[11] They were, however, not as successful in their breaking as they'd thought.[19] 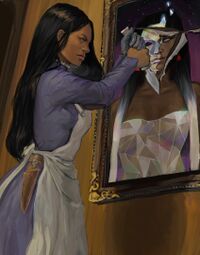 by Esther Schrader
Shalash destroying a painting of herself

Roughly four and a half thousand years after Aharietiam, Shalash was traveling the world destroying any depictions of herself. Sometime prior to the assassination of King Gavilar Kholin of Alethkar she infiltrated the royal palace in Kholinar and destroyed her own statue.[21] This pattern of behavior seemed to have gotten much worse at the time, as her fellow Heralds noted that she was getting worse.[20]

Five years later, in 1173, Shalash, alongside with hired help Baxil and Av, infiltrated the palace of Ashno of Sages, the Prime of Emul, and destroyed a great deal of artwork depicting herself, including a canvas painting and a statue.[9] Either during or prior to that time, she also infiltrated the Bronze Palace in Azimir, where she defaced the mural of the Heralds, scratching out her own face, along with destroying many of the statues in her temple in Thaylenah.[14][22]

Following the Jah Keved civil war, at the start of the True Desolation, Ash became a washerwoman under the assumed name Pom to track down a painting of herself by Dandos Oilsworn. This turned out to be a trap set up by Mraize, who wished to tell her where Taln was.[13] This set her on the path to Thaylen City, where she arrived just in time for the Battle of Thaylen Field. There, she found Taln.[6]

During the battle, Taln was next to catatonic, requiring Ash to pull him along until Dalinar managed to open Honor's Perpendicularity, whereupon the two Heralds managed to have a short conversation.[8] After the battle, with Taln once more uncommunicative, Ash decided to take him to Ishar. This was, however, not to be, as at the same time, Vyre managed to kill Jezrien, sending her into deep shock. The resulting commotion made Jasnah, watching the line to the Oathgates, notice them and come to confront them, but Shalash fell unconscious before the two could talk.[7]

After being discovered at the Battle of Thaylen Field, Ash and Taln moved to Urithiru, where they were often interviewed by Jasnah. Ash provided some information about Bondsmiths and the Oathpact to Dalinar, but claimed that Ishar was the real expert on the subject.[23] The two Heralds were brought along to the offensive in Emul, and Ash was eventually again questioned by Dalinar about Ishar.[24] 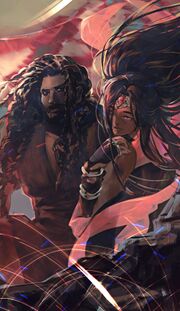 Shalash is the daughter of Jezrien, a fellow Herald. It doesn't seem as though the two are very close; the only time she's seen thinking about him is when she feels the pain of his death.[7] Other Heralds -- Nale and possibly Kalak -- appear to have been keeping tabs on her activities, though it's unknown whether they've met with her directly in recent years.[20]

She and Taln were likely romantically involved, or at least very close; she finds herself drawn to his hands, and remembers the sensation of them even after four thousand years. He's also the only person to whom she's apologetic about abandoning the Oathpact, and she nearly breaks down when he refuses to hate her for it.[8]

She has met Hoid, and knows him well enough to be able to recognize his art style, though she refers to him as Midius.[7]

In Vorinism, Shalash is known as Shalash'Elin, the Herald of Beauty, though the nickname Ash is also used.[4] Tradition associates her with the number 6 (shash), the Essence of Blood, and the divine attributes of Creative and Honest.[12] Like all other Heralds, she has temples to herself in all major cities.[22][26] There are numerous pieces of artwork devoted to her, and depictions of her can be found decorating even utilitarian items like braziers.[6]

"Ash's eyes" is an extremely common phrase, often used to express shock or surprise.[27][10] "Shalashian temperament" is an idiom with uncertain meaning, though it may refer to being honest or impulsive.[28] The name Shallan is derived from Shalash.[27]

Further west, in Emul and, likely, other Makabaki countries, Shalash is known as Epan and titled the Lady of Dreams.[9] In Shinovar, she is called Shush-daughter-God.[1]

This article is still missing information. Please help The Coppermind by expanding it.
Retrieved from "https://coppermind.net/wiki/Shalash?&oldid=164220"
Categories: