This page or section needs to be updated with new information for Rhythm of War!
Be aware that in its current state, it may not include all additional content yet.
"Vyre" redirects here. For the previous holder of that title, see El.

“He couldn't be blamed. He was a product of his culture. ”

Moash, also known as Vyre, is an Alethi man on Roshar. Originally a bridgeman in Bridge Four,[2] he becomes a soldier and bodyguard under Kaladin; eventually, he betrays Bridge Four and switches sides to the Diagram, then the Fused, serving them as a slave and warrior. He's the current holder of Jezrien's Honorblade. 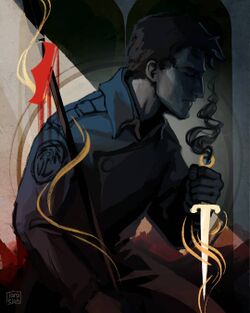 Moash is lean, though strong, with a narrow face and brown hair speckled with black.[3][2][4] He's born darkeyes, with brown eyes which turn tan after he receives a full set of Shards.[5]

Moash is vindictive and largely opposed to any sort of order, though once he does warm up to someone, he gets attached extremely quickly.[2][3] Once he joins a group, he's friendly and amicable, and often the driving force behind their more relaxing, off-duty activities.[6] He values his friendships, and tries to salvage them when he can.[7][8] He's eager to gain power, and very starry-eyed over those who do have it.[9] At the same time, he's highly suspicious of those above him in the social order.[10] He has a strong sense of justice, though it only comes forth on some occasions.[1]

On the other hand, Moash has very little sense of responsibility; to him, nothing is ever his fault, and his decisions, to his eyes, are always motivated by some external factor, whether it be actions of other people or the society at large.[1] He does have some moments of insight when he acknowledges that what he did was wrong; however, those become more and more rare as he becomes involved in the Fused army.[11][12]

His need to get revenge, first on Elhokar, then on all lighteyes, consumes him and pushes him further and further away from friends and into the waiting arms of the Voidbringers, even as he claims to still be following his ideals.[13] Eventually, as he gives in completely, he seems to lose any drive altogether, feeling no emotions even as he accomplishes his vengeance. At this point, he's a full devotee of the Fused and Odium's philosophy, seeking out passion and obeying their orders.[14][15] Although he continues to care for Kaladin, he thinks that suicide is the only way, short of joining Odium, that Kaladin can be happy, and also cares more about proving that he is right and Kaladin is wrong, instead of caring about his past friendships.[16]

Moash is a skilled spearman, enough so to kill an attacking Fused. For a time, he also has a set of Shardblade and Shardplate, and though he does have some training with them, he's not particularly good with them and still defaults to the spear when his life is on the line.[17] Eventually, he's given Jezrien's Honorblade, granting him control over the Surges of Gravitation and Adhesion. He appears to be natural at using it, as it takes him no time at all to drink in Stormlight and use Lashings.[15]

He's also a decent spear teacher and commander, able to train a group of singers before the attack on Kholinar.[12]

Both of Moash's parents died when he was a child. He was raised by his grandparents Ana and Da, who both worked as silversmiths in Kholinar.[18] It was his grandfather who named him. Later, Moash would discover that he has the same name as an ancient singer of some renown,[19] although it is unknown whether his grandfather was aware of this.[19]

Moash chose not to enter the family business, preferring jobs that involved traveling. While he was working on a caravan for a few months, his grandparents became victims in the Roshone Affair that led to them dying while incarcerated in the palace dungeons. Moash ultimately blamed Elhokar Kholin, who was then a royal prince but would later become the king of Alethkar, for their deaths.[18]

Moash joined the war assuming he would be made a spearman but ended up in Bridge Four.[20] When Bridge Four started training down in the chasms, Moash was one of the first who changed into a fighting man.[21] Later, on the bridgerun where Dunny died, Moash probably saved Kaladin's life by keeping him from reaching Dunny's body and later told Kaladin that he was wrong about him.[22] 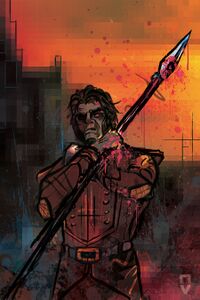 When Adolin tried to give Kaladin the gift of Shardblade and Shardplate, Kaladin instead gave them to Moash, thereby making him a lighteyes in rank.[23] His eyes started to lighten a week after,[5] though he still did not consider himself lighteyes.

Kaladin: "Sometimes lives must be spent for the greater good."
Moash: "Exactly!"
Kaladin: "That's what Amaram said. In regards to my men, whom he killed to cover up his theft."

―Conversation between Kaladin and Moash on the topic of assassinating Elhokar

Moash became involved in a plot with Graves to assassinate King Elhokar Kholin, which was ultimately thwarted by Kaladin. Moash took his Plate and Blade and fled the warcamps with Graves after their failed attempt.[11]

They head out into the wilderness with a caravan of stolen goods. Graves intended to introduce Moash to the Diagram, hoping that bringing back a full Shardbearer could compensate for his plan's failure. A short while into the trip, they were attacked by a group of Fused. Graves was killed, and Moash attempted to fight with his Shardblade, but deemed it too unwieldy. He got hold of a spear and was able to kill one of the Fused.

Upon seeing this, the other Fused considered Moash to have enough "passion" to earn their respect, and gave him the choice between death and slavery. He chose slavery, gave up his Shards and his other weapons, and went with them.[17]

As a slave, he pulled supply sledges across the country. On one of his routes, he saw a group of singers pulling sledges like the other slaves. He stood up for the group, gaining more respect among the Fused and the singers.[1] Eventually, he joined the assault on Kholinar as a warrior for the Fused's army.

In Kholinar, he and his singer companions fought with Kholinar's Wall Guard. At the climax of the fight, Moash found his way to King Elhokar, and stabbed him through the chest. He then stabbed the king again in the eye, just before Elhokar could finish swearing the First Ideal. His vengeance fulfilled, he looked up to see Kaladin, who was in Kholinar with the king on a mission to save the city. Moash saluted his former captain, who had frozen in shock at what happened, and left.[13] 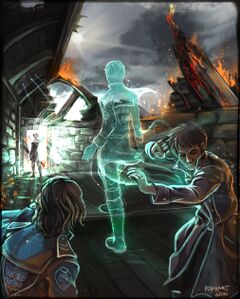 by rspixart
Being confronted by Renarin

Following the siege, he was put to work as a laborer clearing out the debris. There he was approached by a Fused, Hnanan, who gave him a bright golden knife with a sapphire attached to it. The Fused then sent him to assassinate the Herald Jezrien, whom he killed with the knife.[14] Some time after the successful assassination, the Fused, Leshwi, offered Moash Jezrien's Honorblade as well as a new identity. He accepted, took the singer name Vyre, which meant He Who Quiets, and used the Honorblade to join the Fused in the air.[15]

A year later, Moash took part in the Fused assault on Hearthstone, where he murdered Roshone in front of Kaladin, who went into a state of battle shock. Moash then attempted to persuade Kaladin to commit suicide. He was stopped by Renarin, who showed Moash a vision of the man he could have been had he not betrayed Bridge Four, a Windrunner of the Third Ideal, causing Moash to flee.[24]

In Kholinar, he sat in on a session of the Nine, where he warns them that Kaladin will foil their plan to occupy Urithiru.[25] Later, he was approached by Odium, who intended to break Kaladin and questioned Moash on the best ways of tormenting his former captain.[26]

During the occupation of Urithiru, Vyre used his Honorblade to operate the Oathgate between Kholinar and the tower for the Fused.[27] When the uprising to take Urithiru back began, he set a trap for Kaladin in his family's clinic, but the trap was instead sprung by Teft and Lift. Moash injured Lift, then used a raysium dagger containing anti-Stormlight to permanently kill Teft's spren, Phendorana, before killing Teft.[28][29] He handed Lirin to the Fused as insurance against Kaladin, ordering them to kill Lirin in front of his son should Kaladin fight back.[30]

Moash then descended to the basement of Urithiru to kill Queen Navani. Nearly succeeding, he was ambushed by an injured Raboniel, which gave Navani time to bond the Sibling. After restoring the tower, she used its Light to incapacitate Moash and forcibly return his pain to him.[31] Moash fled, hating himself for what he had done to Teft and realizing that he did not truly regret the murder, only the guilt. He eventually broke his spine in a fall and nearly died before being rescued by a few Heavenly Ones and given Stormlight. When he recovered, he found that he was blind.[32]

This article is still missing information. Please help The Coppermind by expanding it.
Retrieved from "https://coppermind.net/wiki/Moash?&oldid=166677"
Categories: