The Assassination of Gavilar was an assassination performed by Szeth-son-son-Vallano on orders from the Parshendi[2]. It was a major turning point in Alethkar's history, leading to the War of Reckoning and most of the events in the Stormlight Archive.[3]

Gavilar encountered the Parshendi on an expedition south of Alethkar, while exploring the Eastern Crownlands[4]. Gavilar showed an unusual amount of interest in the Parshendi[5], attempting to discover more and more about them. Eventually, in 1167, he even made a treaty with the Parshendi.

In addition, a number of changes were noted in Gavilar - he started following the Alethi Codes of War, and he developed a fascination for The Way of Kings.

The scene begins with Szeth, a Truthless Shin assassin, waiting quietly in a large room, watching the Alethi celebrate the signing of a peace treaty with the Parshendi. He leaves the room, noting that his Parshendi masters will soon withdraw. Szeth wears white under the orders of the Parshendi to follow their traditions so that King Gavilar could see him coming.

Szeth fights his way past the Shardbearer, but soon realizes that the Shardbearer, not the man he is chasing, is King Gavilar. He returns and fights him, eventually defeating him by causing the balcony he is standing on to collapse and kill Gavilar. Szeth is nearly killed in the fight. As Gavilar dies, he asks Szeth who sent him, suspecting the Ghostbloods or one of his highprinces. When Szeth tells Gavilar the Parshendi sent him, Gavilar is confused and says, "The Parshendi? That makes no sense."

Gavilar then gives Szeth a strange black sphere and tells him, "You must take this. They must not get it." The sphere glows with a black light that Szeth has not seen before. Gavilar also instructs Szeth to tell Gavilar's brother Dalinar that he must "find the most important words a man can say. As a Shin, Szeth considers a dying wish to be sacred, and he leaves a note for Dalinar written in Gavilar's blood. He takes the sphere and flees.[2] Szeth later hides the sphere in Jah Keved[6], and retrieves it years later upon Navani's request.[7]

Jasnah leaves the feast celebrating the signing of the Alethi treaty with the Parshendi. On her way to a clandestine meeting that she had scheduled, she notices her shadow pointing the wrong way. Her shadow slowly returns to normal, but she is disconcerted. This isn't the first time her this has happened, and she wonders if she is cursed. As she continues, she observes a group of oily black figures materialize before her. Jasnah then transfers to Shadesmar for the first time. She almost drowns in the sea of beads before figuring out how to form the beads into the shape of one of the palace hallways. One of the figures approaches her drawing a sword and Jasnah manifests a statue of Talenel to protect herself. The figure bows to her while his companions whisper to each other, and Jasnah is transferred back to the Physical Realm. She notices that the lanterns near her have been drained of Stormlight.

She hurries on to the meeting, where she tells the assassin Liss that she only wants her brother's wife, Aesudan, watched for now. Jasnah reminds Liss of their first agreement, according to which Jasnah will match payment of any offer made against a member of her family, in exchange for the name of whoever tried to have them assassinated.

As she leaves Jasnah hears the Parshendi's drums cease. As she walks she encounters Nale and Kelek discussing an individual named Ash as well what Jasnah believes is a shardblade. Continuing on, Jasnah hears screams and starts running, following a trail of destruction that leads to her father's rooms. She watches as Szeth collapses the balcony beneath himself and Gavilar. She begins to cry as he stands over her father and wonders what he is doing. When he walks away she sees that her father is dead, his blade having appeared next to him, and despairs over failing in her efforts to protect her family.

Members of the Parshendi ruling council, including Klade, Gangnah, and Varnali, approach Jasnah and apologize. They confess to hiring Szeth to assassinate Gavilar, claiming he was about to do something very dangerous.[8]

At some point on the same night, Gavilar told Taravangian about his visions and the need to unite the world.[9]

Eshonai arrives at the docks of Kholinar and marvels at its beauty and size. She talks to Gitgeth about the Parshman slaves, whom he calls "rhythmless ones." They are only capable of trying to help and cannot even comprehend the invitation to join the celebration. Eshonai wanders off toward the palace and begins exploring. She peeks into a doorway and sees King Gavilar. Amaram comes out and says that the king would like to speak to her. Gavilar dismisses the others in the room and he invites her to sit down. He shows her a fabrial and explains that they work by trapping spren in a gemheart. She is awed that the humans have made devices that mimic how they apply the forms. He believes that the world is stuck in a rut and needs a major conflict to progress. Eshonai is horrified that Gavilar wants to bring back the gods that their people abandoned long ago. He then gives her a dark yet glowing sphere that she recognizes as containing Voidlight. He tells her to give a message to the Council of Five, to remember what they once were and "wake up." Eshonai runs from the room.

Eshonai is at the evening celebration, beating a drum, trying to lose herself in the rhythm. She has told the Five that Gavilar wants to bring back their gods, and that he has the knowledge to do it. Klade claims to have heard a voice leading him to an assassin, and the Five have agreed to have him kill the king. Eshonai weeps as she leaves the celebration.[10] 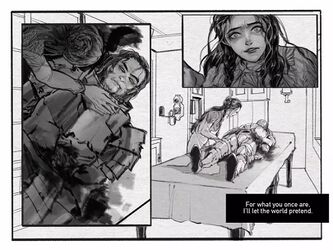 Navani is occupied with logistics for Gavilar's feast. While managing preparations, she interacts with Aesudan, who is speaking with Rushur Kris, a master artifabrian. She passes through the feast, but leaves quickly after seeing Dalinar. Looking for the king, she finds herself outside her study and overhears voices. Her husband is speaking to two men - a Makabaki and a Vorin man, supposedly ambassadors from the West. On the table between them, she sees strange spheres, which she assumes are meant for fabrials. Gavilar notices her and excuses himself. Navani presses him for answers about the spheres and questions him about missing appointments and responsibilities related to the feast. He, in turn, berates her for rumors of unfaithfulness that have been spreading around the court. They fight about Jasnah's refusal to court Amaram, which becomes a fight about Gavilar's legacy as king. He insults his wife's notion that she is a scholar and says she chose him over Dalinar for power, then leaves. Furious, Navani burns a glyphward which reads, Death. Gift. Death.

After the feast, Navani hears of the assassination. She does not believe that her husband is dead until she personally sees his body. She is stunned, hoping her glyphward did not lead to this outcome. She also feels pity, seeing her husband, who thought he was eternal, dead before her. Remembering the strange spheres from his meeting, she checks his pockets. Finding nothing, she conceals her actions. Navani composes herself, and begins the process of picking up the pieces among the chaos of Gavilar's death.[11]

Hours before the feast, Venli and Ulim seek a delivery from Axindweth in the palace, but instead find a coded message that she had to depart Roshar. Alethi soldiers spot her sneaking and lock her in a room, saying she will stay for the duration of the feast. Ulim returns in a panic, having spotted Shalash, Kelek and Nale. The latter Herald enters the room and uses his authority to free the pair; he speaks with Ulim with some familiarity. Anxious for her people, Venli steers Nale's interrogations about the voidspren to claim it is a failing on the humans' part that they have appeared. Presuming Gavilar is behind it, he convinces Venli of the need to eliminate the king and points her to Szeth, whose honorblade he recognized earlier. After he departs, Ulim convinces her to permit the assassination, as the threat of the humans' retaliation will give her the means to convince them to use forms of power.[12]

This article is still missing information. Please help The Coppermind by expanding it.
Retrieved from "https://coppermind.net/wiki/?title=Assassination_of_Gavilar&oldid=165414"
Categories: