Willshapers generally subscribe to a philosophy that all people should be free to make their own choices.[2] They focus on personal fulfillment, radical self-expression, and freeing those who are captive.[3] The order is said to be most varied, save for a general love of adventure, novelty, or oddity.[4][5] They tend to attract builders, craftsmen and other artisans.[2]

The Ideals of the Knights Radiant, also known as the Immortal Words, are a set of rules by which the Radiants live. The First Ideal is shared by all of the orders, and is used as a motto for the Knights Radiant as a whole. Each of the orders then have an additional four Ideals that are unique to that order.[6] The Ideals of the Order of Willshapers all focus on individual freedom and liberty; the Willshapers champion self-expression and freedom of choice for all.[2] Their oaths are generally acknowledged by Cultivation.[3][7]

—The First Ideal of the Knights Radiant[6]

—The Second Ideal of the Willshapers, as sworn by Venli[3]

Transportation allows the transfer of one's physical body into and out of the Cognitive Realm.[9] It works by creating a miniature perpendicularity that the Willshaper can go through.[10] It is significantly easier to enter the Cognitive Realm using Elsecalling than it is to leave it.[11] Willshapers are able to use this ability to worldhop.[12]

Cohesion allows them to alter the shape of solid objects in a way called Stoneshaping. This surge allows a Willshaper to make stone more malleable, like clay, or even a liquid. The Willshaper can then reshape the stone according to their desires. This surge also connects the Willshaper to the spren of the stone in a deep, fundamental way, though the full extent of this is not yet known.[8][13]

When a Willshaper is also a Regal, additional abilities arise. Though there is a voidspren within the singer's gemheart, the lightspren keeps it trapped. This allows the Radiant to retain their form's abilities and switch between red and normal eyes at will, letting them blend in with Odium's forces.[14] Regal Willshapers are able to use both Stormlight and Voidlight to fuel their Surgebinding.[15][16] These Willshapers are also highly resistant to suppression fabrials that stop Radiants from Surgebinding.[8] 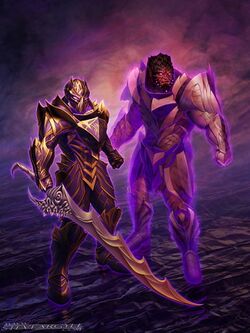 Little is currently known about the Willshapers of old. Though the order tended to attract builders, craftsmen and other artisans, their membership tended to be varied in both profession and personality.[2] They were varied in personality, but generally enjoyed discovering new, unusual and strange things; they were also considered capricious and unreliable, making them somewhat frustrating to interact with.[4]

Where the Windrunners were the protectors and the Stonewards the soldiers, the Willshapers were the liberators, both freeing those who were physically captive and aiding those who espoused new and radical ideas. They tasked themselves with building and supporting societies; they aided those who resisted tyranny and oppression. They were also literal builders -- in times of peace, they would use theirs powers to aid in constructing buildings and infrastructure, as well as training those who lived there; in times of war, they would fortify towns; and after the battle was over they, like their patron Herald, would travel to teach people of crafts such as bronzeworking or sanitation.[2]

Much like the Elsecallers, they were considered to have an affinity for Shadesmar, suggesting that they might've also interacted with the spren nation on regular basis.[17]

In the modern times, no human Willshapers have presented themselves so far; Venli appears to be the only person to have bonded a Reacher.[14]

“And now, if there was an uncut gem among the Radiants, it was the Willshapers; for though enterprising, they were erratic, and Invia wrote of them, "capricious, frustrating, unreliable," as taking it for granted that others would agree; this may have been an intolerant view, as Invia often expressed, for this order was said to be most varied, inconsistent in temperament save for a general love of adventure, novelty, or oddity. ”

This article is still missing information. Please help The Coppermind by expanding it.
Retrieved from "https://coppermind.net/wiki/?title=Order_of_Willshapers&oldid=166121"
Categories: