Rysn is a young woman from Thaylenah on Roshar. She currently works in the Thaylen Gemstone Reserve, managing Queen Fen's personal finances. Previously she was an an apprentice merchant under her babsk Vstim. She has a pet Larkin which she calls Chiri-Chiri.

Rysn has the long, white eyebrows typical to the Thaylen that she tucks behind her ears. She wears a glove on her safehand, although she finds the practice of covering safehands a silly tradition resulting from Vorin cultural dominance. She usually prefers to wear vests over long-sleeved shirts and ankle-length skirts.[1]

Rysn was trained as a merchant by her babsk Vstim.[1] She is a good observer of character[1] and determined when she bargains.[2] Her biggest fault, as defined by Vstim, is her prejudice against other nations and cultures.[1]

Five months into her apprenticeship, Rysn traveled with her babsk to Shinovar. There, they offered Soulcast metal, which the Shin valued highly because no stone was broken in the process of acquiring it, in exchange for chickens, cloths, and exotic dried meats. Rysn thought Shinovar very strange because of its different plant life, lack of spren and strange culture. She called the Shin grass imbecilic, and couldn't understand how it survived Highstorms. Her babsk made her take a pot of it and told her to care for it until she no longer found it odd, claiming that it would make her a better trader. After setting up an Alerter fabrial, they met with their contact Thresh-son-Esan. Rysn was surprised to learn that soldiers were considered the lowliest of men among the Shin, while farmers were the most respectable, akin to craftsmen or tradesmen in her own culture. Rysn watched as Vstim and Thresh bargained, each one taking pains to explain how worthless their wares were. Rysn, puzzled, found this very uncharacteristic of her babsk. After Vstim and Thresh came to an agreement, Vstim asked Rysn what she learned. Rysn realized that the Shin are a humble people, and in their culture, it was viewed as more honest -- and therefore more moral -- to devalue your products than to overstate their worth.[1]

Despite Rysn's initial concerns, the goods they bought from the Shin proved to be very profitable. Rysn ended up naming her pot of grass Tyvnk -- meaning "sullen" in Thaylen -- because, rather than being sullen at being so overtly wrong while Vstim was right, she let her grass be so.[2]

Rysn: " You will take the trade. You will trade with me. "
Talik: " Oh? And what makes you say this? "
Rysn: " Because Relu-na approves of boldness. " 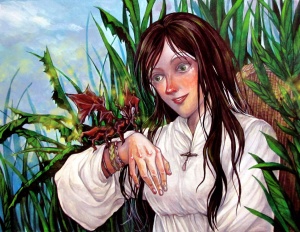 Rysn and Vstim's next adventure was in the Reshi Sea. They made their way with a caravan of sixteen longboats laden with people and goods purchased cheaply in lands rimming the Purelake, guided by a Purelaker named Gu. Rysn acted as the trademaster because of Vstim's sickness. Rysn was astonished to learn that the "islands" the Reshi lived on were really the backs of gargantuan greatshells called Tai-na. Like in Shinovar, she viewed local customs as primitive and was dismissive of them. Once they landed, Vstim told Rysn that she would have to trade with the Reshi. Vstim's illness made him weak, and that would ruin the deal. He told Rysn that the Reshi appreciated strength and boldness. On her way with Kylrm and Nlent to the meeting with the Reshi trademaster, she saw people jumping from the shell of the Tai-na to the sea. An Aimian named Axies the Collector, who was hanging upside down and tied by his feet to a shell nearby as a punishment for asking the king about the soul of his god, informed her that the Reshi did this to show their courage. Rysn continued climbing all the way up to the head of the Tai-na to meet the King, who, to Rysn's surprise, turned out to be a woman. A man named Talik spoke for the King and introduced their island's god as Relu-na, then asked why Vstim was not attending. Rysn informed him she was authorized to handle the trade, but Talik told her that the deal was off. Rysn continued trying to convince Talik to take the deal, and managed to impress the king enough to speak with her directly, although all she did was inform Rysn that she would not complete the trade, choosing instead to wait for Vstim to recover from his illness. Rysn, believing that Vstim's illness was fatal, was desperate to close the deal. Deciding there was only one way to show her boldness, she climbed down the rope used to feed the Tai-na and pleaded her case directly to the island's god. She hung there for a time in direct disobedience with the King's orders, but Relu-na's motions to catch the rope snapped it in two, leaving Rysn to fall. For a split second she saw the greatshell's eye, then felt a rush of wind as she crashed into the sea, then fell unconscious.

Rysn woke up back on a longboat, where Vstim told her Relu-na had slowed her fall and saved her life. Rysn's legs were shattered in the fall, however, and she would never walk again. Rysn soon figured out that Talik was a former apprentice of Vstim, that Vstim wasn't as sick as he appeared, that the trade had been finalized long before their arrival, and that Vstim had set up the meeting with the Reshi so that Rysn could practice negotiating in a controlled environment, but that now the Reshi would definitely trade with her again, and so would all the other isles. They had come to the island to trade for the corpse of a larkin, a species believed to be extinct by the rest of the world, but the Reshi gifted Rysn a live one in reverence for her bravery.[2] 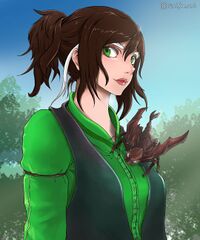 “This is my consequence—payment for a contract I entered into willingly the moment I climbed down the side of that greatshell.”

Rysn, embarrassed about her shattered legs and thinking her freedom and career as a trader was over, took the job Vstim offered her at the Thaylen Gemstone Reserves once she graduated from his tutelage. She'd taken down most of the relics from her travels because they reminded her too much of what she’d lost. However, she still kept the pot Shin grass from her first expedition and looked after Chiri-Chiri the Larkin, which was now slightly longer than Rysn’s palm. Rysn was preparing for a visit from an important auditor when Vstim, who turned out to be the man she was waiting for, was brought into her office by a guard. He offered her the captain’s cord to an expensive ship called Wandersail. Rysn mentioned that she had approached a Radiant and was going to ask him to heal her legs, but by the time she'd gotten to him, it had been too long and they had become a part of her identity.

After Rysn opened the Gemstone vault for Vstim, she had the guards carry her to Vault Thirteen, which held the King’s Drop, but the guard holding her chair was killed by a queen’s guard. Rysn pulled herself along the floor, tying the King’s Drop to her leg using the captain’s cord after the traitor dropped it fighting with other guards. Rysn made her way toward the door, grabbing the crossbow of a fallen guard as she went. She then realized that she couldn't cock it as long as she couldn't stand, so she tied the crossbow to her chair using the captain's cord in a makeshift pulley. She watched as Chiri-Chiri fed on the Voidlight the traitor was holding, then shot the Singer through the chin.[3] Rysn was later found lying next to Vstim's injured body by Dalinar after the Gemstone Reserve had come under further attack. She informed Dalinar that the enemy had stolen the King's Drop.[4]

This page is probably complete!
This page contains most of the knowledge we have on the subject at this time.
It has yet to be reviewed.
Retrieved from "https://coppermind.net/wiki/Rysn?&oldid=132279"
Categories: