This page or section needs to be updated with new information for Dawnshard and Rhythm of War!
Be aware that in its current state, it may not include all additional content yet.

Aimia is a group of islands on Roshar that is separated from the main continent by the Aimian Sea.[1] Aimia is also the name of the largest island in the chain.[2] The islands contained one of the Silver Kingdoms of Roshar that survived the Desolations.[3] The Kingdom of Aimia existed for part, if not most, of the Era of Solitude, but at some point it was decimated in the scouring of Aimia.[4][5] 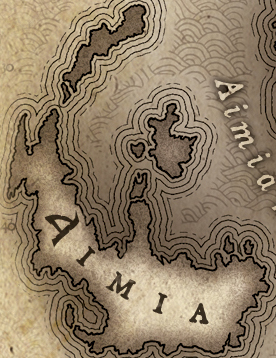 by Isaac Stewart
Map of Aimia

Aimia is an island chain that consists of one large island and numerous smaller islands situated off the west coast of Shinovar. It is bordered on the east by the Aimian Sea and on the west by the Endless Ocean.[1] Aimia is subject to highstorms.[6]

One of the smaller islands at the north end of the chain is called Akinah.[7] This island has undersea caverns, and it is possible some other islands do as well.[8][9] It is well protected from outsiders, due to a Dawnshard having been present on the island until Rysn became it and left.[10][11]

A decent number of humans resided in Aimia at one point. It appears that since the scouring they have been killed or fled, some of them to Alm. These people did their beards in the same corded way as those from Steen. Little else is known about them.[12]

In addition to the human Aimians, there are two distinct races of Aimians: Dysian Aimians (or Sleepless)[13] and Siah Aimians.[14] They are both non-human[15] sentient beings. Although they are not related,[16] they each possess numerous unusual traits including a form of immortality[17][18] and the ability to magically modify their bodies.[19][18] Humans are able to mate with Siah Aimians[20] but not Dysian Aimians.[21] Although the Aimians have no shared ancestry with humans or singers, they were created by the same person, presumably Adonalsium.[22][23] This implies that, like humans and singers, they existed before the Shattering. However, it is unknown whether or not either are native to Roshar.[24]

The relationship between the two races is not known, but they coexisted on the islands for thousands of years. The Sleepless Arclo refers to the Siah Axies the Collector in a familiar manner.[18]

Aimia was a desolate and barren place, too cold for anything to grow. In order to become habitiable, some sort of device or devices, likely fabrials, were employed during the Heraldic Epochs to change its climate.[12]

Many of the animals native to Aimia differ from other animals on Roshar. Unlike Shin animals, Aimian animals fit into the ecosystem of Roshar but have exceptional features that make them distinct, including the lancer, known for their large gemhearts,[4] and larkin, known for ingesting Investiture such as Stormlight.[25] Lanceryn and larkin are directly related in some way.[26][11] Aimian animals are now exceptionally rare and modern Rosharans incorrectly believe that larkin are extinct.[4][27] The few larkin remaining appear to have been taken in by the Na-Alind, and Rysn was given one of these in the Reshi Isles.[28][29]

At least one ancient text alludes to delicacies that come from Aimia,[30] possibly from endemic plants or animals.

At some unknown point in the distant past, a Dawnshard was taken or came to Aimia and was trapped in the Akinah Dawnshard mural.[11] This Dawnshard was protected by the lanceryn.[11]

Aimia was one of the Silver Kingdoms during the Heraldic Epochs. It contained an Oathgate connecting it to Urithiru.[5][31] As one of the ten kingdoms and a holder of an Oathgate, it likely held one of the ten thrones in Urithiru.[32] Akinah was the capital of the kingdom, and it was once a grand city built on a natural rock formation with tenfold symmetry.[33][7] It was also known as the location to obtain Soulcasters.[7] Siah Aimians were integrated into larger Rosharan society to the point that they are partial ancestors of some ethnic groups on the main continent.[20] At least some of the Aimians were close allies of the Knights Radiant.[12]

At some point, a scouring occurred at Aimia, however, what exactly occurred, and why, is unknown. While the exact time is uncertain, it occurred after the Recreance[4][12] but longer than four hundred years before the Everstorm's arrival.[36] Axies the Collector recalls it being fairly recent,[14] while Nikli recounts it as being many generations ago.[12] Nikli believes that Aimia's fall was due to its extreme riches being too tempting to the rest of the world.[12]

“They assumed their secrets would protect them, but then their allies fell. And secrets can't hold swords.”

—Nikli to Rysn on the Scouring

The fabrials or other devices regulating Aimia's climate were destroyed, leaving the islands desolate and barren.[12] The scouring decimated life on the islands. Native animals nearly went extinct,[27] and members of both of the immortal races are now rare.[14] The surviving humans fled to other nations.[12] The last few larkin were taken in by their cousins, the Na-Alind.[29] The Oathgate in Akinah fell into disuse, isolating the islands.[5][31]

With the fall of the lanceryn and dispersal of the larkin, the Dawnshard was left unprotected. The Sleepless residing there decided to take up the role of its guardians because they did not want the power to fall into the wrong hands, as it was capable of destroying billions of people.[37]

The Aimian Sea near the islands became very dangerous, with strange winds and storms that seem to originate in the islands.[7] In particular, one constant storm surrounds the island of Akinah.[7][38][39] Akinah is now surrounded by a wall of Soulcast stone spikes that are forty feet tall, with additional spikes underwater to deter ships.[7] Kaza believes that the spikes must have been created by multiple Soulcasters working together.[7]

Hessi theorized that an Unmade, possibly Dai-Gonarthis, caused the destruction of Aimia.[40]

Enough time has passed since the scouring that myths and stories about the Aimian islands and their people have spread.[14] Akinah has many nicknames including "The Rock of Secrets" and "The Void's Playground", and Rosharans speculate about what it contains.[7] Some individual Aimians survive, and at least some are still on the islands.[41] Other cultures on Roshar are aware that non-human Aimians still exist, but generally have negative reactions to them if discovered.[27] Legends also speak of creatures that can eat Stormlight[39] and creatures that are living heaps of cremlings,[12] although the latter legend has lost its association with Aimia and its immortals.

The Sleepless have been very dedicated to protecting the Dawnshard in the time since the scouring. They have killed anyone who gets near to discovering their secrets, with a total death toll numbering in the hundreds.[37] They even built a fake version of the city of Akinah, following the same cymatic pattern as the original, in order to build a ruined Oathgate replica, in hopes of dissuading anyone who manages to get that far from returning. The real Oathgate remains functional, albeit locked, underneath the replica.[42]

Very recently, perhaps coinciding with the arrival of the Everstorm, the protective storm around Akinah has weakened somewhat.[37] As a result of this, the ship First Dreams was able to approach Akinah, but the crew was poisoned by one of the Sleepless, who was actively preventing humans from reaching the island.[7] The Sleepless said that it was protecting a secret that could lead to the "end of worlds".[7] Kaza made it to shore and saw a larkin, or perhaps a hordeling with the appearance of a larkin, and the faked ruins of Akinah before dying.[7]

Recently, scouting parties have been sent to the main island and found it quite barren. The Royal Navy of Thaylenah has set up outposts there just in case.[29][39][2]

In late 1174, Rysn Ftori headed an expedition to Akinah which brought back eight Soulcasters and a set of Shardplate. Rysn became the Dawnshard and the Sleepless guarding it let her return, conceding that Akinah was growing too hard to protect.[11] [expand]

This article is still missing information. Please help The Coppermind by expanding it.
Retrieved from "https://coppermind.net/wiki/Aimia?&oldid=177084"
Categories: