Nikliasorm, also known as Nikli, is a Dysian Aimian living on Roshar.[1] It is at least 400 years old, though it is young for its species.[2] 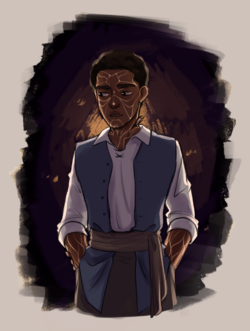 by Stivya
In human form

While in its human form, Nikli takes on the appearance of a Makabaki man with white tattoos on its face and arms to cover the spaces between its hordelings.[3]

Nikli is known among all the Sleepless swarms as being the most skilled at impersonating humans. It is one of the few Sleepless that has eye hordelings that are actually functional. This allows it to more realistically imitate humans than other Sleepless, who use prop eyes, since its sight lines actually line up with its eyes.[1]

Nikli is the youngest of the Dysian Aimians currently on Roshar. It was the twenty fourth swarm to Separate, only doing so after the scouring.[1]

After the discovery of the First Dreams, Nikli was sent by the Sleepless who guarded Akinah to be Rysn's personal servant so it could ensure that the Ancient Guardian was being cared for. Additionally, since they suspected that she might soon travel to Aimia, Nikli was instructed to attempt to stop her from reaching the island.[4] Initially, Nikli would overzealously try to assist Rysn in everything she did,[3] but it soon realized that she preferred being independant and doing things herself.[5]

When Rysn arrived at Urithiru Nikli told the master-servant who greeted them that she preferred using her own chair but Rysn corrected it, saying that the porters knew the city better than she did, and had Nikli bring the chair in case she needed it later.[5]

At some point between their trip to Urithiru and departing on the journey to Aimia Nikli hired an assistant, Plamry,[6] to help it perform its duties. Nikli and Plamry carried Rysn and her baggage aboard the Wandersail and carried her around the ship as she required it. Sometime before they departed, Nikli poisoned Screech, the Wandersail's skyeel mascot, in an attempt to frighten the crew so they would abort their mission.[4] After Nikli put Rysn in her new chair on the quarterdeck, it told her that it thought that the captain and the crew did not trust her. Nikli tried to suggest that they delay the trip so they could find a more suitable crew, but Rysn brushed its concerns aside, saying that they were good men chosen by Vstim and they had been training with the ship since it was built. When Rysn found out that Screech had died she told the crew that anyone who wanted could stay behind without penalty, placating the crew and foiling Nikli's plot. After Rysn found out why Drlwan resented her so much she had a philosophical discussion with Nikli about how sometimes you had to accept an imperfect solution for an imperfect world. Kstled returned to them and reported that although the ship's cook, Nlan, was among the sailors who accepted her offer, Cord would be able to take her place.[7] This put another kink into Nikli's plans,[4] and they set sail.[7]

Nikli decided to try and play off the Thaylen sailors' immense superstition by causing supposedly random events of misfortune to happen to the crew. The first attempt of this was to put worms in the ship's stores of grain; however, Rysn was able to avert disaster by trading it with a group of Hexi nomads. Nikli then went to a secluded corner of the ship in order to report to the other Sleepless, and pleaded to be allowed one final chance to turn away the voyage before having to kill them all.[1] This took the form of a group of hordelings imitating a santhid's corpse. Rysn, though, was again able to prevent the sailors' aborting the mission by suggesting that they go ashore and burn the santhid's corpse to give it a proper send-off; however, Nikli sent its hordelings swimming away before they could do so.

The next day, Nikli tried to frame Cord for the murder of Screech and the other omens, but, as Rysn had searched Cord's room herself beforehand, it became clear that its evidence was fabricated. Kstled restrained it, and once it was certain that it had been found out, it dropped its accent and told Kstled that nothing he could do to it would hurt it, and Lopen and Huio then removed it from the ship.[6] However, once everyone but Cord and Rysn had begun the exploration of Aimia, Nikli rematerialized on deck from its hordelings. It made clear that it intended to kill all of the voyagers, a declaration to which Cord replied by grabbing Rysn and diving overboard, following a trail of luckspren into an underwater cavern. Nikli, along with two other Sleepless, followed them to the cavern, but too late to fulfill their intent--Rysn had looked at the mural in the cavern and become a Dawnshard. Though they still intended to kill her, she put her training with Vstim to good use and opened negotiations with them.

In the end, Nikli agreed that Rysn would live and could let Cord keep the sets of Shards found in the cavern, and in exchange, Rysn would protect the Dawnshard when cosmere forces eventually came looking for it, and would never bond a spren or become Invested in any other way, so as to prevent a catastrophe such as what happened on Ashyn. The Sleepless would also be allowed to follow Rysn at all times to ensure that she was keeping her side of the bargain. Though the existence of the Sleepless would be shared with the world, a two-layer cover story would be created--the first being that the appearance of Chiri-Chiri caused the Sleepless to let them go, and Queens Navani, Jasnah, and Fen would be told that the Sleepless would be learning from Rysn how to imitate humankind. None of them would be told the existence of the Dawnshard, however.

Nikli is regarded by the Sleepless, particularly Yelamaiszin, as a valuable perspective, despite its youth, because of its greater understanding of humans.[1]

This page is probably complete!
This page contains most of the knowledge we have on the subject at this time.
It has yet to be reviewed.
Retrieved from "https://coppermind.net/wiki/Nikliasorm?&oldid=160227"
Categories: