“And lo, the foul beast avoided imprisonment for public indecency! ”

Axies the Collector is a Siah Aimian engaged in a quest to catalog all the different varieties of spren on Roshar. [1] He is basically immortal[2][3], and he researches spren as his way of finding purpose in immortality.[4] He is affected by the Curse of Kind.[1]

Given the hostility his race and appearance attracts and the likelihood of losing his possessions, he took to making his research notes by using his Aimian talent for altering his body to create tattoo-like markings on his skin for later reference. 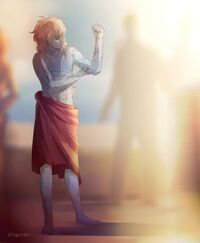 He was searching for evidence of the existence of alespren by getting drunk somewhere in Kasitor when he was beaten by unknown persons, robbed of his possessions, and left for dead in an alley. Axies awakens the next day naked, lying on a pile of foul-smelling rotted vegetables, and suffering only from a headache. He uses his ability to suppress his sense of smell and to banish the headache. He then meets a crazy beggar who is furious that his city of rotted vegetables had been trampled. The beggar asks Axies if he’s a Voidbringer or a Herald because of the destruction he caused to the beggar's city. After stating that he is a Voidbringer, Axies cleverly convinces the beggar to give him his blanket, so he wouldn’t be arrested for public nudity. Soon after, while observing Cusicesh in the city, the blanket is stolen from him by a street urchin and Axies is seized by the guards and arrested for public indecency.

Later on, Rysn found Axies hanging upside down from his feet as punishment for offending the religion of the people on one of the Reshi Isles.[5]

Shortly after the rediscovery of Urithiru, Jochi mentions a sighting of Axies in a spanreed communication with Jasnah Kholin.[6]

This article is still missing information. Please help The Coppermind by expanding it.
Retrieved from "https://coppermind.net/wiki/Axies?&oldid=157915"
Categories: