Cusicesh, the Protector is an extremely large spren in a bay neighboring the city of Kasitor in Iri on Roshar.[1] 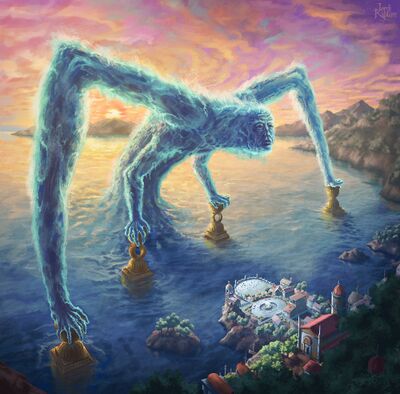 by Jordi Rapture
Above the harbor

At exactly seven forty-six in the morning every day, Cusicesh rises from the waters of the bay, sending out an illusory wake. This happens without fail such that the locals can set timepieces by its occurrence. It takes the form of a hundred-foot tall column-shaped jet of water, with four long arms that extend downward from the column and form fingers and thumbs. The arms always form in the same places, and the people in the city have placed large golden pedestals where the hands come to rest. It is a translucent sea-blue color, ranging from deep blue in the center to a lighter blue on the surface. It forms a face on a stumplike neck that always looks east toward the Origin; the face shifts very rapidly into different human faces, both male and female. The faces continue to cycle for ten minutes, and Cusicesh then retreats into the water, leaving another illusory wake.[1]

Cusicesh is one of very few unique spren on Roshar, and it is also one of the largest. It often leaves people who witness it with a feeling of being drained.[1] It is made up of more Investiture than a typical spren, although it is not on the same "level" as the Stormfather or the Nightwatcher.[2] It is not capable of forming a Radiant bond, for reasons unrelated to its level of Investiture.[3]

Cusicesh has been present in the bay for a very long time.[4] It is ingrained into Kasitor society to the point that it dictates the local system of timekeeping.[5] The people of Kasitor have constructed a viewing platform on the bay in order to provide better views of Cusicesh, and the platform can get crowded when the spren makes its daily appearance. Most Iriali consider Cusicesh to simply be a part of the city, although some people worship it as a god.[1]

Cusicesh's remarkable attributes give it a level of renown in other parts of Roshar.[6] Axies the Collector, an avid observer of spren, made a trip to Kasitor to see Cusicesh. He was fascinated by the spren and was not able to categorize it with any others that he had encountered in his travels. He took notes on several of its unique qualities.[1]

This page is complete!
This page contains all the knowledge we have on the subject at this time.
Big Smooth (talk) 20:55, 12 April 2021 (UTC)
Retrieved from "https://coppermind.net/wiki/Cusicesh?&oldid=163809"
Categories: