“Vines, ferns, flowers, and grasses grew together in a wall of underbrush. Trees stretched above them, and these weren't the durable stumpweights of his homeland. These were gnarled, tall, and twisted, with branches that wound together. They were overgrown with draping moss and vines, lifespren bobbing about them in plentitude. ”

The Valley is the home of the Nightwatcher on Roshar.

The Valley is located in the mountains of Ur, near Urithiru itself.[2] The area nearby is devoid of rockbuds, and the ground is covered in wrinkles about two or three inches deep. On the stormward side, the wrinkles are covered in lichen and on the leeward side, they are covered in flattened grass.[1] The trees nearby are scrawny and hunched over with thistle leaves. The nearby mountainsides are bare and few people live in the surrounding area. Little black birds the size of a man's fist can be found in the area, although they don't often venture on that particular side of the mountains between Emul and Hexi. The ground is covered in fans of weeds that tremble and rattle when touched. It is unknown if this terrain is common in Hexi or unique to the surrounding area. 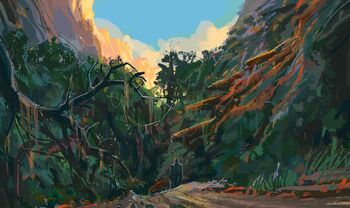 “There was a... feeling to the place. Like you could hear all of those plants growing. The valley shivered and cracked. ”

Foothills shield the area from highstorms, resulting in an explosion of plant life. The plant life is so dense it seems impassible, but there are some trails leading through the area. The wind blowing out of the valley is hot and muggy, the air inside musty and damp. It is filled with the sounds of vines rustling and tiny animals scampering among them. Life is so abundant that it seems as if you can hear the plants growing. It is filled with low hanging vines, and the ground is covered in rotten wood. It is dark enough that those inside can barely see. The trees are covered in hanging moss and their bark is wet.[1]

“You'll be in her power, in there. And you don't get to pick the cost.”

The Valley is the home of Cultivation and her spren, the Nightwatcher. The Nightwatcher is a powerful spren who is connected to the Old Magic.[3] Many people, even Alethi nobility, journey to the Valley to seek a boon from the Nightwatcher.[4] As a result of Cultivation's presence, the Thrill cannot be felt in the Valley, or at least Dalinar is unable to feel it when he visits, despite the fact that he feels he is undergoing a challenge worthy of the Thrill.[1] According to Felt, upon entering the Valley, one is completely in the power of the Nightwatcher. When Dalinar visits, he has a vision of himself killing Elhokar, becoming king, and conquering the world.[1] It is unknown if this was a vision due to Dalinar's unstable emotional and mental state at the moment or the magic of the Valley.

This article is still missing information. Please help The Coppermind by expanding it.
Retrieved from "https://coppermind.net/wiki/Valley?&oldid=155815"
Categories: