Arclomedarian,[1] also known as Arclo, is a Dysian Aimian who resides in Tashikk. It is thousands of years old, having been alive since before the Last Desolation.[2]

“I'm building a philosophy, one meaningful enough to span ages. ”

Its true form is made of many cremling-like creatures it refers to as hordelings that fit together to form the different parts of its body. Arclo typically imitates the form of an elderly man with dark skin and a grey mustache.[3] It is very interested in philosophical debates and often brings up some of these ideas when it speaks to Lift,[3] at one point even going off on several philosophical tangents when Lift is meeting with it in the alleyway where it killed the two Skybreakers acolytes.[2]

Over many years Arclo has bred its hordlings to allow it to change its appearance to that of a human. It does its best to maintain as close to a human form as it can, but it is not confident in its ability to fool humans, and so it conceals most of its body in a tightly wrapped shiqua to compensate for this. Arclo's hordlings can sense Lift's spren, Wyndle.[2] 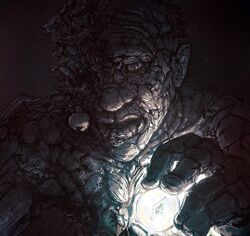 “Your war is my war, and has been for millennia. Ancient Radiants named me friend and ally before everything went wrong. What wonderful days those were, before the Last Desolation. Days of...honor. Now gone, long gone. ”

Arclo was known to sit on the porch of the orphanage in Yeddaw and it met with Lift there several times. During their conversations, it asked her about which body part she felt she was, which she brushed off as a dumb question.[3][4] Lift later sought Arclo out when Szeth told her that it was the other Radiant in Tashikk that Nale was searching for.[5] She found it in an alley with the corpses of two of Nale's trainees. Arclo revealed its true form to her and guided her towards the person she was actually looking for.[2]

“Arclomedarian crosses us again. It meddles more and more. It has met with these new Radiants. ”

Unlike many of the other Sleepless living on Roshar, Arclo is not participating in guarding Akinah and the Dawnshard that is being hidden there. It does not follow Yelamaiszin the First, the leader of most of the Sleepless on Roshar, who consider Arclo's meeting with Knights Radiant to be dangerous. Due to this and other "meddling", the other Sleepless have cut Arclo off from their communications.[1] However, they don't hate it the way they do the "true traitors."[6]

This page is probably complete!
This page contains most of the knowledge we have on the subject at this time.
It has yet to be reviewed.
Retrieved from "https://coppermind.net/wiki/Arclomedarian?&oldid=159596"
Categories: