“It is blissful. I slowly connect to the device, and through it to Roshar. Until the day it will take me fully into its embrace. I could show you. Feel my touch, and you can know. One moment, and then you will mingle with the air itself. ”

Kaza is a member of the Liaforan royal family on Roshar. She attempts to visit Akinah on the First Dreams, seeking a cure for her Soulcasting savanthood.[1]

Kaza is Liaforan and presumably has dark brown skin and eyes. Her age is unclear, although she mentions being past her middle years and "feeling her age". She has been Soulcasting things into smoke since her youth, and shows significant physical disfigurement from being a savant; parts of her body, including her face, are gradually turning into smoke. The areas of her body that are disintegrating are translucent or even missing, and dark smoke emanates from them. She wears a hooded robe and black gloves to conceal her condition.[1]

Her condition has also caused her to lose familiarity with aspects of human behavior. When Droz, a sailor on the ship, speaks to her, she has to consciously remind herself of reasons why someone might do such a thing, and ultimately scares him off. She speaks matter-of-factly about her condition and her ability to see into the Cognitive Realm and is confused about why other people find such discussions disturbing. The sailors of the First Dreams avoid looking her in the eyes.[1]

She has an independent streak and has long felt controlled by the royal family; she makes her trip to Akinah in defiance of them and resents the way that they essentially imprisoned her to maintain control of the Soulcaster. She makes it clear to Captain Vazrmeb that she is helping him by choice, and that she is a person and not a thing to be used. Before dying, she chooses to transform herself into smoke as a final assertion of her control over her own destiny.[1]

Kaza is intimately familiar with the use of a Soulcaster fabrial that can produce smoke. The Soulcaster has three large gemstones (presumably smokestones)[2] and is worn on her hand. She notes that her Soulcaster is the type that only has one "mode"; she can only Soulcast objects into smoke and she cannot return previously Soulcast objects to their original state. She began using the Soulcaster as a youth and continued using it throughout her life, becoming a savant. She does not wear the Soulcaster all the time, but she keeps it in a pouch on her person. She feels contentment when she puts it on.[1]

“...I am no ordinary Soulcaster. I have begun to see the dark sky and the second sun, the creatures that lurk, hidden, around the cities of men ” 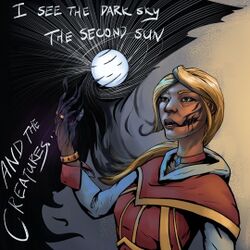 Kaza's lifelong use of her Soulcaster has caused her to become a savant. [3] She spent a large amount of time with the fabrial in her youth, learning its secrets. She is able to transform part of an object, which is beyond the skill of most Soulcasters. There are limits to her abilities, as she cannot Soulcast very large objects completely into smoke. She can see, at least partially, into Shadesmar, including the full shapes of spren. She describes Soulcasting as "connect[ing] to the device, and through it to Roshar".[1]

Her savantism has also affected her mind and her body. In addition to the difficulty that she has relating to other people, she seems to constantly fight back a desire to become smoke herself when she is actively using her Soulcaster. When she transforms something into smoke, she feels joy in her soul, and thinks about the freedom that would come from turning into smoke. Physically, she is slowly disintegrating, and believes that she takes a step towards death each time she uses the Soulcaster; she believes she only has a few years left to live. She barely needs to eat and she can no longer taste food, although she still enjoys its smell. When she drinks, she has to take care not to spill the liquid from the holes in her cheeks. She resists the poison administered by the cook of the First Dreams much longer than everyone else on the ship, and the cook describes her as "barely human anymore".[1] 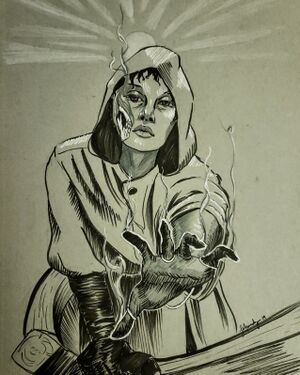 Kaza was a cousin of the Liaforan prince. As a girl, she enjoyed collecting cremlings and aspired to be a naturalist. However, she was assigned to use a royal Soulcaster, which was "always to be kept in the royal family". She grew extremely attached to the Soulcaster over the years and used it throughout her adulthood, to the point of becoming a Soulcasting savant as she aged. She came to think of the Soulcaster as belonging to her alone. Because of the value of the Soulcaster, she lived under lock and key, although she was provided whatever comforts she desired; the royal family hoped to pacify her, since she could have easily used the Soulcaster to escape confinement. She grew increasingly bitter that she was treated as a tool, rather than a person.[1]

Captain Vazrmeb of the First Dreams somehow learned of Kaza's abilities and realized that she could help him on his quest to navigate to the ancient capital of Aimia, the lost island city of Akinah. Kaza decided to work for him due to rumors among Soulcasters that Akinah might hold secrets regarding a cure for savanthood; her anger at the royal family also motivated her to leave. She somehow escaped confinement and joined the captain on his journey.[1]

Kaza managed to stay aboard the ship with some difficulty as it traveled through an unusual storm in the Aimian Sea. The storm subsided near Akinah, and after some awkward interactions with the crew, she was able to partially Soulcast large rock barriers to allow dinghies from the First Dreams to approach the island. However, the ship's cook, a Dysian Aimian, poisoned her and the rest of the ship's crew in order to prevent them from reaching the island. Kaza's savanthood helped her resist the poison, and she was the only person to make it onto land, briefly glimpsing a large gemheart on the shore and a dark city of stone. She asked the cook about the island's secrets, but the cook told her that the secrets were too dangerous to entrust even to the dead.[1]

Before Kaza succumbed to the poison, the cook's hordelings attempted to remove her Soulcaster. Kaza finally gave in to the urge to turn her own body into smoke. She Soulcasted herself and the ground around her, emphasizing that she was choosing her own destiny.[1]

This page is complete!
This page contains all the knowledge we have on the subject at this time.
Big Smooth (talk) 00:39, 30 October 2020 (UTC)
Retrieved from "https://coppermind.net/wiki/Kaza?&oldid=171981"
Categories: