“The santhid. It rescued me. ”

Santhidyn are massive shelled marine animals native to Roshar. They are one of a few Rosharan species known to have some degree of sapience.[2]

Santhidyn are so rare and reclusive that some scholars believe them to be extinct, although sailors sometimes sight them and dead specimens occasionally wash up on shore. There were no known pictures or reliable descriptions of live specimens until a santhid was observed and drawn by Shallan Davar.[3]

Santhidyn have a dome-shaped brown-green shell on the top of their bodies, about the size of three rowboats tied together and at least six or eight feet in height. The shell is sometimes overgrown with seaweed, and small crystals jut up from it. While the santhid is swimming through the water, the shell looks like a tiny, mobile island. The shell extends underwater, such that no other part of the animal can be seen from a ship, only shadows.[3]

Underneath the shell, their bodies are a knotted gray-blue mass. They have long, very thick blue tendrils that trail behind the santhid at a drooping slant. Their skin is rippled and folded, gnarled like an ancient tree. They have an eye the size of a human head on each side of their body and three enormous fins on each of their flanks.[3]

Although it is unclear if santhidyn are categorized as "greatshells", they have some characteristics in common with other animals such as the yu-nerig and Tai-na, and they are part of the same family tree as chasmfiends.[4] Shallan observes arrow-shaped spren, presumably mandras, near a santhid.[3] These spren are known to enable animals to grow to enormous size on Roshar.[5][6] The size and anatomy of santhidyn may also indicate that they have gemhearts.[7] 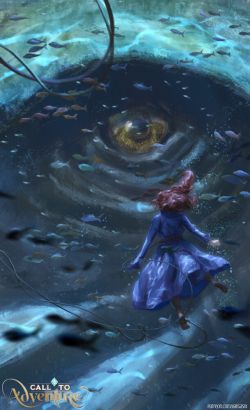 “Do you realize that nobody has ever produced a drawing of a live santhid? All the ones that have washed up on beaches were badly decomposed.”

Sightings of santhidyn are extremely rare. Even full-time sailors may only see one every few years. When a santhid does encounter a ship, they may sometimes follow it for days, even waiting at sea for the ship if it visits a port of call. Their large fins allow them to swim quickly and smoothly, and they seem to easily keep up with ships, even over long distances. They are generally considered harmless, and there are even stories about santhidyn saving people from drowning, although their presence still worries some sailors since they are enigmatic creatures.[3]

Santhidyn have some degree of sapience. This is related to the Shard Cultivation[2] and presumably facilitated by a relationship with spren, although this relationship is not well-understood.[8][9][10] Shallan noticed that a santhid seemed to focus its eye directly on her;[3] she believed that the same santhid later rescued her from a shipwreck.[1]

The waters around santhidyn are teeming with life. Schools of small fish usually follow santhidyn, picking at the underside of their shell, perhaps indicating a symbiotic relationship. If a santhid approaches a ship, fish will move back and forth between the two, also picking at the bottom of the vessel. Shallan theorizes that the feeding behavior of the fish may be the reason that santhidyn sometimes follow ships.[3]

Because sightings are so infrequent, the full range of santhidyn is unclear, although their size presumably limits them to deeper waters. They have been observed in Longbrow's Straits and the Southern Depths.[3][1] 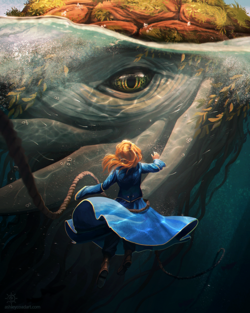 Santhidyn are rarely seen by sailors, and even more rarely by scholars. A naturalist named Naladan spent her entire career chasing santhidyn and never got a good look at one. Sightings are so infrequent that there is a great deal of disagreement about their nature, and even their existence. Some corpses have washed ashore, but they are generally badly decomposed and not useful for study.[3]

Shallan Davar and the crew of the Wind's Pleasure encountered a santhid in Longbrow's Straits in in 1173. Shallan was determined to observe the creature underwater, and ordered the crew to tie some ropes around her and lower her over the gunwale down to the water, against Yalb and Tozbek's better judgment. Shallan was amazed at the santhid's massive, majestic body and the many fish and spren surrounding it.[3] She was ecstatic after emerging from the water and made a number of sketches of the great animal.[11]

When the Wind's Pleasure later sank off the coast of the Frostlands, Shallan managed to survive; she made landfall near the Shallow Crypts.[12] When she woke up, she did not remember what had happened, but she saw a santhid leaving the area. She believed that it was the same santhid she had encountered in Longbrow's Straits, even though she had since traveled a significant distance without seeing it again. She assumed that the santhid had saved her, and speculated about its level of intelligence.[1] She lost her original drawings during the sinking, but later recreated some of them.[13]

During the expedition to Akinah, the crew of the Wandersail came across a replica of a dead santhid formed by a Sleepless. Thinking it to be a regular santhid corpse, the crew were certain that it was a terrible omen until convinced by Rysn that, like a dead santhid washing up on shore, it was actually a good omen and that the crew should give the creature a proper burial. Upon the crew attempting to haul in it for a burial, however, it split into its constituent hordelings, horrifying the crew.[14]

“You are good luck, young miss! We ain't seen a santhid in years. ”

Thaylen sailors consider santhidyn to be very good luck and a good omen, whether alive or when washed on the shore, and respect those they do encounter as if they were sacred. Killing a santhid is considered to be a monstrous act and rumored to attract extremely bad luck, and even the thought of hunting one is enough to make most uncomfortable. They often tell stories about santhid sightings and behavior. Scholars such as Shallan and Jasnah are aware of the reverence that sailors hold for santhidyn.[3]

Santhid shells are sometimes displayed in coastal cities such as Amydlatn [3] or at the naval academy of Thaylen City.[14] Mraize also appears to have a part of a santhid skull in his "trophy room".[15]

Santhids are believed to magnify peace and confidence, and some people consider them to be more spren than animal.[14]

This page is complete!
This page contains all the knowledge we have on the subject at this time.
Big Smooth (talk) 22:02, 16 November 2020 (UTC)
Retrieved from "https://coppermind.net/wiki/Santhid?&oldid=164707"
Categories: