Mandras are a type of spren on Roshar. In the Physical Realm they are called luckspren,[1][2][3] chasmspren[4] or apaliki'tokoa'a.[5] In Shadesmar, they are used for transportation.[3] 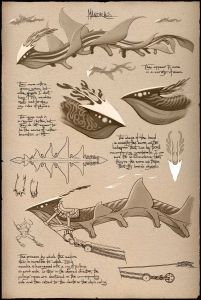 Mandras have triangular shaped heads,[6] which are the exact same shape as those that are found near greatshells in the Physical Realm.[1] They come in a variety of sizes;[1] the ones used for pulling ships in Shadesmar are much larger than luckspren that appear in the Physical Realm.[3] Their bodies are long, sinuous[6][3] with multiple sets of legs[1] and multiple sets of undulating wings along their bodies.[6] The wings move at a regular rhythm.[1]

Luckspren have the appearance of tiny, blue, arrowhead-like fish that dart around the creature they're swarming in the general direction of its travel.[7] The shape of their heads correspond to the triangular heads of the Mandras.[3] Luckspren are often found near greatshells, chasmfiends, skyeels, anything that is lighter than it appears to be.[3] They appear in swarms around Skyeels.[2] When they disappear from the physical realm it is like a small plume of smoke rising into the air.[7]

Mandras are the spren who bond with greatshells, chasmfiends, and larkin, preventing them from being crushed under their own weight. This was discovered by Bavamar with mathematical calculations.[3] Mandras from different locations can be different sizes and strengths, and a greatshell may need to return multiple times during their lifecycle to bond additional mandras so they can continue growing.[8] Mandras seem to avoid the rules of physics[1] and their wings are not the source of their locomotion.[1] They can be pushed to exhaustion.[9] 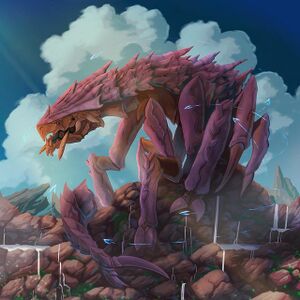 by Connor Chamberlain
Mandras flying around a chasmfiend

Mandras have a tendency to vanish, called "dropping". This is occurs when they get pulled into the Physical Realm.[3] They cannot be removed from human population centres for long as they begin to waste away and die. Why this happens is unknown to the lightspren who use them to pull their ships.[3]

Mandras are seen to be used in Shadesmar to pull ships by lightspren,[3] honorspren,[10][11] and most likely anyone other ship crew as every ship in Celebrant has them.[12][10] They are harnessed with a set of pulleys on either side of their body. To steer them in either direction the sailors shorten one of the pulleys and tie it off on cleats connected to the sides of the ship.[1] The Mandras hooked to the honorspren ship have golden harnesses[10] and they employ more than just two, having Mandras attached to wings on the side of their ship.[11]

Because of Mandras' tendency to "drop" the sailors always employ at least two Mandras[12] so they do not end up stranded.[3] Once the ships have docked the Mandras are detached from the ship using long hooks and lead away.[12] Adolin wonders if they are attached to the stern of the ship to pull them from the docks[12] but given that Adolin is Alethi, a people who are infamous for knowing little about sailing,[13] this is to be taken with a grain of salt.

Mandras do not seem to like fire. Their sailors try to control and move them away when Ico's ship is burning.[10]

This article is still missing information. Please help The Coppermind by expanding it.
Retrieved from "https://coppermind.net/wiki/Mandra?&oldid=160825"
Categories: