“Merchants are like fish. Where you find one, you’ll find others. ”

—Yalb to Shallan in Kharbranth when looking for a bookstore[1]

Yalb is a Thaylen sailor on Roshar. He is a crew member of the Wind's Pleasure.[2]

Yalb is a young sailor who usually wears an open-fronted vest and a pair of loose trousers.[3] Yalb has a lazy contentedness and a smirk.[4] He speaks with a thick rural Thaylen dialect, has an affable voice[4] and speaks with the gentle flirtation of a sailor.[2] Yalb believes in the Passions to some extent.[1] Yalb takes it upon himself to look after new sailors, but enjoys winning spheres off of them.[5]

He has a talent to cheat at kabers and uses it to beat lawmen like the city guards of Kharbranth.[1] He is also able to detect ships on the horizon at an unusually long distance.[6]

He traveled on the Wind's Pleasure with Shallan and was selected by the captain to accompany her to the Kharbranth Conclave where she would meet Jasnah for the first time. He earns her trust, and she asks him to wait for her, giving him a ruby mark.[2] When she comes out of the Conclave and lets him know Jasnah rejected her, he convinces her to try a third time and helps her find a book merchant. While she was shopping, he came into the shop and helped her get a much better price for the books.[1] 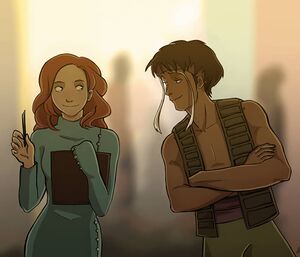 His crew is selected by Jasnah for taking her and Shallan to the Shattered Plains. Yalb helps the latter go underwater to see a santhid, a rare sea animal.[3] The Wind's Pleasure later picked up a new member for the crew at Amydlatn,[7] who was actually hired by Tyn to kill Jasnah.[8] During an attack carried out by Tyn's assassins, a number of sailors were killed and the rest likely drowned when Shallan soulcast the ship into water to try to save them.[9] As a result, Yalb is presumed dead.[9] However, shortly after the sinking of the Wind's Pleasure, Shallan sketches Shalash destroying a statue of herself, despite having no knowledge of Shalash's actions post-Aharietiam; at the same time, she also does a sketch that shows Yalb and a few other crew members helping each other out of the water near a rocky shoreline. Shallan dismisses this sketch as simply the product of a worried mind, however,[10] and, when depressed by her role in the death of Grund, thinks of Yalb as dead.[11]

After the sinking of the Wind's Pleasure, Yalb survived along with two other sailors. He was not able to sail with the other survivors as rumors have spread that the Wind's Pleasure was a ghost ship and sailors were uncomfortable sailing with them. Yalb found himself working on a ship under Captain Smta alongside Alethi sailors. He gave a traditional sailor's welcome, complete with hazing, to Dok, one such Alethi sailor. As he was convincing Dok of the existence of sailorspren, Yalb spotted the crewless First Dreams.Yalb was tasked to board this ship due to his experience with ghost ships. A search returned with nothing of value but Yalb believes that the value of the ship itself in war means the captain will put him on it to bring it home.[6]

Like all sailors, he has a flirting way with Shallan that makes her blush, even though she is of much higher rank than he is.[2] He translated the driver’s city information for her and later confronts the driver for wanting to increase the price and split the earnings with him. She treated him as a master servant, and instead of being offended he laughed. She gave him a ruby mark out of gratitude and asked him to wait for her.[2] He later convinces her to try one more time to become Jasnah's ward and helped her find a bookstore and a good price for the books. She pays him with a portrait of him with the porter. By the end they do seem to be fond of each other.[1] She kept a sketch of him and his figure was used by her when creating the army to fight Odium; he was displayed with a glowing Shardspear.[12]

This article is still missing information. Please help The Coppermind by expanding it.
Retrieved from "https://coppermind.net/wiki/Yalb?&oldid=162855"
Categories: