The Wind's Pleasure is a ship on Roshar captained by Tozbek.[1]

It is a narrow, single-masted cargo vessel with an 8-person crew and at least 2 cabins. The captain's cabin has a faulty latch on the door.[2] 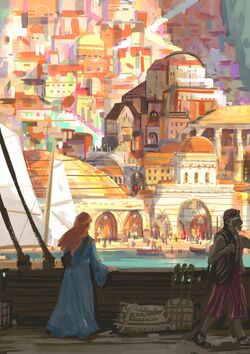 by Marie Seeberger
The Wind's Pleasure arriving in Kharbranth

The Wind's Pleasure was chartered by Shallan Davar in 1173 to take her to Dumadari to meet Jasnah Kholin.[2] Captain Tozbek noted that he was indebted to House Davar and was happy to have Shallan on board. Upon finding that Jasnah was no longer in Dumadari, Shallan asked Tozbek to continue on to the next city. This pattern repeated as Jasnah moved along the coastline doing research. When the Wind's Pleasure finally caught up to Jasnah in Kharbranth and Shallan was taken as Jasnah's ward, Captain Tozbek continued on, trading in other ports. Shallan later sent a note to Tozbek inquiring as to his whereabouts, which he took as a request to pick her up and take her back to Jah Keved. Shallan also acted as a scribe for Tozbek to offset the cost of her travels.[3] 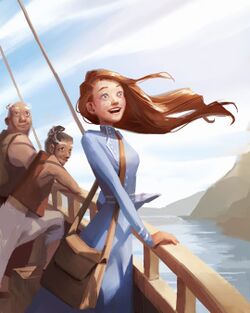 by Jessica Liu
Shallan Davar aboard the Wind's Pleasure

Shortly before reaching the Shallow Crypts, the new member of the crew assisted in an armed takeover of the Wind's Pleasure.[6] The attackers sought to murder Jasnah Kholin and retrieve her research; Jasnah correctly deduced that the Ghostbloods were behind this plot.[7][8] Shallan hid during the assault and unconsciously used her Lightweaving abilities to escape detection.[6] With Pattern's assistance, she then entered Shadesmar and saw that the crew was being methodically executed. Using her latent Soulcasting ability, she convinced the Wind's Pleasure to change so that the crew might have a chance to survive. The Wind's Pleasure changed into a new form, dropping everyone aboard into the water.[6] Shallan woke up in the Physical Realm and believed that the santhid had saved her; neither she nor Pattern knew the fate of the remaining crew members and attackers.[9]

Yalb and two other unknown sailors survived the sinking of the Wind's Pleasure. They struggled to find jobs due to rumors about the mysterious disappearance of their ship. Some sailors believed that the ship had been a ghost ship for years, and that was the reason it eventually vanished without a trace. Because of the rumors, no one was willing to hire the three survivors together, and they each went their own way to serve on different ships.[10]

Shallan later learned that Tyn had masterminded the attack on the ship,[11] in service of Mraize and the Ghostbloods.[7]

Shallan and Jasnah each lost their spanreeds in the sinking of the Wind's Pleasure, which limited their ability to communicate; Jasnah considered the loss a significant setback for her research.[12][13] When Jasnah and Shallan finally met again in Urithiru, Jasnah immediately apologized for the events of the Wind's Pleasure, which she attributed to her own lack of foresight regarding the attack by the Ghostbloods.[8]

Shallan took a liking to Yalb, who often playfully flirted with her. She thought of him when she became upset about the death that seemed to follow her despite her best intentions,[14] and he was one of the first figures that emerged when Shallan used Lightweaving to create an army during the Battle of Thaylen Field.[15] She is presumably unaware that Yalb survived the sinking.

This page is complete!
This page contains all the knowledge we have on the subject at this time.
Big Smooth (talk) 22:21, 13 August 2020 (UTC)
Retrieved from "https://coppermind.net/wiki/?title=Wind%27s_Pleasure&oldid=162856"
Categories: