This page or section needs to be updated with new information for Dawnshard and Rhythm of War!
Be aware that in its current state, it may not include all additional content yet.

“Navani, have you ever wondered why the Almighty gave beards to men, but not women? For that matter, why do we consider it feminine for a woman to have long hair? Should not more hair be a masculine trait? Many of them have quite a lot of it, you see. ”

Rushu is an ardent that works as scholar affiliated with the Kholin princedom.[2] Rushu is interested in the study of handwriting[2] and fabrials,[1] and does research that revolutionizes artifabrians' understanding of how Shardblades function.[3]

Rushu is a very attractive young woman. Like many ardents, she keeps her head shaved.[1] Her face has delicate features, with long lush eyelashes and button-like lips.[1][2]

Rushu is a brilliant scholar,[1] but occasionally somewhat oblivious to her surroundings.[1][2] She does not notice hints or implied commands in others' words,[1] it often requires a direct command and multiple promptings to get her attention and make her realize what she is supposed to do.[1][2] Rushu often gets distracted as well, reading scientific reports when she should be helping with an experiment.[1] She has trouble focusing, often wandering off on tangents and random thought experiments in conversation,[1] or getting very excited.[4] She joined the ardentia to escape the advances of men, but this did not work particularly well, as she still receives attention from many of the male ardents. She is particularly interested in spren research[1] and the study of handwriting, among other things.[2] Rushu is also a courageous person that is willing to risk her safety for her studies, as evidenced by her desire to ride on the fabrial parapet as it ascended.[1]

Rushu is a skilled artifabrian, who devised a hovering seat for Rysn.[5] She is also trained in the use of a Soulcaster, and has one during the expedition to Aimia.[6]

Much about Rushu's early life is unknown, but she joined the ardentia at some point in her past to escape the advances of men, due to her extremely attractive appearance.[1] She became one of the Kholin scholars and worked often with Brightlady Navani Kholin, who became fond of her and developed a high regard for Rushu's intelligence.

Research on the Shattered Plains[edit] 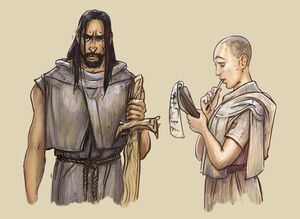 Rushu was summoned after the glyphs counting down to the arrival of the Everstorm were discovered for the first time. Rushu observed that the glyphs were poorly drawn, asymmetrical and uneven, as well as vague in their meaning. She was charged by Navani to make a copy of those glyphs and not to speak of them to anyone, then was sent away so that Navani could speak with Highprince Dalinar Kholin privately.[2]

Rushu was also present at Navani's test of the floating parapet made with the use of reverser fabrials. She was initially distracted, reading about Geranid's experiments with flamespren, but soon focused on the project at hand. Rushu was excited that the parapet seemed to be working, but wished that she could have been on the platform itself to check the gemstones for cracks. Navani sent Rushu to inspect the gems with the other ardents, so that she could speak to her nephew Brightlord Adolin Kholin privately.[1]

Rushu also later questioned why Shardblades could be summoned or dismissed even if the gemstone on their hilt had gone dun. She spent several weeks in contact with the ardents in Kharbranth via one of the Tashikki relay stations to do some research in the Palanaeum on the subject. They reported to Rushu that they had found accounts that the Blades initially were not able to be summoned or dismissed until ornamental gemstones were added to their hilts. They also found stories of the hilts actually changing shape to accept the gemstones. This knowledge that Rushu provided was a breakthrough for artifabrians, helping them to realize that the only function of the gemstone was to aid in bonding the Blade; therefore, it was not part of a fabrial that made the sword supernaturally light and sharp.[3]

Shortly after arriving in Urithiru, Rushu assisted Adolin Kholin in directing workers to unload their wagons at the right place in the massive city according to Navani's layout.[7]

When Dalinar and Navani considered getting married, Navani asked several ardents, including Rushu, to marry them. However, like all of the other ardents, Rushu turned them down, as Vorinism considered them siblings by way of Navani's marriage to Gavilar Kholin; she even squeaked and literally ran away.[8]

Later, Rushu joined King Elhokar Kholin, Dalinar, and Navani on a trip to the Alethi warcamps on the Shattered Plains. They traveled to the Shattered Plains via the Oathgate, and then were flown to the warcamps by Kaladin and his Windrunners, which Rushu found exhilarating. Once they arrived, she discussed sketches for a flying ship with Navani and commented that the math wasn't right, though she had trouble focusing, as she was still excited about the experience of flying.[4]

Navani selected Rushu to join Rysn's expedition to Akinah. She got secret details on the mission and briefed Lopen, Huio, and Cord when they joined.[9] A few weeks into the voyage, Rushu started experimenting with her fabrials. In the meantime, she reprimanded Lopen for making inappropriate jokes near Rysn. Using a pair of silvery hoops with ruby, she explained conjoining fabrials that move in opposite directions to Rysn. They discussed why spanreeds didn't work on a ship while those other fabrials did, an answer that was based on perception. Rushu proposed to Rysn that she could make Rysn's seat hover in the air, although she would not be able to move it. When putting the fabrials away, Rysn spotted sheets of aluminum. The ardent explained those could block spanreeds and that Navani wanted her to experiment with them.[10]

When Huio flew to some nearby land to send and receive messages, Rushu gave him some aluminum plates to use in experiments when writing to her on the ship.[11] Later, the expedition camped a night in a small cove. Rushu went to Rysn to experiment with her chair, without waiting for Rysn's permission. She explained that when Huio was playing with her spanreeds he had made an important discovery: if aluminum was placed in the spanreed in the right way, only movement along one plane of motion was transferred to the other reed. She demonstrated the effect by making Rysn's chair hover, then pushing the chair around, something thought to be impossible before. At Nikli's suggestion, Rysn asked Rushu to report the discovery back to Urithiru immediately.[12] Later, Rushu and Huio installed a mechanism on Rysn's seat that allowed her to hover and rotate her seat.[5]

When the expedition reached Aimia, Rushu joined Huio and Lopen in a boat going to shore.[13] They arrived on a beach full of gemstones. When one of sailors asked if the treasure was cursed, Rushu answered that they were there to loot the place. Rushu made some sketches of the skeletons on the beach before joining Lopen and several guards to move inwards on the island.[14]

“We're here to loot the place, armsman Kstled.... get on with it. I want to sleep in a bed of boundless lucre tonight.”

When they reached the outskirts of the city, Rushu sketched some of the buildings while Lopen flew into the air to look ahead. They moved on and surveyed the city, noting how much it had fallen to rubble. Rushu noted how important this place would be for historians to help understand the past. Lopen asked where to find the Oathgate, and she replied that most were situated to provide easy access for the ruling class. One of the sailors brought a note from Rysn, warning them that something felt off, as it all looked too perfect. She asked Lopen for one of the gemstones from the beach and inspected it with a jeweler's loupe. It was fake. They wondered why someone would set up such an elaborate deception. After a short time they reached the location of the Oathgate, which was very decayed and without a place to put a Shardblade. They concluded that it was fake as well. The ardent asked the sailors to look for stairs or a trapdoor that could lead down. They quickly found it, and Rushu used a Soulcaster given to her by Navani to remove the wall blocking the entrance to the cavern. She remarked that it would have taken an extraordinary effort to hide the Oathgate down in the cavern. Rushu was proud they managed to crack the secret, but Lopen was worried about the response from whoever was watching the place. Lopen left for the beach and told Rushu to gather the sailors and not to get killed.[6]

After the battle against the Sleepless hordelings, they made a few more rounds through the city to sketch it. Lopen was talking to some rocks, and the ardent asked him if he could be less weird. They moved to the rowboats to get back to the Wandersail, and Lopen praised Rysn's negotiation skills, saying he couldn't believe they survived. Rushu concurred that there had been something strange about the situation.[15]

This article is still missing information. Please help The Coppermind by expanding it.
This article was complete and reviewed prior to Rhythm of War, but now needs to be updated.
Retrieved from "https://coppermind.net/wiki/Rushu?&oldid=152860"
Categories: