The Thaylen Gemstone Reserve is the national bank of Thaylenah located in Thaylen City just outside the Ancient Ward by the wall. The Reserve acts as a protector of wealth so that gemstones do not need to be moved from one location to the next thus exposing them to the risk of theft. Many of the gems never leave the vault and are left uncharged.[1]

While the whole structure of the Gemstone Reserve is unknown, Rysn is working there taking care of Queen Fen's personal finances, and that position comes with an office in the Gemstone reserve. Part of her duties involve keeping the Queen's personal vault. [1] 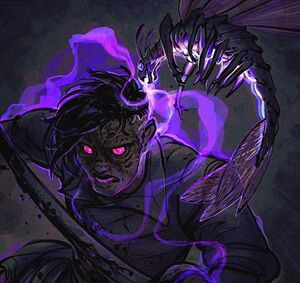 The Reserve has several vaults each with greater and greater levels of security. The inner vaults contain many large gems that are never removed from within the vault. Each of these gems have individual ID numbers placed under them for identification purposes. Inside of this vault is Queen Fen's personal vault.

Notable gemstones include the King's Drop, a large ruby that has stayed infused with Stormlight for centuries, as well as the Benval Diamond, once owned by Vstim.[1]

Before the battle began the reserve was attacked by a single Fused using the Surge of Illumination. The Fused having taken the form of one of the guards joined the inspection of the vaults and upon finding the King's Drop attacked and attempted to steal the gem.[1] After the Failed theft Odium sent a Thunderclast into the city and it destroyed the Gemstone reserve in an attempt to locate the King's Drop, scattering the contents of the reserve across the city.[2]

This article is still missing information. Please help The Coppermind by expanding it.
Retrieved from "https://coppermind.net/wiki/?title=Thaylen_Gemstone_Reserve&oldid=159798"
Categories: