As a peakspren, Ua'pam has the appearance of a featureless humanoid rock in the Physical Realm; he can change his size, and can sometimes be as small as a pebble. He can disappear into stone and emerge from it later.[2]

In Shadesmar, Ua'pam resembles a tall human made of rock; he is reminiscent of a mountain. He is bald and has human features. His skin has cracks that glow from within as if molten, although it is not actually hot to the touch. He wears fur-lined clothing.[1]

Ua'pam doesn't speak much, and he has a "grinding" voice.[1] He sometimes audibly rubs his knuckles together, but the meaning of the gesture is unknown.[3] He is serious and cautious, although he prefers to confront problems rather than run from them.[4][5] He considers Kasiden peakspren from the east to be fools.[1] 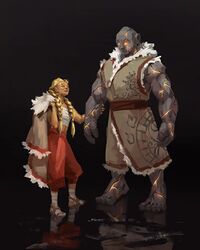 by Jessica Liu
With Zu, in Shadesmar

Ua'pam shares a Nahel bond with Zu, granting him sapience in the Physical Realm. Zu is able to manifest Ua'pam as a Shardblade; she prefers a very long, thin, curved Blade, but she actively changes its shape as needed.[6]

Ua'pam is able to manifest objects in Shadesmar. He has the rare ability to sense the soul of an object, although he can only get a somewhat indistinct perception of its nature. To manifest the object in the Cognitive Realm, he takes the corresponding bead in Shadesmar and uses inhaled Stormlight to make it reflect its physical nature; doing so seems to be physically taxing. When the object appears in the Cognitive Realm, he can sometimes be surprised by its particular characteristics. Ua'pam is particularly skilled with this process, more so than his cousin Unativi. His manifestations can last a long time, even without any reinfusion of Stormlight.[5]

He is also familiar with mandra-powered transportation in Shadesmar, and knows how to help Unativi prepare his barge for flight.[1] He has a relatively high level of familiarity with the geography of Shadesmar, including some caravan routes.[3][7]

Ua'pam bonded Zu circa 1173;[6] he joined the fight with the Radiants because Odium was coming and he did not want to run.[5] Zu's newfound powers led to her exile from Iri, as it was not widely known at the time that Surgebinding had returned.[6] He presumably accompanied Zu during her time in the Reshi Isles over the next few years.[1]

In 1175, Ua'pam and Zu were selected by the coalition of monarchs to join the diplomatic mission from Urithiru to the honorspren stronghold of Lasting Integrity. The team entered Shadesmar through an Oathgate, and it was the first time Zu saw Ua'pam's form in the Cognitive Realm.[1] Ua'pam's was happy to see his cousin Unativi, who captained the barge that the group took from Nohadon's Stairways to Nameless.[5] Notably, Ua'pam and Unativi did not agree on the best course of action for their people in the face of the True Desolation, demonstrating that spren did not act as a monolith.[5]

Ua'pam participated in scouting activities with Zu, and helped find places to camp during the journey.[3][8] He discouraged Zu from confronting the Tukari caravan and their leader.[8] Upon reaching Lasting Integrity, Zu was part of the group that was sent back to Urithiru to bring word to Dalinar, and Ua'pam presumably went with her.[9]

He has a strong, playful relationship with Zu. She shows affection towards him, and enjoys antagonizing him by ignoring his admonitions to be more careful.[1][10]

During the expedition to Lasting Integrity, Ua'pam befriended Adolin Kholin. Although he was surprised by Mayalaran's ability to perform katas, he refused to believe that she was regaining her mind, insisting that it was impossible.[3] He later told Adolin about the beautiful views from one of the caravan routes, and advised him of a spot where starspren are visible.[7]