Shallan's mother is a Veden lighteyes on Roshar and a member of House Davar.

Shallan believes that her mother was brave.[4] For unknown reasons, she was willing to kill her own daughter because of her Surgebinding abilities.[3] 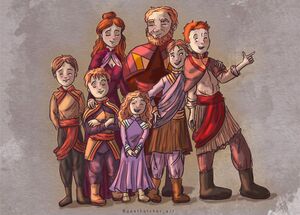 by zoethatcher art
With her husband and five children

She was the first wife of Lin Davar, and birthed Helaran, Balat, twins Jushu and Wikim, and Shallan.

After Shallan began manifesting Surgebinding abilities at the age of eleven,[1] her mother and an associate attempted to kill Shallan.[fn 1] They arrived at the Davar estate and argued with Lin, and Shallan's mother referred to her as "one of them". Lin and the associate scuffled; Lin injured the man with a knife that Shallan's mother then grabbed as the two men grappled.[3] She attacked Shallan, but Shallan's bonded Cryptic, Testament,[2] manifested as a Shardblade that Shallan used in self-defense to kill her mother.[3]

Lin, who had witnessed what happened, locked the Blade in a box[3] and Shallan later abandoned her spren.[2] Lin spread rumors that he had killed his wife and her lover in a jealous rage. Keeping the secret of these events in order to protect Shallan presumably contributed to Lin's dangerous instability and the eventual fall of House Davar.[3] The Davar children also developed mental health issues related to their mother's death and their father's subsequent rage, including Balat's fascination with death[4] and Jushu's gambling addiction.[6] In particular, Shallan's mental health was strongly affected by the guilt of killing her mother, leading to the suppression of many of her childhood memories.[7][2] When she met Hoid at the Middlefest Fair in 1170, she allowed herself to briefly picture her life if her mother had still been alive, remembering her mother's voice and believing that she would have taught her philosophy and drawing.[4]

This article is still missing information. Please help The Coppermind by expanding it.
Retrieved from "https://coppermind.net/wiki/?title=Shallan%27s_mother&oldid=163413"
Categories: