Balat Davar is a lighteyed Veden on Roshar.[2] He is the second oldest child of Lin Davar and his mother and one of Shallan Davar's older brothers. As the second heir in the line of House Davar, he is originally known as Tet Balat Davar. He becomes known as Nan Balat Davar after his father disowns his older brother Helaran and strips him of his position as first son and heir.[3] He is married to Eylita Tavinar.[1] He is a guardsman in Urithiru. He is friends with Mraize, though only knows him as a guardsman named Gobby.[1] 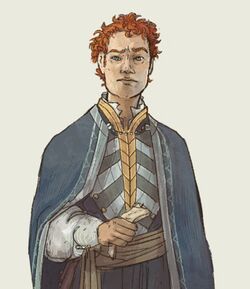 Balat is a young man, twenty-three years old as of 1173. He has a round face and a haunted look. He is the tallest among his surviving siblings.[4] Balat walks with a cane and suffers from pain in his bad leg[2] from an injury caused by his father smashing his leg with a poker.[5]

It is implied that as a boy, Balat liked starting fires, one of which almost burned down the servants' building.[6] He also had a habit of cruelty towards animals.[7] As an adult, he still likes killing animals, though never people; the pain of whatever he kills seems to lessen his own pain. He does so cruelly, for example ripping the legs off of a cremling one by one.[2] This interest in death is magically enhanced.[8]

He is close to and fond of Scrak, his pet axehound.[2]

Balat believes that House Davar is deeply damaged and a "family of cripples" as a result of the death of his mother and the following events. He sees himself as the only one who is normal and unscathed by these events.[2]

Balat has no magical ability and no particular strength in politics, finance, social skills, or dueling.[4] His animal cruelty is magically enhanced by a moving force on Roshar.[8]

Because Balat was born the second son of Lin Davar, he grows up known as Tet Balat. He grows up bitter towards his father, believing that he had killed Balat's mother and her lover.[9] He relieved his anger by torturing animals; it's likely he abused an axehound pup that his older brother Helaran gave him as a gift.[7]

Nan Helaran confronted Lin Davar, and left the house. Though there was no immediate change for Balat or his brothers, they seemed to constantly grieve his absence, and no one else dared to openly challenge Lin. When asked for evidence against Lin by a representative of the highprince, Balat wanted his father to be taken but did not dare speak.[9]

At one of his father's feasts, Balat met Eylita Tavinar, the daughter of a Brightlord of lower dahn than his father.[10] With the help of Shallan, they started writing and later dating.[3]

Several years later, due to Helaran and Lin growing further apart, Lin started calling Balat "Nan Balat," as if he were the eldest son of the family. When Lin received a threatening message from Helaran at Middlefest Fair, he officially disinherited Helaran and changed the title of Tet Balat to Nan Balat.[3]

The first time Balat confronted his father was when Lin decided to forbid Balat's engagement with Eylita, whom he disapproved of because of her lower station. Lin Balat preferred that Balat marry the Highprince's daughter, who was in her fifties. Balat mentioned to his father that he saw Helaran, which made Lin even more angry. As punishment, Lin sent a servant to kill Balat's beloved axehound pups.[11]

Looking at his dead pups, Balat confirmed to himself that he was not as strong as Helaran and wasn't capable of taking care of his family. Shallan helped him make a plan to escape with Eylita with Helaran's help, under the condition that they take their stepmother Malise Gevelmar with them.[12] When they couldn't contact Helaran, Balat decided to only take Eylita and go to the Highprince to testify against his father for his mother's death. Though his father had gained much more power and the accusation might not be as well received, Balat decided that he had to take the risk, as he couldn't be a coward anymore.[5]

On the day Balat was to go to the Highprince, Malise revealed Balat's plan and was beaten and killed by Lin. Lin summoned Eylita before she and Balat could escape, and he sent a guard to kill Helaran.[5]

When Balat found out that his father had called for Eylita, he confronted him again. This time, however, his father was cold and aggressive. The confrontation turned to violence. Balat was not skillful enough to hurt Lin, but he broke his father's hidden Soulcaster. Lin injured Balat's leg, but before he could hurt him further, he was tricked into drinking poisoned wine by Shallan, paralyzed, and strangled with her necklace.[5]

Nan Balat ran the affairs of House Davar in Lin's place while Shallan pursued Jasnah Kholin for a wardship. He communicated with Shallan via Spanreed. They barely managed economically, and they knew someone would discover their father's death before long. Some men visited Balat and demanded the return of his father's Soulcaster.[13]

Jasnah at first stepped in to help House Davar,[14] but everything was lost during the upheaval in Jah Keved. By the order of Mraize, Balat and his brothers were saved and taken to Urithiru as a "gift" to Shallan for her services to the Ghostbloods.[4] 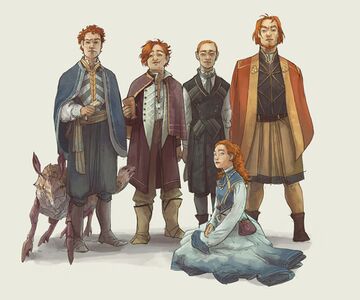 by Marie Seeberger
With his siblings and Scrak

In the past, Balat resented Shallan for being untouched by the brutality of his father, but he also knew he couldn’t truly hate her. He considered her shy, quiet and delicate.[2] Shallan tries to help Balat, along with the rest of her brothers. She helps him get closer to Eylita[3] and later encourages him to plan an escape with her.[11] She potentially saves his life by stopping their father.[5] After Shallan leaves, they keep in touch via spanreed. Balat and his other brothers are used by Mraize to keep Shallan on his side.[15]

Though Balat seems to care for his brothers, he doesn’t step up to protect or help them. This is shown when Jushu is taken by debtors. However, Balat gives Shallan his knife to help get Jushu back.[16]

When Helaran leaves the house the first time, he doesn't think Balat is ready to lead their brothers.[7] However, several years later, before leaving for the war in Alethkar, Helaran asks Balat to watch over the family. Balat considers Helaran to be strong and brave and doesn't consider himself to be as good.[11]

Balat is sure his father killed his mother and her lover. He resents his father's cruelty, to the point where he wishes for the Highprince to take him.[9] Balat is always afraid of stepping up to him. It is only Lin's disapproval of Eylita that pushes Balat to confront him. Lin cripples Balat with a poker.[5]

This article is still missing information. Please help The Coppermind by expanding it.
Retrieved from "https://coppermind.net/wiki/?title=Balat_Davar&oldid=158181"
Categories: