“Squint your eyes a little, and everything is really just color and shapes. ”

Stargyle is a Lightweaver of the Unseen Court on Roshar.[2]

Stargyle is tall, friendly, and handsome with a ready smile.[2][1] He has the build of a soldier, although he refuses to wear a soldier's uniform anymore.[1] 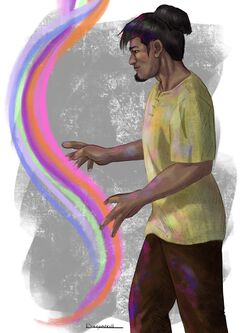 Stargyle is a Lightweaver, bonded to an unknown cryptic. This grants him access to the surges of Illumination and Transformation. He is particularly skilled at seeing into Shadesmar.[2] When he creates illusions, his method of focus is to act as if he were painting.[1]

Stargyle was born to a pigmenter, so he grew up viewing the world through its colors. He likely was born with a different name and took the name of Stargyle later.[1] At some point he served as a soldier, married, and found his way to Urithiru.[3][1]

Shallan recruited Stargyle into her group of Lightweavers, which she began calling the Unseen Court. As he was one of the newest recruits, and therefore least known to her, she asked him to accompany the diplomatic mission to Lasting Integrity.[2] At the last minute, however, his wife fell ill and he had to back out of the trip. Beryl instead asked to accompany the envoy to the honorspren.[3]

Stargyle ended up accompanying the coalition's force that recaptured Emul. When Dalinar determined that the best way for him to learn to use his Bondsmith abilities was to speak to Ishar, Sigzil took Stargyle and a couple of Windrunners to scout out the situation in Tukar. On their return, Stargyle was able to create an illusion for Dalinar that played out a depiction of what the group saw as they flew over Ishar's army.[1]

This page is probably complete!
This page contains most of the knowledge we have on the subject at this time.
It has yet to be reviewed.
Retrieved from "https://coppermind.net/wiki/Stargyle?&oldid=161105"
Categories: