“I want to help! I want to do something other than stand around, waiting for the enemy to come to us! ”

—Lyn on why she wants to become a Windrunner[2]

Lyn is an Alethi scout and, later, a Windrunner on Roshar.[2] 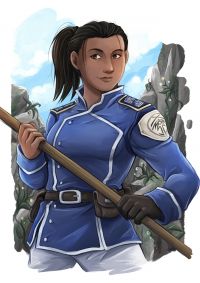 Lyn is a short, "solid-looking" darkeyed Alethi woman with long black hair, which she wears in a ponytail or a braid.[3][4][5] She's usually dressed in the blue Kholin uniform.[6]

She's interested in pursuing the masculine arts, and dislikes being treated as incapable of fighting just because she's a woman. She's disappointed when Shallan informs her that a Radiant can be feminine, and when Kaladin suggests that Lyn can serve as a secretary, she's furious with him.[7][6] She's impatient and eager, and wants to take the fight to the enemy rather than wait for it to come to her.[6][2] She's also good at making friends, sliding into the Bridge Four group without any problems, and appreciates good art.[8][7] She can keep a cool head in stressful situations, and take charge when necessary.[4][9]

“I could [stab Amaram a little]. I've only started training with a spear. We could claim it was an accident. ”

—Lyn on her own combat ability[8]

Lyn is a Windrunner, allowing her to heal herself with stormlight, as well as use the Surges of Gravitation and Adhesion.[1] While she's not shown using the latter, she is capable of flying by the time of the Battle of Thaylen Field.[10] As a scout, she was armed with a knife, and presumably knew how to use it.[11] After joining Bridge Four, she begins to use a spear, although she's still, by her own admission, only a beginner.[8] She's also capable of drawing what she'd scouted from memory, although her artwork prioritizes speed over quality.[3] 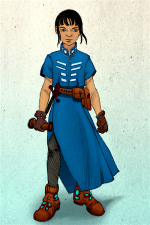 Lyn was one of the scouts who accompanied Dalinar Kholin's expedition into the center of the Shattered Plains. She, along with Shim and Felt, aided Shallan with mapping out the central plateaus during the Battle of Narak, providing illustrations.[3]

Following the Alethi moving to Urithiru, Lyn started working as a messenger. She was the one to report the murder of Vedekar Perel to Dalinar, as well as the one to fetch him when Bridge Four found Oathbringer.[7][12] At the same time, she began to hang out around Bridge Four, even going with them to investigate what turned out to be Re-Shephir. There, Lyn was the first to notice Midnight Essence. During the ensuing battle, she provided first aid to the wounded.[4] 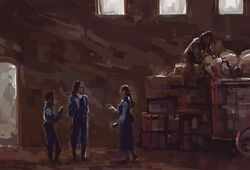 by Marie Seeberger
Asking Kaladin if she can join the Windrunners

When Kaladin returned and Bridge Four began to recruit squires, Lyn attempted to join. Kaladin initially thought she wanted to be a scribe, but after the situation was cleared up, he allowed her and four other scout women to join.[6] Lyn initially had problems breathing in stormlight, but with Skar's help, managed to do so, becoming a proper squire.[2] Eventually, the rest of her squad joined her.[13]

From then on, Lyn easily slid into Bridge Four's structure, becoming fast friend with other members. Shortly before the Battle of Thaylen Field, she was on good enough terms to know their history with Amaram, even suggesting that she could "stab him a little" for them.[8] When Jezrien's Honorblade was stolen, she was present, and ordered another scout to fetch Renarin to help with Rock's wounds.[9]

After Teft managed to swear his Third Ideal, Lyn came to Thaylen City along with the rest of Bridge Four, carrying Rock until he was close enough to Kaladin to start healing himself with Stormlight. Afterwards, she participated in the fighting.[10] She survived the battle, and was last seen listening to Lopen's story of how he lost his arm.[14]

Lyn was on one of the missions initially sent to Akinah to scout prior to Rysn's expedition. Although this expedition was a failure, she and Sigzil rescued Leyten after his Stormlight was sucked away by a Sleepless.[1] She swore her third ideal and is now a full Windrunner. [15]

She was part of the team that went back to Hearthstone and rescue its people including Kaladin’s family.[16]

Lyn left with Dalinar to fight the Emul campaign. There she led scouting to Urithiru. She talked to the soldier that was sent by the Fused pretending to be from the queen, who used the correct passwords and had the correct language. Urithiru’s soldiers had to hike for hours to meet them and the scouts were only able to see through spyglasses and saw what they thought were Windrunners flying over the tower trying to ask for patience.[17]

She did try to approach the tower herself, but due to Urithiru’s barrier she fell unconscious. The tower’s soldier dragged back her to the others.[17]

Lyn is one of the most trusted Windrunners, this is proven by the fact that she was given the responsibility of lashing Dalinar to meet the Herald Ishar.[18] Later, she was part of the five windunners that fought the Herald who easily disabled them by only defending himself.[19]

Lyn also participated on the scouting team that came back after Ishar and his army left to the cognitive realm. There she found a killed cultivationspren, along with the other killed spren found by the other members of team.[19]

Kaladin was able to understand that Lyn had been running messages to Bridge Four because she wanted to be part of the team, however he assumed she would be a scribe and offered her that role. She spoke her mind and was then invited by him to join the tryouts.[6]

“Their relationship hadn’t been right. He knew that as well as she did, and the pain he felt wasn’t for the end of that. Not specifically. ”

—Kaladin to himself on breaking up with Lyn.[16]

Adolin and Syl conspired on getting Kaladin to date Lyn. Though the relationship hadn’t worked out, they’d both grown because of it. They went together to Skar’s wedding shortly before they broke up.[20] She still cared about him and showed she had genuine concern.[16]

This page is probably complete!
This page contains most of the knowledge we have on the subject at this time.
It has yet to be reviewed.
Retrieved from "https://coppermind.net/wiki/Lyn?&oldid=156249"
Categories: