Felt is a Scadrian worldhopper.[3] He is on Scadrial during the end of the Final Empire, and on Roshar during the War of Reckoning and the True Desolation.[2][3]

Felt has pale skin, a hawkish face, and a drooping mustache.[4][1] He is considered a short man even on his native Scadrial;[4] on Roshar, where people are naturally taller,[5] he is diminutive.[1] As a Scadrian, Felt's eyes are not shaped like those of eastern Rosharans, and are closer to the round eyes of the Shin.[1] Alethi people consider him darkeyed, and think that he looks "foreign".[6] He inherits a distinctive floppy brown hat when Bashin retires, and he often wears it as a memento.[7]

He is reliable, logical, and resourceful, and he provides a stable presence during missions.[4][7] He is also thoughtful and observant, making him a very good spy.[8][4] His competence and agreeable personality allow him a bit more liberty than other soldiers with regard to some rules and regulations.[7] Unlike many prominent nobles, Felt has a solid work ethic.[9] He appears to be loyal to the lords that he serves, and enjoys taking on any tasks that he is assigned.[4]

Felt is a worldhopper, and has been a member of various groups over the years.[10] His motivations and allegiances have shifted at different points of his life, and he has sometimes been a "rogue agent" in the cosmere.[11] He has been cosmere-aware since his time on Scadrial, and was aware of interplanetary trade that occurred in the Pits of Hathsin, though he was not necessarily directly involved.[12][13][10] He is not known to have revealed his abilities or cosmere knowledge to anyone on either Scadrial or Roshar.

He is noticeably lithe and nimble.[8][1] By the time of the True Desolation, he is an older man;[6] he is not quite as spry as he was in his youth, although he retains enough agility to climb outcroppings and perform other scouting duties without issue.[7] He is also trained as a military scout;[6] he is capable of surviving outdoors and leading groups of soldiers.[1] His skills and his experiences as a worldhopper likely contribute to his uncanny knack for traveling through unknown places.[7]

Felt was born the third son of a minor nobleman during the Final Empire not long before its fall, and was used to working for a living.[9][13]

He was one of the main spies for House Venture. He worked for Straff Venture before he fled Luthadel, and he subsequently worked for Elend.[9] He spied on Kelsier's crew's hideout and reported to Elend that they were a well-funded, competent skaa thieving crew.[8] His information caused Elend to realize that Valette Renoux was not what she seemed.[8]

During the Siege of Luthadel, Felt was tasked with figuring out how the city was being infiltrated by someone who was poisoning food. He interrogated the refugees entering the city and the people running the Luthadel passwalls, but did not get very far. On a hunch, he had his men search the river and determined that someone had pried some drain grates free to create their own entrance into the city. Elend was pleased with Felt's competence and noticed that he took pleasure in his work. He resolved to utilize Felt's skills more often, including a possible assignment to find a kandra spy.[4]

Elend later noted that Felt was assigned to watch the Lord Ruler's storage cavern in the east during the Siege of Fadrex City.[14] 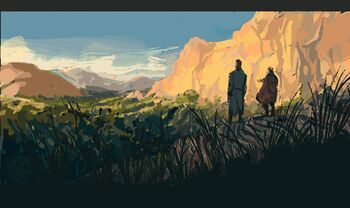 by Marie Seeberger
Felt leading Dalinar to the Valley

Felt was with Dalinar when he visited the Nightwatcher not long after the assassination of Gavilar. Dalinar trusted him, as Felt was one of only a few people that knew of the visit. Felt seemed to have some insight into the effects of the Nightwatcher, and cautioned Dalinar about visiting her. Felt had visited the Nightwatcher prior to his trip with Dalinar, but she did not show herself; he believed that this was because she did not like foreigners, especially someone as "foreign" as he was. He also chuckled at Dalinar's lack of knowledge regarding birds (or "chickens", as Dalinar called them). Felt was the first person to say Evi's name to Dalinar after Cultivation's Old Magic took effect.[1]

He took part in the War of Reckoning, acting as an Alethi scout on the Shattered Plains who reported to Lyn during the Battle of Narak. He and Shim were sent to scout the plateaus surrounding Narak prior to the battle.[15]

Felt remained loyal to House Kholin during the True Desolation, and was chosen to accompany Adolin and Shallan on their journey through Shadesmar to Lasting Integrity. Adolin considered Felt's even temperament and scouting skills invaluable.[6] Felt monitored the movements of a group of Tukari that were following the expedition, reporting on them to Adolin. He was surprised to see the intelligence exhibited by Gallant when Adolin needed assistance.[7] When Adolin was put on trial, Felt did not return to Urithiru, instead staying in a camp near Lasting Integrity as part of Adolin's small support team.[16]

Felt's wife Malli has been present with him during several important events, including his visit to the Valley with Dalinar and the expedition to Lasting Integrity. Malli is able to use a spanreed and write in women's script, and can fulfill the role of a scribe on Felt's missions.[1][6] Felt and Malli have only been seen together on Roshar, and it is not known if she is a worldhopper or if she is even aware of Felt's abilities.

Despite the fact that Felt originally worked for his father, Elend respects him and his opinions.[8] Because of the existence of kandra on Scadrial, it is difficult for Elend to fully trust anyone, but he has a very high level of confidence in Felt and gives him several important tasks.[4][14]

It is not clear how Felt came to know Dalinar, but by 1168, he was one of the Blackthorn's most trusted associates. Like Elend, Dalinar respects Felt and seeks his counsel despite Felt's relatively low social status.[1] Felt's skillset and personality have kept him close to Dalinar and his family, and he is considered a friend rather than just a subordinate. Adolin respects Felt in the same way that his father does.[6]

This page is complete!
This page contains all the knowledge we have on the subject at this time.
Big Smooth (talk) 19:47, 13 April 2021 (UTC)
Retrieved from "https://coppermind.net/wiki/Felt?&oldid=165010"
Categories: