“Enjoy the moment. Close your eyes and contemplate what the One has given you. Seek the peace of oblivion, and bask in the joy of your own sensation. ”

Evi Kholin is Dalinar Kholin's first wife, and the mother of Adolin and Renarin.[4] “Must everything be fighting to you? ”

Evi is exceptionally tall, almost as tall as an Alethi. She is willowy and somewhat frail, with a small chest.[1] Her hair is pale blonde and her skin is light golden,[3] though neither are true Iriali gold,[5] and she has matching light yellow eyes.[6]

Evi is a calm woman, often shying away from conflict. She is a dedicated pacifist and often tries to convince her husband to behave more peacefully and reject the warlike ways of his kinsmen.[7] She enjoys the moments of calm between the two of them, and could be truly happy then.[3] Though peaceful, Evi is dedicated to her convictions. Even shortly before the end of her life, she tries to convince Dalinar that violence doesn't always need to be the answer.[8]

Evi's time among the Alethi has caused her to be jaded and critical. The contest of wittiness between the women makes her feel stupid; she critiques the Alethi's supposed piety, noting that they are only ever devout when it suits their desire to wage war. She tries to assimilate into the Vorin culture with mixed results, but does not let herself forget her origin.[9] After her death, Navani would claim that everyone loved her, but Evi's own experiences run contrary to that observation.[10][9]

Although she and Dalinar are poorly matched, she nonetheless strives to make their relationship work. She refuses to let her frustration with Dalinar's darker nature show to her children, having told them that their father is an excellent man and officer.[11] Eventually, she comes to truly care for him, although she is keenly aware that he does not reciprocate her feelings to the same extent.[12] Adolin likely inherited his emotional sensibility from her.[13]

She is a devout follower of Iri religion and believes in the One. Though she absorbs many Vorin customs upon her marriage, including the worship of the Heralds, she continues to treat the One as the highest deity.[7] She also respects the Nightwatcher as an aspect of the One and believes he can be contacted through dealings with the Nightwatcher.[3]

Evi is a fluent speaker of the Alethi language, although she has a habit of literally translating her native idioms into Alethi, sometimes resulting in a loss of their context.[3] She may be naturally left-handed, and likely re-trained herself to use her right hand upon marrying Dalinar.[1] She has some measure of artistic skill, having created the sketches of Adolin's Shardplate for the royal record.[14]

Said Shardplate was originally hers; it is the reason why Dalinar marries her in the first place.[7] The queen of Iri claims that the set belongs to her, although her claim appears weak, as she and Evi aren't related.[4] 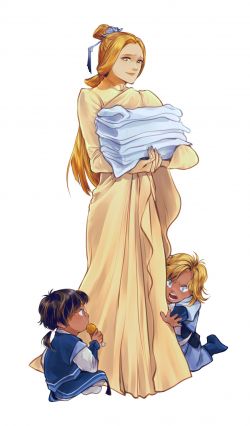 by botanicaxu
Evi with baby Adolin and Renarin

Evi was born in Rira sometime around the year 1124.[1] She grew up there with her brother, Toh. At some point, possibly at birth, she was given a set of Shardplate, although she would never use it herself.[7]

When she was roughly nineteen years old, Evi and Toh fled Rira to Alethkar and pursued an alliance with the Alethi, offering a set of Shardplate in exchange for their protection from their own people. It was Torol Sadeas who suggested that Dalinar marry Evi; Dalinar agreed, knowing that Navani was now beyond his reach.[1] The two were betrothed soon thereafter, but only formally married three years later, as Evi's culture required prolonged courtship. However, she accompanied him to his military campaigns throughout her betrothal. Even then, she would often plead with Dalinar to be more peaceful.[15][7]

By the year 1150, Evi and Dalinar were no longer at war, but rather at their home in Kholin lands. It was in 1150 that she gave birth to her first son, Adolin.[16] Shortly thereafter, Dalinar would depart for the border wars with Herdaz and Jah Keved, leaving Evi to raise the boy on her own for the next five years. Dalinar would visit several times; it was after one of those visits that Evi gave birth to another child. As Dalinar didn't answer her letters asking for a name, she eventually called the boy Renarin, composing his name in an attempt to mimic Alethi patterns. Her intent was for it to mean "Re, born unto Nar" (as in Dalinar), although it came out as "one who is born unto himself".[17] Evi told Renarin the myth of Parasaphi and Nadris when he was young.[18]

“No one actually cares about religion here. Oh, they make sure to point out how superior their beliefs are to mine. But who actually ever worries about the Heralds, other than to swear by their names? You bring ardents to battle merely to Soulcast rocks into grain. That way, you don't have to stop killing each other long enough to find something to eat. ”

—Evi's frustration with the Alethi[9] When Adolin was five years old, Evi decided to join Dalinar on his campaigns. This was motivated by several factors, chief among them the fact that all other Alethi wives joined their husbands on the campaign trail, and that Dalinar spent too little time with his children. Although he tried to convince her that the battlefield was no place for her, she insisted on staying.[17] From then on out, she would spend half of every year with Dalinar -- and, later, Adolin -- in his war camps, and the other half in Kholinar with Renarin, who was too sickly to take on the road. Her Riran accent began to fade at the time, though she would sometimes switch back to her native language.[9]

Although outwardly it appeared that she and Dalinar were a loving couple, by 1163 the two of them were more at odds than ever. Evi wanted the killing to end, and for the family to return to Alethkar and rest; Dalinar sought to continue making war. This culminated in a major fight between them, which ended with Evi breaking into tears. In an attempt to console her, Dalinar promised that after quelling the new rebellion in Rathalas, they would return to Kholinar for at least a year.[9] Moreover, to respect her wishes to be more peaceful, he initially tried bargaining with Tanalan.[8]

Unfortunately, this was not to be. Tanalan betrayed Dalinar, attempting to kill him after sending him out to investigate rumors of a highprince that had betrayed Gavilar. When Dalinar returned after digging himself out of a deep pile of rubble, Evi was already beginning to mourn him and grew even more distressed when he began his plan to take revenge, leading to him ordering his men to escort her out of the command tent to somewhere safe.[12] Unbeknownst to him, she snuck out and went to the city to plead with Tanalan for peace. The young highprince detained her in his former safehouse, now turned city prison. When Dalinar set flame to the Rift, Evi died in the flames, with Dalinar finding out far too late to even attempt saving her.[2]

“Evi… He had never deserved her. ” Evi's body was recovered from the ruins to be given a proper burial. Dalinar created a story to mitigate everyone's conjectures, claiming that she was kidnapped by Tanalan's men and that the Rift was burned in retribution for this.[2] The story would later change, with Torol Sadeas, who was fighting alongside Dalinar at the time, taking the blame for burning the city.[20] Both Dalinar and Sadeas were publicly censured by King Gavilar for the loss of Rathalas.[21]

Dalinar would later begin to hear the voices of all those he had killed, with Evi being the loudest among them. This drove him to drink heavily, withdrawing from public life.[21] Eventually, he visited the Nightwatcher, following Evi's stories of her, and asked her for forgiveness for his part in Evi's death. As the Nightwatcher was incapable of understanding his request, Cultivation intervened and took away all of Dalinar's memories of his wife.[19]

From then on out, Dalinar remembered nothing of Evi, even her name -- whenever someone else said it, he heard only the rushing of the wind, and sometimes he had trouble remembering that he had ever been married in the first place.[22][23] Those memories began to return shortly after the beginning of the True Desolation.[4] Eventually, Dalinar remembered Rathalas as well, sending him back into a brief stint of alcoholism as Evi's voice returned to haunt him.[24] Odium tried to use this to tempt him into becoming his champion, although Dalinar failed to give in. At that point, he heard a voice that might belong to Evi, telling him that she forgave him. This was the final push he needed to open Honor's Perpendicularity during the Battle of Thaylen Field.[25] After these events, as Dalinar had more and more time to recall his rediscovered memories of his late wife, he realized that he needed the memories and even felt that the memories were "comfortable" to him.[26] He also wrote and eventually began releasing portions of Oathbringer, My Glory and My Shame, including in it an open confession of what he had done; many people were terribly shocked to learn what he had done.[13][27]

Adolin, in contrast, had warm memories of his mother. He got his "western sensibilities", including his penchant for snuggling and his greater than usual emotional intelligence, from her.[13] He also kept a memento of her, her chain, which he considered to be his lucky charm, always making sure to keep it in his pocket for important duels.[28] When he discovered the truth behind the burning of Rathalas, Adolin tried to rationalize his father's actions by attributing them to the influence of the Thrill and to Dalinar being a different man in general at that time. However, he nursed a deep-seated fury towards his father on his mother's behalf despite these attempts.[29]

This article is still missing information. Please help The Coppermind by expanding it.
Retrieved from "https://coppermind.net/wiki/?title=Evi_Kholin&oldid=176605"
Categories: