Herdaz is a kingdom in north-eastern Roshar.[1] The people from Herdaz are called Herdazians, and can be found in many surrounding countries.

Herdaz is a coastal nation in the north-east of Roshar, covering approximately one million square kilometres of land.[2] Most of its jagged coastline lies on the Reshi Sea, while a small part of it faces Steamwater Ocean and the Bay of Elibath. From the south, Herdaz borders Jah Keved on two rivers and Alethkar on land. Across the sea, it is close to a number of Reshi Isles.[1][3]

Most of the country is a series of long and narrow peninsulas jutting out into the sea, and a single larger one separating the island of Akak from the rest of the Reshi archipelago. The Herdazian interior appears to be rather flat, with a single major river dividing the western and eastern halves of the country, and a number of smaller, shorter coastal rivers. Though there are cities there, none of them are of global importance.[1][3]

“Herdaz? My aides say it is the traditional first step for an Alethi aggression. ”

During the Silver Kingdoms era, Herdaz was part of the kingdom of Rishir, which additionally encompassed modern Reshi Isles as well as northern Jah Keved, Alethkar and Tu Bayla.[5] At some point, the people living in this particular region of Rishir intermingled with singers, leading to modern Herdazians having singer ancestry and some of their physical features.[6] It's uncertain when Herdaz became its own country.

Herdaz has a long history of conflict with the Alethi.[4] It was one of the first conquests of the warlord Sadees, though like many others, it did not remain within his sons' grasp after his death.[7] Much later, following Gavilar Kholin's unification of Alethkar, a change of dynasties occured in Herdaz, and the new monarch began threatening the Alethi borders in an attempt to test them.[8] The Alethi responded by sending armies led by the king's brother, Dalinar Kholin, who spent about four years campaigning in the borderlands, shaping the modern Alethkar-Herdaz border.[9]

Prior to the True Desolation, it seems the country wasn't doing very well, as numerous Herdazians elected to leave it, with some only coming back from time to time while others never returned.[10][11] However, it appears to have weathered the Everstorm without much destruction, as the Voidbringers focused on bringing down their neighboring states.[12] When Dalinar contacted them to get their support for his coalition, they initially believed that he was trying to trick them into letting him invade them.[4]

Following the fall of Alethkar, a number of Alethi forces withdrew to Herdaz in an attempt to mount an organized resistance, among them forces led by Sheler and Relis Ruthar.[13][12] While most refugees have been folded under the command of the Herdazian general Dieno enne Calah, the cooperation between the two armies could get heated at times, as brightlord Sheler was captured and put up for execution after assaulting the local women.[14]

Herdaz is ruled by an unnamed king from a new dynasty that has only come into power sometime before the year 1150.[8] Little is known about him and his family, other than that he has no daughters.[11] The kingdom has a single set of Shardblade and Shardplate that are passed down through the royal line.[15]

Herdaz might have at least one Soulcaster, though the source on that is unreliable.[16] It is certain, however, that there are no Oathgates there.[17] 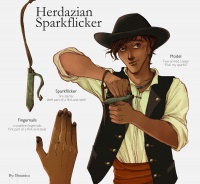 Herdazians are brown-skinned, darker than the Alethi, but paler than the Makabaki, and brown-haired.[18][19] They are most similar in appearance to the Reshi, to the point where they can be mistaken for them.[20] However, they are also one of several races on Roshar with singer blood[21] in their ancestry, though it's not quite as apparent as it is among the Unkalaki.[6] The most visible sign of their heritage are their crystalline, slate-colored fingernails, which are strong enough to start a fire with a proper tool, and are sometimes described as reminiscent of carapace.[22][23][24] Apart from that, they have a higher tendency to be asexual than other races without singer ancestors.[25]

Herdazians are rather tight-knit people. They have large families - a single person can easily be related to half the country - and will stick together, the bonds between them stronger than whatever country they happen to find themselves in.[26][27] Majority of them seem to be Vorin, though they practice their own variety of the faith, one that permits men to write.[28][29]

Herdazian cuisine uses mostly a wide variety of shellfood, as well as flatbread.[30] Chull head is considered a delicacy.[28] The most famous Herdazian dish is chouta, fried Soulcast meat wrapped tightly in flatbread and topped with sauce, though sometimes the meat is replaced with shellfood.[31]

Herdazian language belongs to the Vorin family, much like Alethi and Veden.[32] The language has, according to Lopen, names for all the kinds of cousins. There are numerous words in Herdazian to refer to a person without using their name, all of which have slightly different meaning.

“ Gon, I haven't been to Herdaz since I was a baby. There are as many Herdazians in Alethkar and Jah Keved these days as there are in our homeland. ”

Almost half of all Herdazians on Roshar don't actually live in Herdaz, but rather in the surrounding countries.[11] When a large group of them comes together, they often form their own districts, such as Little Herdaz in highprince Sebarial's warcamp on the Shattered Plains.[26] They bring their culture with them wherever they go - among others, chouta is a Herdazian street food that gained much popularity in the warcamps, and can even be bought in Kholinar.[41][42]

There are numerous stereotypes about Herdazians. Many Alethi believe they all wear sparkflickers, and more malicious ones claim they're all stupid, though both are repeatedly proven wrong.[22][43] Across western Roshar, they are considered extremely boastful, and the women are said to be tough and difficult to impress, even in the opinion of their kinsmen.[44][28] Herdazians are mentioned as looking very similar to one another to non-Herdazians, to the point where they often cannot be told apart.[10]

This article is still missing information. Please help The Coppermind by expanding it.
Retrieved from "https://coppermind.net/wiki/Herdaz?&oldid=164377"
Categories: