Rathalas, also known as the Rift, was a city in in the northern part of the Eastern Crownlands near central Alethkar. The city was burnt to the ground in 1163 and has not since been rebuilt. The people of Rathalas are sometimes referred to as Rifters and have a distinct nasally accent.[1] Rathalas was large enough to house tens of thousands of people.[2]

Rathalas was a tiered city built on struts up the side of chasm walls. It could be accessed from both the plains above and the canyon mouth below the city.[2]

Rathalas is on the eastern shore of the Sea of Spears, and is near the Thanadal and Kholin princedoms.[3] It is situated close to the spren city of Celebrant within the Cognitive Realm.[4] Somewhere to the south-east is the waystop Vedelliar, however it is unknown whether this town is within the Eastern Crownlands or Unclaimed Hills.[5]

The city resided within a deep chasm that narrows at one end and opens onto the Sea of Spears at the other. The canyon that held the city is at least 150 feet deep and V shaped in nature.[1] The area above the canyon is flat and rocky and the city was difficult to spot when approached from above. A wall enclosed the opening to the Rift on all sides except the western.[1]

The riverbed near to the city does not retain water, only filling during storms.[5] This is due to the rockbuds surrounding the riverbed consuming large quantities of water.[5] The rockbuds grow to exceptional sizes with trunks growing as tall as a man's waist and vines as thick as a man's wrist.[5]

Rathalas was besieged by Gavilar Kholin during his campaign to unite the princedoms of Alethkar. During the attack, Dalinar Kholin sought out and killed Brightlord Tanalan, winning himself the Shardblade Oathbringer. Although he had instructions to kill Tanalan's heir, Dalinar spared the boy's life and he and his mother fled.[1]

Years later, Tanalan's son (with whom he shared a name), returned to Rathalas and demanded the return of his father's Blade. The reappearance of Tanalan destabilized the area, leading to the threat of rebellion within the entire region of the Eastern Crownlands.[6] Gavilar attempted to quell the region through political means but was ultimately unsuccessful, due in part to support of the rebellion from at least one of the other highprinces.[7] 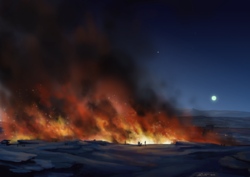 After twelve years of failed negotiations between Gavilar and Tanalan, Dalinar and Sadeas returned to the Rift to end the rebellion. Against his nature but at the behest of his wife, Dalinar offered Tanalan a final chance to submit to the king and save his city. Tanalan seemingly accepted Dalinar's truce, offering him information about the highprince who had supported the rebellion and naming Sadeas as traitor.[5] Dalinar, believing that one of Sadeas' Shardbearers had recently left the city, followed in pursuit only to fall into a trap set by Tanalan, who hoped to separate Dalinar from the Kholin army and kill him.[8] Dalinar returned to Rathalas after the attempt on his life failed and ordered the city razed to the ground and its people slaughtered in order to set an example. During the battle, Tanalan was killed by Dalinar after he watched his family die.[2]

Evi Kholin was killed during the battle after secretly travelling to the city to plead with them to surrender. In order to hide the true nature of her death and as well to justify the destruction of the city, a narrative was constructed that claimed that Evi's assassination prompted the ensuing slaughter.[2]

This article is still missing information. Please help The Coppermind by expanding it.
Retrieved from "https://coppermind.net/wiki/Rathalas?&oldid=162593"
Categories: