“ The Heralds themselves favor you. ”

Toh is a Riran man on Roshar and Evi Kholin's brother. He is Dalinar's brother-in-law and Adolin and Renarin's uncle.[1]

Toh is a tall lighteyed man with golden hair. Like most Rirans, his skin is lighter than a typical Alethi's.[1][2] He speaks Alethi with a thick accent, lengthening his "ah" and "oh" sounds,[1] although his accent is not as thick as Evi's.[3] He is described as slender or even spindly, and walks with a delicate gait.[1][2] He would never be mistaken for a soldier, even in military-style clothing.[2]

Toh is careful and overly cautious, with a certain sense of delicacy about him. He tends to act in a rather innocent and naive way, such as mistaking the aftermath of a brawl for a party, and he speaks a lot when nervous.[1][2] Dalinar thinks he is a sycophant when they first meet, although Gavilar and Ialai believe him to be genuine, but desperate.[1] 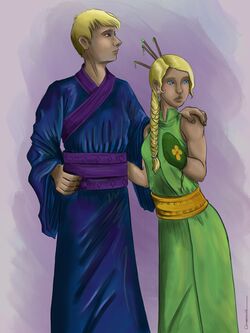 by Dragontrill
Toh with his sister Evi

He has some knowledge of military strategy in western Roshar, but is less informed regarding war in and around Alethkar. He displays curiosity about the ways in which they wage war, being particularly impressed with the use of Soulcasters. He seems to adore Alethi history, most of all the achievements of the Sunmaker.[1] He does not display the same aversion to war as his sister, although it's uncertain how much of his behavior is genuine, and how much is his wariness of Dalinar and the need to get into Gavilar's good graces.

Toh grew up in Rira with his sister, Evi. They presumably had a high level of status in their country, as Evi was gifted a set of Shardplate at some point in her youth.[1] When the two were in their late teens, they fled their home with Evi's Shardplate for unknown reasons, to the ire of their relatives.[1] Evi noted that they were "exiles" from Rira, even years later.[4] They sought out the Alethi and tried to use the Plate as a bargaining chip to gain political asylum, with Toh negotiating with Gavilar for the two of them. Toh initially seemed to have some reservations about the ability of the Alethi to offer protection, but his doubts were removed after he met Dalinar during his "Blackthorn" years.[1] Ialai suggested that marrying Dalinar and Evi would be the best way to solidify the agreement.[1]

Assisted by Riran customs, Toh dragged out the betrothal, using the extra time to try and add more favorable clauses into the marriage contract.[3] Toh wanted to become part of House Kholin's royal line, in addition to receiving protection from retribution by Rira.[1] After Dalinar won Kalanor's Blade and Plate, Gavilar believed that House Kholin's increased strength would not allow Toh to delay the marriage any longer.[1] Dalinar finally married Evi in exchange for the Plate, and both she and Toh gained significant status.[3] The Plate was later given to Adolin.[5] Iri, which was involved in a dispute over the possession of Rira, later made a claim to the Plate, although they would never have attempted war with Alethkar. Iri's royal line did not have any blood relation to Toh and Evi, further weakening their claim.[5]

For some time, Toh lived in Kholinar along with his sister. He seemed to integrate into Alethi society; he wore local fashion and was known to some of Dalinar's generals such as Havar. He displayed some disdain for Dalinar's habitual visits to firemoss dens.[2] Toh was present when Evi gave birth to Adolin, and brought the good news to Dalinar.[2] Several years later, he moved to the coast of Herdaz, where he lived for at least another decade under the protection of Alethi bodyguards.[4] He is nowhere to be seen during the War of Reckoning, making his current fate uncertain.

This page is complete!
This page contains all the knowledge we have on the subject at this time.
Big Smooth (talk) 20:12, 10 December 2019 (UTC)
Retrieved from "https://coppermind.net/wiki/Toh?&oldid=160272"
Categories: