Whitespines are dangerous crustaceans that live on Roshar. 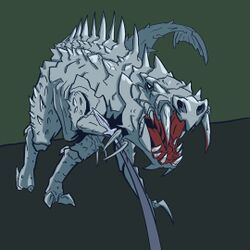 The eponymous spine is a row of spikes that runs from the head along the back of a whitespine. They are as large as horses, with a carapaced back, powerful legs, and a reptilian appearance.[1][2] They have long white tusks that are used for impalement which can break off and remain lodged in their prey, causing severe damage.[3] Whitespines have claws, including a set of vestigial claws behind their primary legs,[4][5] and they smell quite unpleasant, especially when wet.[6] They also have a nose of some sort that allows them to sniff and sneeze.[1][6] They are able to enter a dormant state, most likely to hibernate, during which they appear to become coated in a thick, hard crystal-like substance that takes time to accumulate. Water washes away the crystal coating in its early stages of forming, which would make it difficult for a whitespine to undergo this metamorphosis during a highstorm.[2]

Whitespines live in packs in dens[1] that are often strewn with the bones of the creatures they have killed.[7] Sometimes they will live near roadways to pick off travelers as prey.[1] They hide near the carcass of their recent kill after consuming its meat, then hunt the scavengers that are attracted to the carcass.[8] Whitespines are native to Alethkar[3] and possibly other areas. They are "nastier" than chasmfiends.[9] 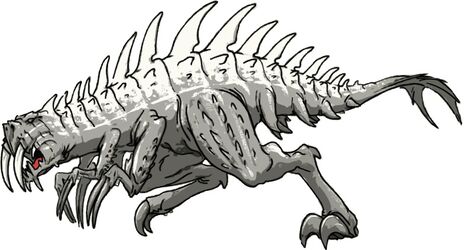 Whitespines are often hunted by lighteyes[3] and their darkeyed attendants, especially if the whitespines have been killing humans.

Brightlord Roshone and his son Rillir, along with Alds and Milp go hunting for a whitespine that has been attacking travelers.[3] They are attacked by the whitespine; Rillir is killed, and likely Alds and Milp as well. Roshone survives the attack, but loses his leg.[10]

Brightlord Amaram's glyphpair is in the shape of a whitespine with raised tusks, made up of the glyphs merem and khakh.[11]

“A little like the mink wandering into the whitespine’s den and asking when dinner is... ”

“The interior bristled with spears. Like the proverbial whitespine’s den. ”

This article is still missing information. Please help The Coppermind by expanding it.
Retrieved from "https://coppermind.net/wiki/Whitespine?&oldid=153346"
Categories: