The Fourth Bridge is Roshar's first airship, which uses hundreds of conjoiner fabrials to move through the air. Named after Bridge Four, it was built in the first year of the True Desolations by a team of ardents and engineers led by Navani Kholin.[1]

“Hundreds of laborers in Urithiru turning winches to raise and lower the ship. Dozens of chulls used to move it laterally. Thousands of fabrials to facilitate both—all needing to be perpetually reinfused. Careful synchronization via a half dozen spanreeds to coordinate maneuvers. ”

The Fourth Bridge is a rectangular, wooden box; a hundred feet long, sixty feet wide, and about forty feet high, with three decks within. Fans are built into the back to increase speed, though for now, the difference is minimal. At full speed, the ship travels at roughly five knots.[1]

The back half of the upper deck is covered by a semi-round roof, while the front half is open-air and surrounded by a railing. Bridge Four's original bridge is embedded into the floor; some of the Windrunners have a habit of kneeling down and touching it before taking off. A command station, composed of several tables, is typically placed in the sheltered section, though in some cases, it might be moved to the front. The furniture is bolted down.[1][3]

The lower decks serve as the hold. The bottom one has a broad door that allows large amounts of people to come in and out at once. It functions akin to a drawbridge; it forms a wall and can be lowered and raised by ropes to open and close. While sparsely-furnished, the holds can accomodate several hundred people.[1] There are numbers painted on their walls, dividing them into sections.[2][3]

The airship doesn't so much fly as it is held in the air by fabrials. There are hundreds of gemstones forming a lattice of massive conjoiners embedded into the ship. They are connected to a pair of "dummy ships". One of the dummies is hanging off the side of the Urithiru plateau; the other stands on the Shattered Plains.[4][5] The airship is steered from those two lattices; the Fourth Bridge communicates its needs to them through spanreeds. As they cannot be used for long periods of time due to movement, the scribes use them by turning them on and off, creating a code of blinks.[1]

The conjoiner fabrials are isolated using aluminum so that only certain planes of movement are transferred between the paired gem halves. The Urithiru structure can only convey vertical motion; the Shattered Plains lattice can only transfer horizontal motion. The former is lowered to raise the airship, while the latter is moved around to make it fly and turn in any direction.[5][1] To allow the ship to continue moving when the space for the lattices runs out, an additional aluminum mechanism is used to reverse the motion while the gemstones are temporarily unhooked.[1]

The entire structure requires significant manpower to function properly. In Urithiru, hundreds of people operate the winches that raise and lower the vertical lattice; on the Plains, squads of chulls are used to move the ship horizontally. The Fourth Bridge requires hundreds of gemstones to be perpetually infused with Stormlight.[1] Fans have been installed to ease the load on the horizontal fabrials, but as of right now, they are barely functioning. There are also weight concerns, as adding too much mass to the existing structure might cause the gemstones to crack.[2] 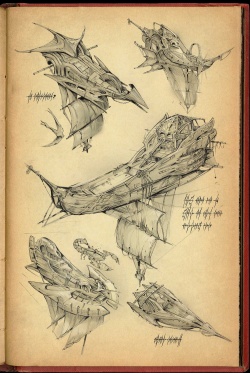 “Hey. Is that platform flying? ”

Navani Kholin began conducting her first tests a few months after arriving on the Shattered Plains, in the last year of the War of Reckoning. The earliest experiment was comprised of a tall tower, with its top and the column built as separate pieces, and a paired circular platform with crenellations. After infusing the embedded fabrials with Stormlight, when the pillar was rolled away, the top of the tower remained floating. As the top was pulled down, the platform rose into the air, creating an archer parapet unassailable to anyone standing below. While this was already useful, even back then, there were plans to do more with the technology.[6]

Over time, Navani and her ardents improved the platforms even as they began planning for more ambitious projects. Shortly after the True Desolation began, Navani started designing proper airships; her initial sketches were more ship-like, with massive sails attached upside-down to the bottom of the hull.[7] However, proper construction began only after the Battle of Thaylen Field, as Navani threw herself into work following the death of her son, Elhokar.[1] A few months after the battle, the Alethi built a pair of massive platforms off the sides of the Urithiru plateau as their early experiments. By then, rumours of what they were planning began to spread covertly among the high-ranking members of the coalition.[8]

“[Huio] left a bit of foiled aluminum in the mechanism, and it is interfering with the conjoined rubies in a fascinating way. ”

As the twin platforms were being constructed, the ship Wandersail set out to explore Aimia. As a favor to the expedition's leader, Rysn Ftori, Navani sent along Rushu, an ardent specializing in new fabrial designs.[8] Rushu attempted to make Rysn's chair float; however, the fact that the conjoiner fabrials had to repeat the exact motion -- or the reverse of the exact motion -- of each other meant that the applications were severely limited.[10]

A breakthrough came from Huio, one of the Herdazian Windrunners assigned to assist the expedition. An amateur fabrial scholar, Huio disassembled one of Rushu's spanreeds and began experimenting on the gemstone with aluminum. After he put the spanreed back together, it began to behave oddly, transferring the movement of its conjoined twin in an odd, jittery way. Realizing this would be a problem that couldn't be hidden, Huio and the other Windrunner on board, Lopen, brought the broken spanreed to Rushu.[11] Upon examining it and experimenting further on Rysn's chair, Rushu realized that Huio accidentally used aluminum to isolate the spanreed's planes of motion, so that only movement in specific directions was transferred between the two. This allowed for the creation of a floating chair that could move freely by being pushed around.[9]

Rushu later sent the information about Huio's discovery to Navani, who ordered further experiments. As a result, eventually, Falilar, one of her ardents, made a breakthrough that allowed for an airship to be constructed.[5] A new design, based off the chasm-spanning bridges from the War of Reckoning, was built and tested on the Shattered Plains. After months of deliberation, it was named the Fourth Bridge, after the people who, over a year prior, had saved House Kholin from destruction.[1] 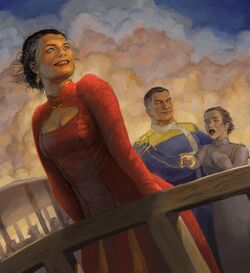 by Esther Schrader
Navani and Dalinar aboard the airship

About a year after the Battle of Thaylen Field, the Fourth Bridge began conducting endurance tests. For several weeks, the ship flew above the Steamwater Ocean, hiding from highstorms in coves and laits. At that time, it was staffed only by a small number of engineers and sailors to maintain it. It was then that highmarshall Kaladin suggested the first field deployment: rescuing all the citizens of his occupied home town, Hearthstone. Dalinar agreed, and the ship changed course, with Windrunners bringing in other Knights Radiant and the command staff, including Dalinar himself and Navani, about a day before it reached the town. Kmakl, the consort of the Thaylen Queen Fen Rnamdi, was likewise present.[1]

The arrival did not go smoothly, as Kaladin's approach to Hearthstone was discovered, leading to a squad of Fused being sent their way. However, the ship still successfully made landing, delivering the Radiants and picking up the citizens of Hearthstone and other refugees. The first among them was the Herdazian general Dieno enne Calah, who asked that the ship be used to pick up the remainder of his resistance forces, which Dalinar agreed to.[1]

As the evacuation progressed, the battle began to rage in the skies around the ship. The Fused were fascinated by the Fourth Bridge, trying to approach and take a look at its mechanisms;[12] Zandiel was able to gain a good enough look at the ship that he made some sketches of the craft.[13] Nonetheless, the Fused attack was pushed back and the Fourth Bridge successfully returned to the air, then began the long journey back to the Shattered Plains.[14]

“We could not have crafted the flying device they have. ”

In Kholinar, the airship caused some concern among the Nine who ruled the Fused, leading into a discussion about humanity's newfound technical prowess. It was this conversation that allowed Raboniel to suggest the plan to invade Urithiru.[13] Meanwhile, the Fourth Bridge arrived on the Shattered Plains twenty days after it departed. It landed there, letting the refugees off board.[15]

It's unclear what happened with the airship afterwards. Falilar and Navani both suggested a number of issues to resolve, including fixing the fans and checking whether the weight didn't crack the gemstones; as such, it probably remained on the Plains.[14] In Urithiru, Navani began workshopping ideas for new designs, though her work was interrupted by the Voidbringer invasion.[16] With conjoiner fabrials nonfunctional after Raboniel turned the tower's defenses on the Radiants, the airship most likely remained grounded for the entire period of occupation, as the vertical movement lattice was mounted in Urithiru.[17]

This page is probably complete!
This page contains most of the knowledge we have on the subject at this time.
It has yet to be reviewed.
Retrieved from "https://coppermind.net/wiki/?title=Fourth_Bridge&oldid=165309"
Categories: