Mazish is a singer on Roshar.[1] A former parshwoman, she is a member of Venli's group of singers that wishes to be free of the Fused.[1]

Mazish is a member of Venli's inner circle and has her full trust. She cares for Venli and believes in her plans.[3][4] She is willing to follow her instincts in a crisis even if it means changing course.[3] 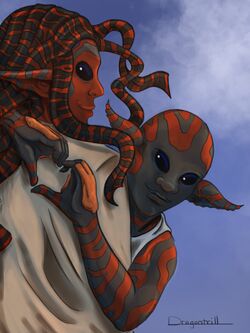 During the War of Reckoning, Mazish served as a parshwoman in Alethkar along with her mate, Dul. Their master was harsh, and rejected Dul's request for the pair to be married in the human tradition. After the coming of the Everstorm, Mazish and Dul's minds were awakened and they joined (or were conscripted into) Odium's forces. However, they soon became some of the first singers recruited by Venli to join her resistance movement.[2] The couple were able to get married after they were freed.[1]

Mazish became a friend of Venli's and one of the most trusted members of her inner circle. She was able to gain a position serving Leshwi in Kholinar.[1] She and Dul advised new recruits on how to act around the Fused. She was present when Shumin became Leshwi's assistant stormsetter, and subsequently attended a meeting with her in Venli's quarters.[1]

Mazish and Dul were presumably part of Venli's team that left Kholinar for Urithiru before the singers invaded the tower.[5] In Urithiru, Mazish was the first to inform Venli that Rlain had been captured.[6] She later helped watch over the fallen Knights Radiant after Raboniel's partial corruption of the tower's defenses. She also worked on hoarding supplies in anticipation of fleeing the Fused.[4]

Mazish was among the team of fifteen singers that Venli planned to covertly evacuate to Kholinar before fleeing to the Shattered Plains.[3] Venli trusted Mazish with a writ of authority from Raboniel that would allow passage through the Oathgates. Mazish was also the first member of the group to voice support for helping Kaladin and his family escape, citing Kaladin's friendship with Rlain as a reason to trust him.[3] After Leshwi's rebellion and the liberation of the tower, Mazish presumably went to the Shattered Plains via Oathgate with the rest of Venli's objectors, seeking to join the other listeners.[7]

This page is complete!
This page contains all the knowledge we have on the subject at this time.
Big Smooth (talk) 17:32, 8 February 2021 (UTC)
Retrieved from "https://coppermind.net/wiki/Mazish?&oldid=163944"
Categories: