Tumi is an mistspren on Roshar, bonded to Rlain. He's one of the true spren that have been Enlightened and transformed by Sja-anat.[2] 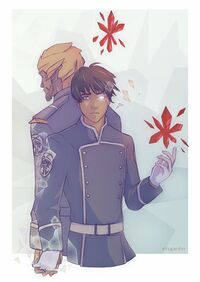 “Our bond will be strong, and you will be wondrous. ”

Very little is known about Tumi's appearance. During the occupation of Urithiru, he hid in the gemheart of a cremling, remaining invisible.[2] If he's similar in appearance to the other Enlightened mistspren, Glys, he likely appears as a red crystal dripping light upwards in the Physical Realm.[3] To Sja-anat's sight, he looks like a glowing, shimmering light, constantly changing shape.[1]

He's not hostile to singers the way other spren are, and considers it an honor to bond Rlain, even thinking him awe-inspiring. He's interested in exploring new things, even when they're potentially dangerous: he willingly underwent Sja-anat's transformation and expressed strong interest in the Rhythm of War, wanting to share the news of it with the rest of his siblings.[2] He reveres Sja-anat as his mother, and is grateful to her for the opportunity to see the world from a different perspective. He's also supportive of Rlain and hopeful about their bond, convinced that it will be something wonderful. He remains comforting to everyone he knows, regardless of their relative power. However, he is also cautious; he hides while in Urithiru, and follows Rlain for a while before introducing himself.[4][2][1] 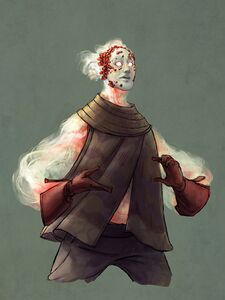 by Marie Seeberger
Tumi, as he might appear in Shadesmar

Tumi can hide from sight of others by entering gemhearts of cremlings; he seems to have some control over the creatures this way, guiding them on a specific path. This allows him to stay hidden from voidspren and Fused alike, even those designed to detect Radiant activity.[2] At times, his speech pattern is somewhat similar to that of the inkspren, using phrases like "salvation will be".[4]

Tumi is a mistspren, and as such grants Rlain the abilities of the Order of Truthwatchers. However, he was corrupted by Sja-anat, changing the properties of the bond.[2] While he should still grant Rlain the Surge of Progression, letting him heal others and grow plants, it's likely Rlain's Illumination will not function as it would for ordinary Truthwatchers.[5] Most notably, he grants Rlain the ability to see visions of the future, and seems able to induce them, or at least encourage them to appear. Like with Glys, the visions take form of images made out of what looks like stained glass.[4]

“I will go, Mother. To the tower, to this man Mraize, as you have promised. ”

While the circumstances around Tumi's transformation are unknown, it seems he deliberately approached Sja-anat to be Enlightened.[2] When that happened is unknown; however, a year into the True Desolation, Sja-anat sent him to Urithiru to investigate members of the Ghostbloods for a possible bond, due to Mraize's efforts -- through Shallan -- to get the Unmade to cooperate with him.[6] While Sja-anat was hesitant to let Tumi go, wary of both Mraize and Odium, Tumi insisted on forming a bond and set out.[1]

At roughly the same time, Renarin, the only other Truthwatcher to have bonded an Enlightened spren, convinced his father to allow "corrupted" Surgebinders into the ranks of Knights Radiant. When Glys asked who else would join their ranks, Renarin almost immediately suggested Rlain, the only singer within Bridge Four.[7][2] Somehow, Glys managed to pass this request on to Sja-anat, who in turn sent it onwards to Tumi. As such, the mistspren started looking into Rlain, examining him as a potential bondmate.[4] 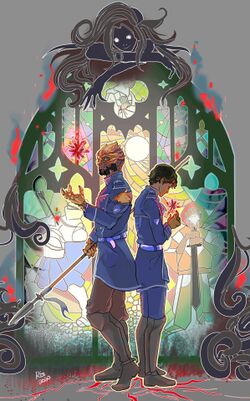 “I have watched you and seen your worthiness. Speak the Words, and do not despair. ”

Before Tumi could form a bond, the Fused and their forces invaded Urithiru, the Knights Radiant were rendered unconscious, and Rlain was locked up for being an essai, or "human-lover".[8] To hide from secretspren, Tumi entered the gemheart of one of the cremlings inhabiting the tower, and began following Rlain.[2] At some point, Rlain noticed it, and grew paranoid about the cremling's presence, suspecting that it was a voidspren trying to spy on him.[9]

When the revolt against the Fused began in the tower, Tumi started following the group closer by, directing his cremling to go after Rlain as the singer led his group, including humans, Venli's listeners and Fused, to escape Urithiru. Impressed by Rlain's actions in bringing the three groups together, Tumi chose to bond him, and informed Timbre, Venli's spren, about it. When Rlain asked Venli if she'd be willing to lend him one of the Reachers following her, she passed on the news: Rlain had already been claimed by another spren.[4]

It was then that Tumi chose to reveal himself. Showing Rlain a vision of Kaladin swearing his Fourth Ideal and Urithiru coming alight, he bestowed the title of Bridger of Minds onto him and implored him to speak the Immortal Words and form a bond.[2] Rlain did so, becoming a Truthwatcher; from then on out, the two could communicate mentally, without speaking out loud.[2]

Over the course of the following day, Tumi learned about Rhythm of War, combining Honor's and Odium's Rhythms similarly to how Tumi himself combined Honor and Odium's Investiture, and grew interested in sharing news of it with his siblings. He also explained to Rlain that he approached him for a bond at Renarin's suggestion, though it was Rlain's own actions that convince him it was worthwhile.[2]

This page is probably complete!
This page contains most of the knowledge we have on the subject at this time.
It has yet to be reviewed.
Retrieved from "https://coppermind.net/wiki/Tumi?&oldid=171299"
Categories: