“They like to travel, to see new places. They sail all across Roshar's Shadesmar, peddling goods, trading with other spren. ”

Reachers, also known  as lightspren, are a subset of sapient spren on Roshar.[1] Bonding with them makes a person a Surgebinder of the Order of Willshapers.[2] 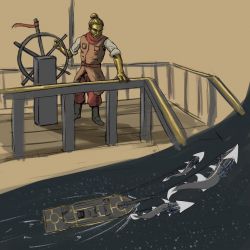 In the Physical Realm, lightspren appear as a ball of light, small enough to hide in a palm of a hand. When they move, they trail around a glowing streak, making them look like a comet.[3][4] The light can grow stronger or fainter, seemingly depending on the spren's mood.[5] Lightspren seem to be a little more tangible than their kinsmen when in the Physical Realm -- wind pushes them, they are warm, and feel somewhat like silk to touch.[6] They can communicate through pulsing to the rhythms of Roshar, which produces bursts of light, as well as audible vibrations.[6][7] For a singer, those vibrations appear to carry more meaning than simple mood, including more abstract concepts like familial relations and high numbers.[8]

In the Cognitive Realm, lightspren appear human and can have features similar to different Rosharan populations, though they have metallic bronze skin, making them look like living statues.[9] They have bronze metal eyes with holes where the pupils would be.[10] Their hair is similarly metallic bronze; the lightspren pin them into buns and ponytails.[11][12] Unlike honorspren or Cryptics, lightspren don't seem to have clothes as part of their essence; instead, they wear human-like clothing of earthy, tan colors, with numerous buttoned pockets. They seem to prefer going barefoot.[9] While most lightspren adopt a human form, they can take other forms.[4]

Lightspren are not known for being overly talkative to others.[9]

The lightspren on Ico's ship are barefoot so that they can walk along the vibrating copper lines set into the deck, which Shallan believes are used for wordless communication between the lightspren.[9]

In the Physical Realm, lightspren seem able to move very quickly, as well as hover and fly, although they cannot become invisible.[5] They are capable of overpowering lesser voidspren, and can live inside the gemheart of a singer.[13] They can also pulse to Odium's rhythms, though doing so appears to cause some pain.[14]

Lightspren  are one of the spren types capable of forming Nahel bonds. Bonding them makes a person a Surgebinder with the Surges of Transportation and Cohesion.[15] Notably, they are the first sapient spren to be shown capable of forming a Nahel bond with a singer rather than a human. While the bond does seem to afford them a higher level of intelligence as it does with other spren, lightspren appear incapable of communication; however, it's uncertain whether this is a consequence of bonding a singer, or if a lightspren bonded to a human would also be mute.[13] Despite this, they are able to communicate with their singer via pulses and Rhythms and are able to read their Knights thoughts.[16][17] Lightspren are able to mute the rhythms of their Surgebinder.[18]

During the Heraldic Epochs, the lightspren began bonding people in an effort to emulate the Honorblades, giving rise to the Order of Willshapers.[19] When the Recreance came, they, like other sapient spren, lost a tremendous number of their kinsmen, including many family members.[8] By the Era of Solitude, they managed to rebuild their society, becoming well-known guides and traders.[1]

When Kaladin, Shallan, Adolin, their spren and Azure were stranded in Shadesmar, they managed to find passage to Celebrant on a Reacher-crewed ship commanded by captain Ico, in exchange for barter supplies and dun spheres.[9] It's uncertain how many lightspren have chosen to begin forming Nahel bonds again, though there are some willing.[8][17] 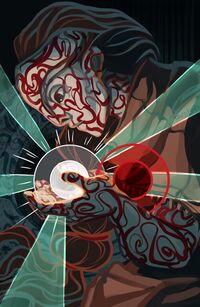 Lightspren are adept sailors and explorers, journeying across the Sea of Souls in ships pulled by teams of mandras. Because of this, they often serve as guides for newcomers, and trade extensively with various spren cities and settlements.[1] They usually don't carry weapons other than knives, although their ships are equipped with large harpoons, likely to defend them from hostile lesser spren.[9]

It's unknown if lightspren have settlements of their own, although they are very common in Celebrant. There, they live and work, selling goods -- including off-world imports like Nalthian paintings -- or exchanging money. Celebrant docks also seem to be crewed mainly by lightspren , who assist in docking the ships and unharnessing mandras.[12][10]

While lightspren can be both male and female, they don't seem to practice any sort of division between genders -- both can be seen performing the same jobs, wearing the same clothes, and reading.[9]

The Recreance has left the lightspren with a deep-seated mistrust in humans and their oaths. Some seem to be understanding of humans using deadeye Shardblades for their own purposes, though there is an undercurrent of resignation to this, as they seem to believe that it's inevitable for human oaths to be broken. Nonetheless, they seem intent on being helpful, easily trading with humans and providing them with means of survival. They're also willing to provide advice free of charge.[9][10]

This article is still missing information. Please help The Coppermind by expanding it.
Retrieved from "https://coppermind.net/wiki/Reacher?&oldid=160785"
Categories: