“We're spren, but my kind—cultivationspren—are not very important. We don’t have a kingdom, or even cities, of our own. ”

Cultivationspren are a type of sapient spren on Roshar. They are capable of forming a Nahel bond, granting people the powers of the Edgedancers.[2]

In the Physical Realm, cultivationspren take the form of a vine that grows rapidly. This vine appears to be speckled with smooth flecks of quartz, but it does not glow with Stormlight. They can form the appearance of a face by curling vines around one another.[3] After a time, the vine trail they leave behind solidifies, becoming like crystal before crumbling into dust.[2]

In the Cognitive Realm, cultivationspren are, like other sapient spren, humanoid. They appear to be composed mostly of vines, and their faces look as though they are composed of green string.[4][5] Their hands, eyes, and teeth made of crystal, though their hands are still as flexible as flesh.[4][3]

They all wear clothing, which doesn't seem to necessarily be part of their essence -- one female cultivationspren was spotted wearing a vorin havah.[5]

A deadeye cultivationspren looks similarly to a living one, albeit dried out.[4] Rather than vines, their bodies look as though made of ashen brown cords thin as hair, giving the appearance of rough cloth or a cluster of brown vines.[6][7][8] They also have long nails.[8]

Out of all spren, cultivationspren are the best at manifesting souls from beads in Shadesmar. For this reason, they often work creating gardens for other spren.[9] Rather than plants, cultivationspren gardeners create elaborate structures out of objects such as chairs.[10]

In the Physical Realm, cultivationspren are invisible to all but their Surgebinder, although the remnants of their vines disintegrating can be seen.[11] They can also not be heard by others as well.

Cultivationspren can form Nahel bonds with humans. Through this, they can grant the Surgebinding abilities of Abrasion and Progression.[1] Like other Radiant spren, they lose their memories upon entering the Physical Realm, although it seems as though the Ring has some ability to lessen this effect by careful preparation.[10][1] 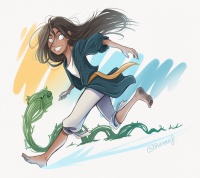 “Oh, we've jumped right into the sea of glass feet-first, but we barely know what we’re doing! ”

While the origins of the cultivationspren are unknown, it's possible that they were created by Cultivation herself.[2] Back in the Heraldic Epochs, cultivationspren began forming Nahel bonds with humans, creating the Order of Edgedancers. When the Recreance came, they were decimated, with anyone who would know how the Bond works turned deadeye. Over the millenia, their society recovered somewhat, albeit they never created grand cities or a nation.[1]

Shortly before the True Desolation, they saw the honorspren and the Cryptics begin to bond humans again, and decided that they must keep up. The Ring, their ruling body, sent Wyndle to bond with Lift, and possibly some other spren as well.[1][10]

When travelling through Shadesmar, Kaladin's and Shallan's group encountered a cultivationspren working as a dock registrar in Celebrant. He was the one to explain the Voidbringer presence in the city to them, and later stalled the Fused so that they could escape.[4] Wyndle and his Radiant Lift proved invalauable in securing the King's Drop for Dalinar to use to trap Nergaoul during the Battle of Thaylen Field.

In the year following the battle, even more cultivationspren bonded with humans to create more Radiants.[12] The cultivationspren as a group were generally disposed favorably to the newly refounded order of the Edgedancers.[13] 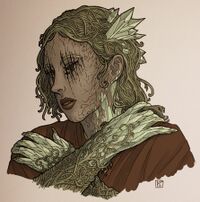 “Oh, glorious day. Glorious! We have waited so long for the honor of men to return! ”

Fittingly, cultivationspren seem to worship Cultivation more so than Honor, swearing by her name and calling her Mother.[14] They are skittery and often fearful, seeking to avoid bringing danger upon themselves.[15][4] When push comes to shove, however, they can be relied on regardless of how dangerous a situation is.[16][4]

It's unknown what their general attitude towards humans is, but the ones seen so far are not opposed to Nahel bonds, with the dock registrar in particular being excited about the return of the Knights Radiant. Going by his comments, this is a wide-spread opinion.[4]

Unlike other sapient spren, cultivationspren don't have their own nation or settlements in the Cognitive Realm.[1] Rather, they live alongside other spren in cities where various types intermingle, like Celebrant.[4] Nonetheless, they have their own government, a council known as the Ring, which in the present day is responsible for choosing which of their kind should bond who.[10]

This article is still missing information. Please help The Coppermind by expanding it.
Retrieved from "https://coppermind.net/wiki/Cultivationspren?&oldid=164470"
Categories: