“The Almighty cannot die. People can die. Heralds can die. Even Honor can die. But Honor, people, and Heralds will all live again- transformed, Soulcast through His Power. I'm still learning. We all are. The Book of Endless Pages cannot be filled ... though your father made a very nice addition to the text." ”

Godeke is an Edgedancer on Roshar who used to be an ardent.[2]

Godeke is a thin man on the short side, with a gaunt face, short cropped hair and a square beard still maintained in a style akin to an ardent's.[3][4]

He's a scholarly and curious man, packing books with him for the trip to Shadesmar and rejoicing at the chance to explore the Cognitive Realm as a beauty made by the Almighty.[5] He tends to have a positive outlook, but also tends towards solemnity.[1] 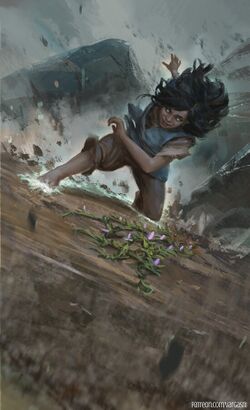 by Randy Vargas
Sliding along the ground with Abrasion

Godeke is an Edgedancer and as such has access to the surges of Abrasion and Progression.

Godeke used to be an ardent before his bond was formed and he joined the Radiant forces in Urithiru. He states he used to be "deformed" all his life, and his Nahel bond allowed him to heal and become as he has always seen himself. His reference to The Book of Endless Pages could possibly indicate he belonged to the Devotary of Sincerity. His bonded a Cultivationspren named Archinal, who presents in the Cognitive Realm as a short woman in robes, made entirely of vines and crystal.[5] He claims to have had some experience in matters of diplomacy.[4] He speaks Thaylen as well as Alethi.[6]

Godeke was one of the Edgedancers brought with the Fourth Bridge to help evacuate the civilians and heal the battling Radiants in Hearthstone. He was guiding a group of refuges to the airship when Leshwi flew by closely being followed by Kaladin. The shardblade of the Edgedancer almost hit her but only sliced her robes.[2]

Later, he went with Roshone to the manor to help free the people trapped in the burning building.[2] In the manor he was taken hostage by a fused who took him out to use as bait. When Kaladin entered the building, he found Godeke injured severely by a Fused who slashed his stomach, and the new Surge-cancelling fabrial in effect, prevented the Edgedancer from healing with his Stormlight. After Kaladin fought the present Fused and singers and disabled the device, he ordered Lift to evacuate the slowly-healing Godeke.[3]

Godeke is part of a group of Edgedancers attending one of the meetings of the coalition. A proposal was brought up to send an envoy to the honorspren to persuade them to bond more radiants. When Dalinar suggested sending an Edgedancer, Lift volunteered first. The rulers were not comfortable with that, and when Dalinar suggested they send someone with practice as a diplomat, Godeke spoke up that he could try and had some experience with these kind of things. He would be joined by Adolin, Shallan, a Truthwatcher and Stoneward.[4]

The expedition was gathering near the Oathgate platform. When approaching, Godeke noticed Adolin packing his horse and asked him how many swords he needed. The highprince replied you could never have too many and proceeded to show of his collection. Godeke quickly extracted himself from the exchange and hurried along.[7] The group went to shadesmar and started hiking down from the Oathgate to sea level. At some point, Adolin came walking beside Godeke, who expressed wonder at all the works of the Almighty they could now see. The former ardent thanked the highprince for taking him on the expedition. They proceeded to talk about Vorinism and how Godeke believed Honor was just an aspect of the Almighty, and as such the Almighty could not die. When Dalinar came up he called him a holy man, and so it was fine for him to write. Godeke compared Dalinar's vibrant transformation to his own smaller transformation when his deformity was healed.[5]

When after sailing for weeks they finally sighted land, Godeke was eager to leave the ship. The lightweavers went ahead to scout, while Godeke and Adolin discussed how the stormlight in even their biggest gems had started to fade. The highprince asked Godeke to take their last stormlight into town and trade it for supplies. After going into the town, Godeke came searching for Adolin to get him to look at a group of humans.[8] Together they went to check them out. They found a caravan of what appeared to be Tukari. They tried to talk to them in various languages, with Godeke speaking Thaylen. The caravan responded in a hostile way, and the edgedancer concluded they were Tukari indeed.[6]

Later the Radiants and their spren discussed how to approach the honorspren. Godeke agreed with the Stump that trying to guilt them into helping would not work, nor would threats. The group could not come up with a better alternative.[9] Later Godeke was scouting ahead with his spren, he had practiced during his Radiant training. After a break, Adolin suddenly realized the Tukari were not following the expedition, but Notum the honorspren. The highprince ran to the rescue and Godeke and the others marched after him as fast as they could.[1] After Adolin's fight, Godeke inspected the prince's side wound and bound it, as they had no stormlight left to heal with. Before they left, the edgedancer went among the fallen and memorized their faces. When the group reached Lasting Integrity, Godeke joined the others in objecting to Adolin's plan to stand trial.[10]

After Adolin's capture in Lasting Integrity, Godeke camped near the city with Felt and Malli to await the results, while the rest of the expedition had gone back to tell Dalinar what had happened. The Edgedancer had been allowed into the city just to heal Adolin. The communicated via letters[11], and informed Adolin when Notum had returned to patrolling.[12]

This page is probably complete!
This page contains most of the knowledge we have on the subject at this time.
It has yet to be reviewed.
Retrieved from "https://coppermind.net/wiki/Godeke?&oldid=170922"
Categories: