“We are the listeners. We will cast off everything—including our very forms if we must—to find freedom. ”

The listeners, called the Parshendi by the Alethi, are a group of singers on Roshar.

Prior to the True Desolation, they lived on eastern Roshar, near the Shattered Plains. During the War of Reckoning, they inhabited the city of Narak.

The Last Legion and Abandoning of the Gods[edit]

“The Last Legion, that was our name then. Warriors who had been set to fight in the farthest plains, this place that had once been a nation and was now rubble. Dead was the freedom of most people. The forms, unknown, were forced upon us. Forms of power, yes, but also forms of obedience. The gods commanded, and we did obey, always. Always. ” 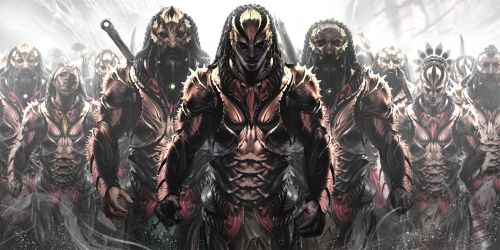 by Petar Penev
A Listener army

The listeners were originally called the Last Legion,[2] and like other singers in the Voidbringer army, they followed the commands of the Fused, who were the listeners' gods. The listeners lived in somewhere called the dark home (but this might have been metaphorical for being under Odium's influence, and not an actual place). The Last Legion was sent to fight in the farthest plains, probably the plains of Natanatan and the Shattered Plains.[2]

One day the Last Legion fled, leaving the forms of power for dullform. Despite being thus crippled, it would lead to freedom from their gods. These listeners composed many songs to remember their history and forms, such as the Song of Listing, Song of Secrets, and Song of Histories because they risked forgetting everything. They had only known how to transform into forms other than dullform and mateform with the help of gods.[2] Modern-day listeners call this period "the long sleep." [3]

Since the listeners recall this story about throwing off the Fused, this event must have occurred prior to or around the time of Aharietiam, the Last Desolation, as the Fused were trapped in Damnation for four and a half millennia after that point.

Later, near the time of the Recreance and what was probably the False Desolation,[4] the Unmade Ba-Ado-Mishram Connected to most singers, providing the singers with forms of power and Voidlight.[5] The Knights Radiant sought to stop this threat by imprisoning Ba-Ado-Mishram. They succeeded but in doing so, stole part of singers' souls, turning them into slaveform.[6] The listeners were spared from this event, and so it seems that they were not involved with the False Desolation. They became the only singers on Roshar with their minds still intact. The listeners inhabited the broken kingdom of Natanatan and the Unclaimed Hills in eastern Roshar for long time, unknown to most humans.[2] For much of this, they knew only dullform and mateform, but eventually discovered workform. 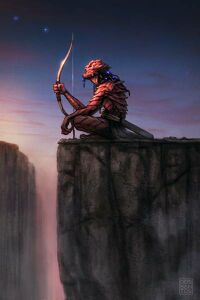 To modern humans, the listeners were originally discovered by Alethi King Gavilar's brother Dalinar Kholin during a hunting trip.[7][8] Dalinar was scouting in a forest that wasn't on any maps, in a valley south of the Shattered Plains and about two weeks' march from the Drying Sea. There, he found Eshonai, exploring.[9][10] She led the humans to her family's camp. In that same day, Venli had discovered that painspren may be the key to discovering warform, but her discovery was overshadowed by her sister's.[7]

In the next human visit, Eshonai and Venli's family had already taken one of the cities at the border of the Shattered Plains. Venli had made no more progress in discovering warform. One of the Alethi, Axindweth, gave a gemstone to Venli with Ulim trapped inside, saying it might help her cure Jaxlim.[11] Venli broke the gemstone, and started talking with Ulim.[13] Ulim helped Venli cut a gemstone so that it glowed more brightly, and trap a painspren in it.[14] She made about two dozen gemstones with painspren, and gave them for listeners to adopt warform. One of those was Jaxlim, but since Jaxlim didn't adopt the proper mindset for the form, Eshonai, who was acompanying her, took the form instead.

After the storm in which they adopted warform, another family attacked them. So, the warform listeners and the family's Shardbearer went out and told them to unite with their family, in order to show the humans an united nation when they next came to the Shattered Plains.[15] They went to dozens of families with their proposal of unity, and they all gathered in Eshonai and Venli's city. Venli told Ulim to have his contacts among the humans make Gavilar bring listeners to the human cities, hoping to intimidate the other listeners and convince them to take forms of power.[16]

However, upon visiting the human cities, the listeners weren't intimidated; they liked the city, and enjoyed themselves there.[17] They signed a treaty with the humans, and there was a party to celebrate it.[12] That day, Nale approached Venli, saying Gavilar was going to betray the listeners and that Venli had to assassinate the king to stop him. That gave Ulim the idea of killing the king to drive the humans to attack the listeners, to intimidate them.[17] At the same time, Gavilar indicated to Eshonai that he wanted to bring back the listener gods. Since the Council of Five feared their gods' return, they voted and decided to kill the king to stop him. Ulim had guided Klade to buy Szeth, so they sent Szeth and he killed Gavilar.[9] The assassination led to the formation of the Alethi Vengeance Pact and caused the War of Reckoning, a prolonged war between the listeners and the Alethi on the Shattered Plains.

by Caio Santos
Listeners after a battle with the Alethi

During the war, the listeners moved their population to the city at the center of the Shattered Plains. They named the city Narak, meaning exile, because they were trapped there after the humans moved to the cities at the edge of the Plains.[18][19] With help from Ulim, Venli discovered nimbleform, though it still took her several tries to do it.[20] The war of attrition lasted for six years, and the listener population slowly dwindled.[2]

In the meantime, Venli worked to discover stormform. When cutting gemhearts to make them brighter, her scholars secretly saved pieces of the gemstones to store spren. The main problem Venli was trying to solve was how to draw the stormspren to the Physical Realm.[20] She eventually discovered that lightning pulls the spren through, and managed to trap the spren.[21] Venli brought the form to the Five, and they agreed, though Eshonai insisted she should be the one to try the form, because Venli was too valuable with her knowledge of the forms.[2]

Eshonai took the form, and when she returned to the Five, she proposed to transform every listener to stormform, to summon a storm against the Alethi. However, Zuln didn't agree, and she convinced Abronai to disagree as well. So, Eshonai went to the listeners and proclaimed that the Five could not forbid someone from taking a form if they wished to, and that she would take everyone who wished and transform them into stormform. She gathered the people that refused to transform, and put Thude to guard them. They fled into the chasms, and Eshonai let them, because they would be killed in the next highstorm.[22]

At the Battle of Narak, where Highprince Dalinar Kholin led an expedition to end the War of Reckoning, the listeners in stormform sung a terrible song. It formed the Everstorm and with it, the True Desolation began.[23]

Shortly after the Battle of Narak, the Fused began to take listener bodies.[24] It seemed that they transformed every single listener into a Fused, except for Venli, who was chosen by Odium to remain alive, taking envoyform; however, it was later discovered that others survived, specifically Rlain, Thude, Jaxlim, and some others who resisted the change to stormform.[25][26][27][28]

Odium used Venli to tell the story of the listeners to the new singers, to inspire them and show them that the people who summonned the Everstorm are singers like them, not beings of legend. Instructed by Odium, she painted the listeners as an heroic group, sacrificing themselves to free the enslaved singers, to be the foundation myth of Odium's growing empire.[26] However, Odium also feared the listeners, as the people who had rebelled against him, so he stopped allowing Venli to answer questions and instructed her to tell her story in a specific way.[29]

The composition of the Five has changed over time as more forms are discovered. At first, the Five were all in dullform, and later, after the discovery of workform, the members of the council were all in workform. When nimbleform was discovered, the Council changed to being made up of one member of each form. The Council had pondered whether to add another representative for each newly discovered form, but the discovery of stormform and the subsequent Battle of Narak meant that there was never an opportunity to do so.[2]

For a full list of those in the group, see Category: Council of Five.

Prior to the War of Reckoning, the listeners were organized in tribe-like families that would vie for control of the ten cities along the western border of the Shattered Plains. Some notable listener families include:

The family of Eshonai and Venli, and likely also Rlain,[19] Thude,[13] and Bila.[13] They were thousands strong around the time Eshonai first met with King Gavilar's expedition and boasted a noble heritage, though it had been many years since they had controlled one of the ten cities.[10]

The first family approached by the First-Rhythm family after the discovery of warform in their attempt at unification of the listener tribes.[15]

Known to have raided the Fourth-Movement family out in the wilderness, away from any city, in an attempt to steal their weapons. This action earned them the scorn of other families.[10]

Once raided by the Pure-Song family in an attempt to seize their weapons.[10]

Malen listeners grew beards, which they thread through beads infused with Stormlight.

The listeners learned how to capture spren in gemstones by watching humans, then working out the process for themselves. This allowed them to change forms much more reliably. Before capturing the spren they wanted for the form, there was a chance a listener would end up in a form they did not want.[2]

Gavilar believed the humans stole the parshmen's ability to transform by capturing "an ancient, crucial spren" in a gemstone.[30]

The listener language is descended from the Dawnchant and is related to the Shin and Unkalaki languages.[31]

For a full list of listeners, see Category: Listeners.

This article is still missing information. Please help The Coppermind by expanding it.
Retrieved from "https://coppermind.net/wiki/Listener?&oldid=160326"
Categories: