This page or section needs to be updated with new information for Rhythm of War!
Be aware that in its current state, it may not include all additional content yet.
This article's title is uncanonical and a fan created one, because an official term or name has not been made yet.
This page or section deals with theories or speculation.
Please read carefully and note that this is not necessarily canonical.
It has been suggested that this page be merged into Raysium#Weapons.
The information on this page is much better suited to be included on other pages.

Vyre's knife is a bright golden or yellowish-white blade with a sapphire set into the pommel, used to kill the Herald Jezrien and trap his soul so that he couldn't be reborn.[1] The metal of the knife is described as unusually bright.[1]

The knife is made out of Odium's God Metal, raysium.[2] 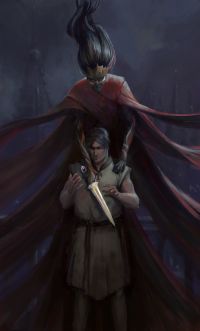 The circumstances of the knife's creation are unknown. It was given by the Fused Hnanan to Moash (later known as Vyre). Hnanan told Moash that Odium had tasked him with killing a god; Moash noted that the Fused appeared to be afraid of using the knife on Jezrien themselves. Moash then used the knife to kill Jezrien. After the murder, Moash removed the knife from Jezrien's body, but the subsequent fate of the knife is unknown.[1]

The knife can kill a Herald by trapping the soul, preventing the Herald from returning to Braize as a "conventional" Herald death would.[3] Jezrien, while initially in a drunken stupor, quickly realizes that something about this death is different and claims to feel the knife drawing something from him into itself. Shalash likewise instantly distinguishes it from previous deaths, as she could no longer sense Jezrien's soul.[1] The knife "traps" the soul so it can't be reborn.[3] This process operates under similar principles to the Scadrian manifestation of Investiture known as Hemalurgy,[4] where practitioners are able to steal part of an individual's spiritweb using metal spikes.[5] It would cause debate among cosmere philosophers whether the knife's magical properties are in fact Hemalurgy or rather a related, but distinct, phenomenon.[6]

Following Jezrien's death, the sapphire set into the knife takes on a "subdued glow". The sapphire in the knife's hilt is specifically for Jezrien.[7] Whether the use of that specific polestone is mechanically relevant or only symbolic is unknown.

The knife shares characteristics with Nightblood, as they both bleed black smoke and leave blackened wounds.[8][1]

This article is still missing information. Please help The Coppermind by expanding it.
This article was complete and reviewed prior to Rhythm of War, but now needs to be updated.
Retrieved from "https://coppermind.net/wiki/?title=Vyre%27s_knife&oldid=155373"
Categories: