“It is well I spent these weeks training you in basics. This will prepare you for your best hope of victory... ”

Blended is an inkspren on Roshar.[1] She is the inkspren representative at Lasting Integrity and trains Adolin Kholin on honorspren law before his trial,[1] though she later also testifies against him.[2]

Like other inkspren, Blended's entire body is ebony black, with an iridescent sheen in the right light, similar to oil on water. Her clothing, a knee-length skirt with a blouse and shawl similar to attire worn by a Thaylen tradeswoman, is part of her essence. Blended has a round face and a small nose, outlined more clearly by faint variations in her color. She wears her hair pinned up in something similar to but not quite a braid. Similar to other inkspren, she speaks in a direct and clipped manner.

Throughout Blended's interactions with Adolin, he notes that she has a habit of not looking at others when she has something difficult to say.[1]

As all sapient spren are affected in some manner, she can feel the highstorm like a drumming in the back of her head.[2] She is also incredibly knowledgeable on the practice of honorspren law.[1]

Blended was alive during the time of the Recreance, and watched many of her friends and family die.[2] 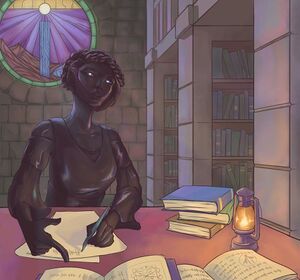 by EccoS
In Lasting Integrity

“This is unsurprising, as it was devised by a stuck-up bunch of prim, overly polished buttons. ”

—Blended on the honorspren and their legal system[3]

In preparation for Adolin's trial, she trained him in the ways of honorspren law, however; during the actual trial, Blended testified against Adolin stating that although she wanted the trial to be fair, her hatred of humans "also is."[2] After Adolin's trial, she admits that she was the one to suggest Maya as the final witness.[4]

After the trial and the revelation that Maya and the other deadeyes chose to abandon their oaths with their Radiants, she decides to leave Lasting Integrity and return to her people in order to share the news with them.[4]

Adolin spends many weeks training with Blended while in Lasting Integrity. Upon meeting her, he finds her name peculiar.

Blended feels that the Nahel bond with humans is not natural,[2] and states that if a human tried to bond her, she would attack and attempt to kill them.[1] She believes that men are untrustworthy, changeable, and barely go a single day without breaking a bond. She thinks that spren should never again bond with humans, and that this is the surest way to avoid more dead spren.[2]

Blended notes that even though the singers broke their oaths with spren, it was never on the scale that humans did. She also notes that singers are the rightful heirs of Roshar.[2]

This page is probably complete!
This page contains most of the knowledge we have on the subject at this time.
It has yet to be reviewed.
Retrieved from "https://coppermind.net/wiki/Blended?&oldid=163937"
Categories: