“Being a Radiant isn't so much about your strength or skill, but about your heart. And yours is the best of all of us. ”

Hobber is a member of Bridge Four and a Windrunner.[2]

Hobber is round-faced and lean. He has a gap between his teeth and short black hair.[3] He has a tattoo on his forehead to cover up his slave’s brand.[4] Hobber is frequently one of the more positive men in Bridge Four, always supporting Kaladin and the rest of the men. He likes to joke with the others and help wherever he can, even when he is severely injured. He follows the Passions.[5]

Hobber is a Windrunner of at least the Second Ideal.[1] He has the ability to draw in Stormlight and use the Surges of Adhesion and Gravitation.[2]

Hobber was assigned to the bridge crews after getting into a drunken brawl along with his squad. While he was probably just going along with that the others were doing, a man ended up dead, and he was punished accordingly.[6]

During Kaladin’s first run as bridgeleader, he found an injured Hobber laying beside the bridge. He had taken an arrow through the thigh and was moaning in pain. Kaladin grabbed him under the arms and pulled him to safety. Determining that the arrow hadn’t hit any major arteries, Kaladin returned to the battlefield to retrieve more injured bridgemen. After tending to the more severe injuries, Kaladin returned to Hobber and cleaned, stitched, and bound his wound. Kaladin ordered the men to tie Hobber and Dabbid to the top of the bridge so they could transport them back.[7]

When Kaladin checked on the wounded, Hobber was smiling openly. He thanked Kaladin for saving him. Kaladin told him he wouldn’t be able to walk for a few weeks, but that he would bring him food from the mess hall. Hobber just thanked him again, taking his hand, almost tearing up. Kaladin moved on to Dabbid and Hobber told Kaladin that he’d been sitting like that all night. Hobber thought he’d been hit in the head, but Kaladin disagreed, calling it battle shock and that it would wear off. Hobber just hoped he was right.[3]

After a few weeks, thanks to the food and antiseptic Kaladin was able to get, Hobber limped out of the barrack and joined the rest of Bridge Four for their first pot of stew.[8] Before long, Hobber could walk without his crutch and it wouldn’t be long before he could start running bridges again. In the meantime, Lopen recruited him, along with Dabbid, to help carry water for the rest of Bridge Four.[9]

“No, sir. I wasn’t freed from Bridge Four. I was freed by it. I wouldn’t trade my time there for anything.”

—While getting his tattoo[4]

When Bridge Four decided to get tattoos, Hobber was the first one to jump at the chance as he was the very first one to believe in Kaladin. Even during the painful process, Hobber kept a grin on his face. As the tattooist finished, Hobber asked what it meant. Sigzil answered that it meant “freedom.” Hobber said that it was good, but not good enough. He wanted “Bridge Four” added to it, because Bridge Four was what freed him. While Kaladin didn’t understand it, he drew the glyphs anyways so they could be added to Hobber’s tattoo. Once Hobber was finished, the others requested the same. Hobber, along with the rest of Bridge Four, objected when the tattooist said she couldn’t tattoo Shen because he was property. The tattooist gave in and before long, all of Bridge Four, with the exception of Kaladin, whose ink wouldn’t take, had the matching “Bridge Four” tattoo.[4]

Encountering the Assassin in White[edit]

Kaladin, after receiving warning from Syl that there was darkness in the palace, assigned Hobber and Beld to an advance squad in charge of scouting a way out of the building. The two men scouted ahead, but they ran into Szeth. Szeth cut down Hobber, leaving his legs darkened and grey, dead. He then stabbed Beld through, killing him. After fighting Szeth, Kaladin found Hobber weeping. He apologized to Kaladin and explained what happened. Kaladin tried to reassure him, but Hobber told him he couldn’t feel his legs, that he was useless. Kaladin objected firmly and told him he would always be Bridge Four. Kaladin offered that they could have Rock teach him how to cook. Hobber countered that he was an awful cook, but Kaladin just told him he’d fit in with most military cooks. Kaladin then tried to lift Hobber, but his body objected. He sucked in Stormlight and then carried Hobber back towards the others.[10]

Hobber fell into his new role of helping Rock in the kitchen, serving the men of Bridge Four while Rock looked on proudly. He kept his grey legs covered with a blanket, sitting on a stump the men had fashioned for him. Kaladin nodded to Hobber and raised a fist, encouraging him to fight on.[11]

Hobber continued to find his place in the kitchen as Rock’s assistant chef once the rest of Bridge Four moved to Urithiru after the Battle of Narak. One day, he traveled with the rest of Bridge Four and other prospective Windrunners to the Shattered Plains for training. While assisting Rock in the kitchen, Kaladin walked over to Hobber and handed him a gemstone. Kaladin explained he had to breathe in the Stormlight, something he himself hadn’t really known he was doing until Teft explained it to him. Hobber objected, saying he wasn’t that good with the spear and barely a passable cook. However, it was a job he could do after his was injured by the Assassin in White, and Rock was happy to have his help. Kaladin folded the gemstone in Hobber’s fingers and just asked him to try, explaining that being a Knight Radiant wasn’t about strength or skill as much as it was about heart. Kaladin told Hobber that his heart was the best of all of them.[2]

A short time later, Rock returned to the kitchen and went to hand Hobber the plates so they could begin distributing the food. However, Hobber didn’t respond to his request. Rather, he was focused on the gemstone in his hand. The energy changed and several windspren turned towards Hobber. In a moment, it seemed like everything else had faded as Hobber’s fist began to glow. Rock shouted and Hobber jumped in surprise. His jaw dropped and he stared at the now-dun sphere. He held up his hand and shouted at the other men.[2]

The bridgemen came rushing over and Kaladin ordered them to give all their gemstones to Hobber. The men scrambled to give Hobber their gemstones, and the lights dampened. Hobber cried that he could feel his toes again. He reached out for support, and Drehy and Peet helped him slip off his stool, righting him. He finally forced them back, standing precariously on his own. The men of Bridge Four celebrated, and Lopen gave the Bridge Four salute. It seemed to be something special coming from him, one of the first times Lopen had been able to make the salute. Hobber saluted back.[2]

As more and more people took to the skies and joined the Windrunners, many felt like things were changing faster than they would have liked for them to. Hobber admitted that he was afraid he couldn’t keep up with the others, which led to many others confessing their fears. Rock reminded them that while they were all afraid and felt alone, they all shared those fears and could be alone together. Hobber and the others found this comforting, with Hobber even slapping Rlain on the back.[12]

Bridge Four continued to settle into their Windrunner and guard duties, with Hobber and others sharing guard duty. While accompanying Dalinar and Navani to a meeting, the latter apologized for how boring it must have been. Hobber and Leyten both confessed they liked boring, because that meant no one was trying to kill them that day.[13] 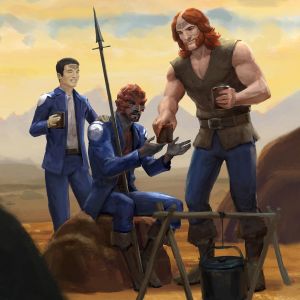 by Derek Murphy
With Rlain and Rock

Having been rescued by Kaladin, Hobber never wavers in his support of or devotion to the bridgeleader. He supports his efforts and is even the first to get a Bridge Four tattoo to cover up his slave brand. Kaladin, while strong most of the time, almost seems near tears whenever he talks to Hobber after his injury at the hands of Szeth. When Kaladin encourages Hobber to try to breathe in Stormlight, he tells Hobber that he has one of the best hearts of all of them.[2]

Rock, or Lunamor, embraces having Hobber’s support in the kitchen even though he is barely passable as a cook. After his injury that left him with dead legs, Hobber jokes that he could burn broth.[10] However, Rock appreciates his help, stating that he can always find the man where he left him.[2]

This article is still missing information. Please help The Coppermind by expanding it.
Retrieved from "https://coppermind.net/wiki/Hobber?&oldid=158350"
Categories: