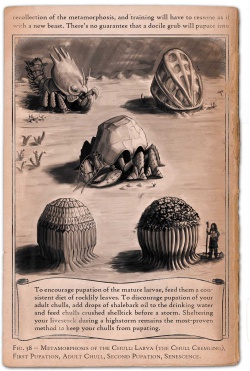 by Isaac Stewart
A depiction of the five stages of life for a chull: Larva (chull cremling), first Pupation, Adult, second Pupation, and Senescence.

Chulls are massive crustaceans with thick legs with large claws and a stone-like shell. Their carapaces are typically red.[2] Chulls have whip-like antennae that grow in pace with their shell as they age, so that the chull can sense out spaces to determine if they're large enough to pass through,[3] and beady fist-size black eyes.[4]

Chull shells are a light, porous stone created from minerals the chull consumes in its food and water and then excretes.[5] Since the shell is not alive, chulls are not hurt when their shells are cracked or shaped. In the wild, there are often plants growing in the crevices of a chull's shell.[1] Chulls pull their legs and head into their shell when they sleep, and as a result sleeping chulls look like large boulders or small hills.[6]

Chulls are generally docile creatures. They have claws that are said to be strong enough to break a man's arm, but it is very unusual for them to behave aggressively.[2] They tend to move with a slow, lumbering gait and are generally slower than humans.

They are capable of making a wide range of noises, including a gravelly bleating, trumpeting, and snorting.[7][8][9]

Chulls are omnivorous creatures. They eat everything from rockbuds to slugs to smaller crustaceans.[2] Domestic chulls are often fed grain.[10]

Chulls are considered less intelligent that horses[11] and in some cases, stubborn.[12] 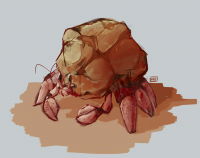 Chull are highly valued as work animals and are considered to be worth more than the average slave.[15] Some people maintain chull herds and rent their labor out on a contract basis.[16]They are slow but strong and are used to pull everything up to and including the large complex bridges Dalinar uses for chasm crossings.[16] Since their shells can be carved without harming the animal, some people sand flat places on top of a chull to ride and many carts are hooked to fittings drilled directly into their shells. Shelves and racks can also be carved into or attached directly to chull shells.[1]

Since it is lightweight and durable, chull shell is used as a crafting material. Shallan had a havah with chull-shell buttons.[17]

Chull meat is edible. It can be dried and stored as jerky.[18] In some cultures, including Herdazian and Unkalaki, chull head is considered a delicacy.[19]

Dalinar Kholin uses them to pull his bridges, rather than put the lives of bridgemen at risk.[16] 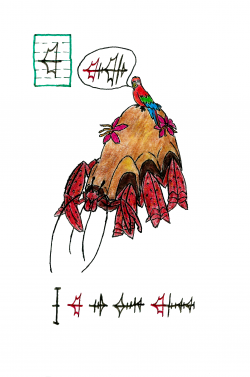 There is a tavern in Dalinar's warcamp called the "Ornery Chull."[20]

—Dalinar regarding his army.[22]

—Kaladin's impression of the lighteyes regard for him and his guards.[23]

“Storms, he was like a rat gnawing on the toes of a chull ”

This article is still missing information. Please help The Coppermind by expanding it.
Retrieved from "https://coppermind.net/wiki/Chull?&oldid=176017"
Categories: