Kabsal is a member of the Ghostbloods undercover as an ardent from the Devotary of Insight. He stays in the Palanaeum in Kharbranth on Roshar.[3] 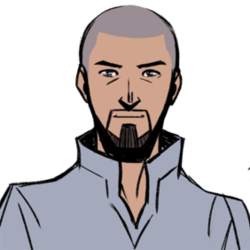 Kabsal is in his early twenties and wears simple gray ardent robes. He has a narrow face, shaven head, and a short squared beard. He has keen blue eyes. He is tall, lean, and "rather handsome." He is described as having a cultured tone, and speaks with a faint Herdazian accent.[1]

He is quick-witted, able to match intellect with Shallan and crack jokes that appeal to her sense of humor. He is also much more casual than the other ardents Shallan had met, engaging in light-hearted discussions with Shallan as well as theological ones. To Shallan, he appears confident and earnest, although in truth he is a convincing liar. In his undercover identity as an ardent, he is a rather unconventional one, engaging in behavior that ardents should not like swearing and attempting to recruit people to his devotary. Shallan finds these tendencies strange but endearing.

Sometime before 1174, Kabsal joined the Ghostbloods and went undercover as an ardent in the Palanaeum. He repeatedly requested an audience with Jasnah Kholin, but was not granted one. When visiting Jasnah's reading alcove, he met Shallan Davar, who was also waiting for Jasnah, and admired her art, as well as encouraging her to treat him less formally. After asking Shallan to mention him to Jasnah, he expressed the hope of seeing her again and left.[1]

Shallan: "You're an ardent; you're forbidden to have possessions. What did you bet?"
Kabsal: "Two deep breaths of a winter rose’s fragrance and the sunlight’s warmth on your skin. We can be rather creative at times. Years spent marinating in a monastery can do that to a man."

―Kabsal and Shallan, discussing his lost bet with Brother Lhanin[1]

He pretended to pursue romantic involvement with Shallan during her time in Kharbranth with the goal of assassinating her mentor and teacher Jasnah Kholin, a well-known atheist.[4] Shallan at first suspected he was trying to convert Jasnah, and then later believed he sought to prevent Shallan from becoming an atheist, and he encouraged these ideas to distract her from his true purpose. He claimed to have found proof of the Almighty's existence, which he demonstrated through cymatics by playing notes next to a metal plate with salt on it. As the notes were played, the salt took the shapes of different cities from the Silver Kingdoms. Jasnah saw the demonstration, knew what Kabsal was doing, and asked him if he could make the shape of Urithiru. She was unwelcoming, claiming that was what Kabsal expected and if she had been welcoming he would have been surprised and suspicious. She asked Shallan if Kabsal had asked her to steal her Soulcaster, and when Shallan expressed shock, Jasnah told her that she was used to men like Kabsal and he would eventually.[5] 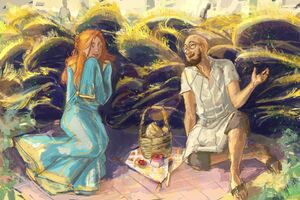 Kabsal visited Shallan often in the Palanaeum where she and Jasnah spent most of their time. He brought poisoned bread for Jasnah on all of his visits. After Shallan expressed a fondness for jam and Jasnah a dislike for it, he started bringing jam that contained an antidote for the poison on each visit.[2] When he learned that Shallan liked simberry jam, he brought a jar of it to share with her, and jokingly referenced a book called "Palates of Personality" that made connections between personality and favorite jam, and brought Shallan different jams during their relationship. He tried to get Shallan to join his devotary, despite the fact that recruitment was "frowned upon" by other ardents.[5] During one of their outings to the gardens, he hid from Taravangian and another ardent, claiming he would get in trouble for shirking his indexing duty but really not wanting his conver to be blown. Shallan asked him about Soulcasting, hoping he could help her figure out how to use Jasnah's stolen Soulcaster, but he told her that they were actually very simple to use, and all you had to do was tap a gemstone with your finger.[6]

While visiting Shallan in the hospital after her presumed suicide attempt, Kabsal succeeded in getting Jasnah to eat the poisoned bread. However, Jasnah soulcast both bread and jam out of caution, causing Kabsal and Shallan to fall ill without the antidote in the jam. Kabsal attempted to convince Shallan to eat the Soulcast jam to save her life, but because it smelled so bad she did not. Kabsal quickly died,[7] but Jasnah was able to save Shallan's life by Soulcasting her blood to remove the poison from it.[4] After the assassination attempt, Jasnah investigated Kabsal and found that he was not an ardent, but instead a member of the Ghostbloods.[3]

“The ardents in her father’s employ had all been crusty men or women in their later years, stern-eyed and impatient with children. She’d never even considered that the devotaries would attract young men like Kabsal. During these last few weeks, she’d found herself thinking of him in ways that would better have been avoided. ”

Kabsal and Shallan get along well - they both have a dry and witty sense of humor and enjoy light verbal sparring. Shallan finds Kabsal very attractive, but expresses reservations when he offers to leave the ardentia to be with her.[8] Although she often remarks upon Kabsal's impropriety when he swears or is overly casual, she doesn't mind. She enjoys his intellect and humor and sees him as a potential source of information about Soulcasting.[9] He seems to enjoy Shallan's company and tries to save her life when she eats the poisoned bread.

Kabsal uses his relationship with Shallan to get closer to Jasnah, but Jasnah is suspicious of him and is hostile. She tells Shallan that Kabsal is trying to steal her Soulcaster, and Kabsal leads Shallan to believe that he wants to be the one to convert Jasnah to Vorinism.

This article is still missing information. Please help The Coppermind by expanding it.
Retrieved from "https://coppermind.net/wiki/Kabsal?&oldid=161383"
Categories: