This page or section contains spoilers for The Lost Metal!
This information has the ability to potentially ruin elements of the plot for the reader. Proceed with caution if you have not read this book.

“I have many times asked myself why those of you here go about so brazenly with features exposed to all who would see them. ”

Iyatil is a mysterious member of the Ghostbloods, a secret organization across multiple planets across the cosmere, of which she is part of the Rosharan division. She is referred to as Mraize's babsk, and is a high-ranking member of the organization.[3][4] Though she currently lives on Roshar, she is a worldhopper and is originally from Silverlight.[5] She has Southern Scadrian ancestry[6][7] and always wears a distinctive mask.[8] 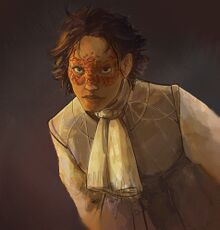 Iyatil usually wears a simple outfit of a dark brown shirt and trousers, along with an intricate belt that appears to be studded with carapace.[3][8] She does not cover her safehand, and Shallan mistook her for a male the first time they met.[8] She usually wears gloves and carries a dagger at her side.[3] When she is trailing someone, she dons a black cloak.[8] She has tan skin; she is also described as short or small,[8] although this is common for worldhoppers on Roshar since the humans there are unusually tall.[9]

She has dark, beady eyes and rarely seems to blink.[8][10] The visible part of her face is impassive; her presence is generally unsettling.[8][3] She does not reveal more information than necessary, often simply refusing to answer questions; this keeps her motivations concealed.[3][4][11]

“My mask reserves my self. Besides, it gives me the ability to adapt. ”

Iyatil's most distinguishing feature is a red-orange carapace mask that is made up of pieces, like a mosaic. The mask covers the area around her eyes; it has an angry appearance, and seems to be growing into her skin.[10] The mask, which is at least partially painted,[10] is not Invested.[12] Her mask is similar to those worn by the Hunters nation on Scadrial,[13] and that culture is part of Iyatil's heritage.[14] She considers her mask an asset[3] and never removes it; she will kill someone if they try to do so.[3] 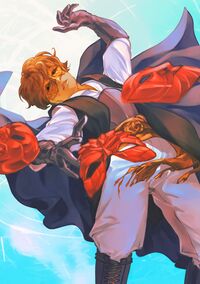 Iyatil is a worldhopper. She hails from Silverlight in the Cognitive Realm but lives on Roshar in the Physical Realm.[15] She has also been to other unidentified planets.[16] Her personal background along with her membership in both the Seventeenth Shard[2] and the Ghostbloods presumably give her a very high level of cosmere awareness.

The Ghostbloods have a clear hierarchy[17] and Iyatil appears to be one of the highest-ranking members on Roshar. She serves as a teacher and mentor for Mraize; he refers to her as his 'babsk' in local parlance, and she has supervised him on several trips off-world.[16] She is aware of people and organizations such as Gavilar and the Sons of Honor that are tampering with magic that could have larger cosmere implications, and works to investigate them.[3] She investigated Talenel[3] and sought to speak with Shalash.[18] She is empowered to negotiate on behalf of the master of the Ghostbloods, Thaidakar,[19] and keeps him apprised of the situation on Roshar since he cannot visit himself.[20] Although Thaidakar is Iyatil's master, she leads independently; Thaidakar's remote location means that he does not always have detailed knowledge of the Ghostbloods' activities.[21][22]

“Who are you really, Veil? You caught me in stealth spying upon you, and you can lose me in the streets. This is not easily accomplished.”

Iyatil is extremely stealthy[3] and can seem to appear out of nowhere in a room.[10] She stays well-informed regarding the security, schedules, and geography of the area that she is in, such as the Alethi warcamps. She is observant, skilled at tracking, and able to conceal herself, making her an effective spy and assassin.[3][4][23] She is trained in the use of several different weapons,[3][23] and she considers escaping from an Alethi monastery without assistance to be a trivial task.[4] She is also able to move "too quickly" to be chased.[23]

Whether or not Iyatil has any magical abilities is unclear. Her Scadrian heritage could theoretically enable her to use one or more of the Metallic Arts,[24][7] but there is no confirmation that she can do so.[7][25] Additionally, a side effect of the Catacendre was the need for people of Southern Scadrian heritage to use Feruchemical medallions created with Excisors in order to survive in cool temperatures;[26] it is unclear if Iyatil possesses a medallion or if she even needs one.[27] 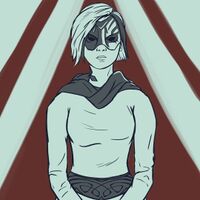 Iyatil was born in Silverlight,[15] a city of cosmere-aware people in the Cognitive Realm, supposedly alongside her brother, Dlavil.[1][28] She is of Southern Scadrian heritage,[6][7] specifically from the Hunters nation.[14] It is not known how her family or her ancestors came to live in Silverlight, but their history there is relatively recent.[13] As a people, the Hunters are known to be stern former warriors that now seek answers and secrets about the Catacendre.[13]

At some point, Iyatil was a member of the Seventeenth Shard, a mysterious organization that includes various worldhoppers. She left for unknown reasons,[2] although it is possible that she was directly recruited by the Ghostbloods.[29]

Iyatil came to live in Roshar at some point prior to 1173. Her early activities on the planet are unknown, other than her training of Mraize.[16] She was present at Shallan's first meeting with the Ghostbloods and followed Shallan after the meeting, trying to track her back to Tyn.[8] She was also present when Mraize learned of Shallan's drawing abilities and decided to give her a new mission.[10] Iyatil then decided to surveil Shallan, but she was discovered by Pattern despite her skill in spycraft. Shallan then tricked her into revealing herself with the use of Lightweaving. Iyatil was stunned, but quickly recovered and explained to Shallan that she would be investigating the recent arrival of a madman to the Alethi warcamps. She then helped Shallan infiltrate the monastery where Talenel was being held.[3]

After the Battle of Narak, she attempted to assassinate Highlord Amaram with poisoned darts and a blowgun. Her motive is unclear, but it was likely related to Amaram's activities with Restares and the Sons of Honor and his knowledge about the Ghostbloods.[30] She nearly succeeded in killing Amaram, but she was foiled by Talenel. Amaram summoned his Shardblade, but Iyatil easily escaped.[23]

During the True Desolation, Iyatil continued to work behind the scenes. Her master, Thaidakar, wanted to be able to collect and transport Stormlight. To help reach this goal, he sought control of the Oathgates.[31] He was unhappy when Iyatil informed him that this was impossible, and she and Mraize pivoted to simply gaining access to the gates. Mraize attempted to convince Raboniel to negotiate with Iyatil by giving the Fused a valuable Threnodite chain.[19] 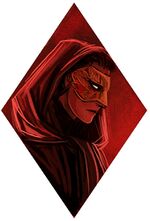 “A group of hunters working together could turn upon one another far too easily. And so, I respect my babsk, and you respect me. We do not strike against our own, and we do not negotiate upward. ”

Iyatil is Mraize's master; he uses the Thaylen term 'babsk' to describe their relationship.[11] Iyatil calls Mraize her student[3] and she closely supervised him during his training.[16] At one point, Iyatil had Mraize followed, seemingly a tradition within the Ghostbloods since the person doing the following can step in and help if needed.[31] She advises Mraize on his activities, including his recruitment of Veil,[23] and Mraize is often empowered to negotiate on Iyatil's behalf.[31] At the same time, Mraize is not bound to follow Iyatil's instructions, as the Ghostblood hierarchy allows its members to act independently.[32]

Thaidakar
Thaidakar is the master of the Ghostbloods and Iyatil seems to report to him directly.[31] While Thaidakar is very interested in the events on Roshar, there is a degree of separation between him and the local branch of the Ghostbloods.[22] Iyatil works to accomplish his goals and provides updates on the situation in Roshar.[31] However, Thaidakar's remote location means that he may not be aware of the specific activities of Iyatil and the other Ghostbloods.[21] It is unclear how Iyatil communicates with Thaidakar since he is not in the Rosharan system, but the Ghostbloods are known to use unusual communication methods and Thaidakar has also used avatars.[20]

Dlavil
Dlavil is her brother, but their exact relationship with one another is unknown.[1]

This page is complete!
This page contains all the knowledge we have on the subject at this time.
Big Smooth (talk) 19:16, 22 March 2022 (UTC)
Retrieved from "https://coppermind.net/wiki/Iyatil?&oldid=170580"
Categories: